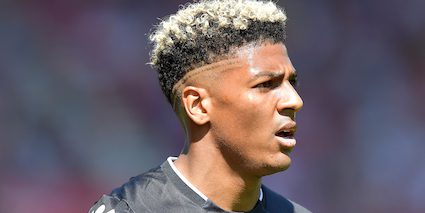 The hosts’ Pontus Silfwer initially equalised after Christian Benteke had given the Eagles the lead.

But Palace ran away with the game from then on. A brace from Patrick van Aanholt and a stunning Sullay Kaikai goal gave them a 4-1 lead at half-time, before second-half strikes from James McArthur and substitute Jason Puncheon sealed the South Londoners’  first victory of their pre-season campaign.

Clever wing play from Townsend on 13 minutes eventually led to him finding Benteke, and the striker swivelled and finished well across goal and beyond the Halmstads goalkeeper.

But the Swedish side were level three minutes later. A sweeping move found them in behind the Eagles’ back four and Silfwer was found in space to fire beyond Wayne Hennessey via the crossbar.

Benteke suffered an injury in the aftermath to his goal and was replaced by Sullay Kaikai following the equaliser. And the forward, who spent the second half of last season on loan at Charlton Athletic impressed, adding trickery and invention to a Palace attack that was previously quite one-dimensional with two traditional number nines in the Belgian and Alexander Sorloth.

A quickfire treble from Palace gave them a perhaps flattering 4-1 lead at half-time. Van Aanholt netted the first two; his first an excellent left-footed effort from the left channel after exchanging passes with James McArthur, before curling in with his right from a similar position on 40 minutes.

And the best goal of the half came two minutes later through Kaikai. The 22-year-old weaved around a couple of challenges on the left, cut inside and drilled a fantastic effort beyond the Halmstads goalkeeper.

Palace’s 11 remained the same for the beginning of the second half and they netted a fifth on the hour mark through McArthur, who received the ball from Sorloth and fired home from 25 yards.

A treble of substitutions on 65 minutes provided the Eagles with a fresher impetus having begun to tire with the same team for an hour. And it was one of those subs, Puncheon, who rounded off the scoring two minutes later with a rifled half-volley inside the penalty area.

The Eagles now face a trip to Kassam Stadium to face League One Oxford United on Saturday.