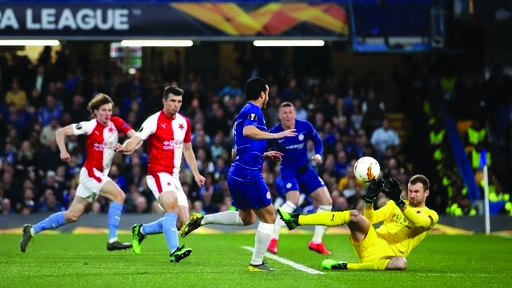 BY ERIC CUNHA at Stamford Bridge

A nervy Chelsea advanced to their first European semi-final since 2014 after surviving an almighty scare to beat Slavia Prague 4-3 at home in the Europa League, sealing a 5-3 aggregate win.

The 2013 winners were close to their clinical best in the first half at Stamford Bridge but were the polar opposite after the break and a quick-fire double by Slavia’s Petr Sevcik left Maurizio Sarri’s side reeling and home fans worried of being victims of a huge European upset.

It took the Blues just five minutes to open the scoring through Spanish winger Pedro who combined well with Olivier Giroud before chipping the ball over Ondrej Kolar.

An initially nerveless Chelsea side doubled their lead five minutes later, Pedro again involved, he remarkably hit the post from point-blank range but the ball bounced over the line off the head of a clueless Simon Deli for a farcical own goal.

It got even worse for the Czech side just two minutes later, Pedro added an assist to his opener when a grateful Giroud, who is rumoured to leave the club in the summer, tucked away a squared pass to net his 10th Europa League goal of the season.

Kepa did well to keep the scores at 3-0, when he saved low to deny Cameroonian centre-back Michel Ngadeu-Ngadjui but he was powerless to visiting Captain Tomas Soucek’s 25th minute header from the resulting corner, a sign that the Czech side were a threat going forward.

The raucous celebrations by the away fans were cut short just a minute later when an unfazed Chelsea made it 4-1, star of the show Pedro, who this time did not fluff his lines from close-range, was gifted the ball after Slavia keeper Kolar could only parry a Giroud attempt.

If Chelsea were flamboyant at the start of the first half, they were anything but in the second, Sevcik twice scored from long-range, his first, in the 51st minute beat a disappointed Arizzabalaga at his near post but the second two minutes later was a marvel, an unstoppable, audacious effort which flew into the top left corner.

Chelsea had a two-goal aggregate lead but it was the visiting fans and Jidrich Trpiskovsky’s Slavia side who had more to cheer about in the second half and would have gone to within a goal of a huge upset if Sevcik had not slipped when offered the chance to complete a stunning hat-trick.

Eden Hazard was brought off for Willian in the 65th minute, hard-hitting Slavia tackles, particularly by full-back Ondrej Kudela, is what likely gave Sarri a compelling case to substitute his talisman despite the tie seemingly hanging in the balance.

The Prague side’s 7-0 loss against Arsenal in 2007 was their heaviest defeat in Europe and their valiant second half efforts ensured that despite being knocked out, they would not endure a miserable night akin to the one at the Emirates 12 years ago.

There were vociferous claims for an away penalty in the 88th minute but Slovenian referee Damir Skomina correctly adjudged David Luiz’ handball to have taken place just outside the Chelsea box, much to the relief of the home fans.

It is ironic that partly thanks to the Blues’ inconsistent domestic form, their best chance of avoiding the Europa League next season is to win it this term but Sarri’s team will next face a stern test from German side Eintracht Frankfurt, who make the semi-finals of the competition for the first time in its current format after beating Benfica 2-0 tonight to go through on the away goals rule.

The first leg in Frankfurt’s Waldstadion will take place on May 2 before the second leg in the capital a week later.

Before the semi-finals however, Chelsea face Premier League matches against bottom-half Burnley on Monday and then Ole Gunnar Solskjaer’s Manchester United, in a key encounter in the race for the Champions League places, on April 28.

Should the Blues advance to the final in Baku on May 29, potentially against Arsenal, they would likely need a better performance than the one they produced in the second half of a remarkable game at Stamford Bridge.