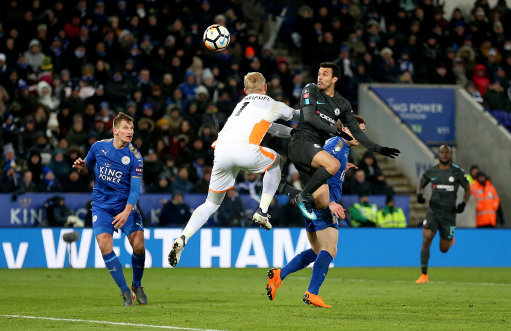 Pedro came off the Chelsea bench to score the winner that put Chelsea into the semi-final of the FA Cup against Southampton with an extra time header, but this was an underperforming Blues that had taken the lead through Alvaro Morata before letting slip the lead to Jamie Vardy.
Pedro, one of the smallest men on the pitch out jumped Harry Maguire and met N’Golo Kante’s clever pass to deftly clip a sideways header beyond a late arriving Kasper Schmeichel from six yards out.
Chelsea, who exited the Champions League in midweek to Barcelona has only the FA Cup to play for this season and they were made to work for their win over workmanlike Leicester City at the King Power Stadium tonight.
The Blues started the game slowly and Marc Albrighton was inches away from opening the scoring for the Foxes on three minutes but his clipped, curling right-footer was the wrong side, from his point of view, of Willy Caballero’s right post.
On 10 minutes Antonio Rudiger somehow got his head to a Wes Morgan goal-bound header from a Richard Mahrez corner and deflected the ball away for a corner.
The home side easily settled in to the game the better as the Blues looked disjointed and lacking in confidence.
Caballero was in action again on 20 minutes, this time getting down low, to his right to grab a daisy-cutter from 20 yards from Wilfred Nididi.
Chelsea’s first effort on target fell too underperforming Alvaro Morata on 27 minutes.
His left-footer from the edge off Leicester’s penalty area, failed to trouble Kasper Schmeichel.
Incredibly, with four minutes left on the first half clock, the Blues took the lead.
Marcos Alonso won the ball back on the edge of his own penalty area. Rudiger passed it on top Willian, who raced class. His inch-perfect pass to Morata saw the Spain striker take two touches as he inched into the Foxes penalty area, before expertly dispatching a clipped right-footer past Schmeichel.
Antonio decided to replace Timoure Bakayoko at half-time. Cesc Fabregas come on.
The home side had a brilliant chance to level the score on 52 minutes. Victor Moses let Jamie Vardy race clear but the England ace somehow conspired to head high and wide of Caballero’s crossbar, when he was unchallenged in the six-yard box.
Despite looking comfortable for most of the half, indecision in the ranks at the back allowed Vardy to equalise on 75 minutes.
Created by Mahrez on the right, Caballero twice saved from Vincent’s Iborra before Vardy tucked the ball home smartly from close range.
Morata crashed the ball onto the Foxes upright 80 minutes, but his deft flick while not going in was also the result of the striker straying into an offside position, so it wouldn’t have counted had he been more accurate.
Vardy’s right footer pinger on 84 minutes was saved by Caballero as the Blues started to fall apart as a team.
However they managed to see out the 90 minutes.
Quite why Antonio Conte opted to bring on Pedro for Willian 50 seconds into extra time was anybodies guess, but the Spain midfielder took the place of the Brazilian.
Gary Cahill replaced Andreas Christensen on 101 minutes as the Denmark defender looked to have injured his groin.
Just as Conte was about to bring on the permitted fourth substitution – Oliver Giroud on 104 min utes – man of the match N’Golo Kante sent over an inch-perfect cross and the pint-sized Pedro out jumped Wes Morgan and directed a deft header past a late-arriving Schmeichel and the ball dropped into the back of the Foxes net to restore Chelsea’s lead.
Giroud then replaced Morata.
Chelsea professionally time wasted precious minutes to see the game out and book their place at Wembley in the semi-final.