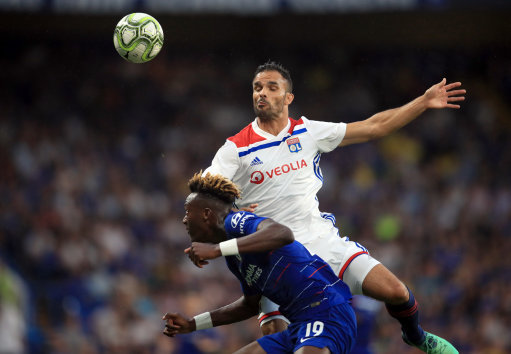 Rob Green was the unlikely hero as Chelsea beat Lyon 5-4 on penalties after a dour 0-0 this evening at Stamford Bridge in the ICC match.

The former England goalkeeper, 38 was signed on a one-year deal and is so far down the pecking order, it was a surprise to see him on the bench let alone come on in the second half as he produced a wonderful save to his left to thwart Pape Cheikh Diop, Lyon’s fifth penalty.

Eden Hazard, slotted cooly home to win the game for the Londoners.

With the imminent arrival of Kepa Arrizabalaga from Spanish outfit Athletic Bilbao tomorrow for a World Record £71million, Green’s chances of playing will be curtailed.

But for a debut it was one to recall and the fans have certainly already taken to him.

Ruben Loftus-Cheek powered his way the rough the Lyon defence on six minutes. His. One two with skipper Willian forced a corner as the Blues pined their French opponent back.

But on the break, Ferland Mendy was inches away with a piledriver of a 20-yarder, that inched over Marcin Bulka’s crossbar.

A curling Danny Drinkwater effort on 24 minutes hardly troubled Antony Lopes but it was the end of a good counter-attack by the Blues.

Bulka parried away a smart edge of the area effort by ex-Manchester United winger Memphis Depay.

Housssem Aouar should have put Lyon ahead on 35 minutes, but once free of the Chelsea rearguard, she scuffed his left-footed shot and the ball went ell wide of Bulkin’s goal.

A brilliant trademark free kick by Willian, almost broke the back of the Lyon net, But Lopes, produced a spectacular save to thwart the Brazilian.

There were no changes for either side at half-time.

A brilliant quick touch, turn and run by Loftus-Cheek raised the 14, 457 off their seats on 55 minutes, but the England midfielder was unlucky not to score as he chipped the ball past Lopes but into his side-netting.

Tammy Abraham inched past the post with a downward header a minute later.

Sarri had sen enough and made three changes – on came Ross Barkley, N’Golo Kante, and Jorginho, off came Loftus-Cheek, Drinkwater and Bakayoko.

Jorginho and Kante almost set up the opener, Jorghino’s inch-perfect through ball was picked up by Kante who forced a good save from Lopes.

Next on was gary Cahill, Marcos Alonso, Cesar Azpilicueta, Antonio Rudiger and Rob Green – off came Bulka, Christensen, Zappacosta, Ampadu and Emerson. Despite Cahill being skipper of the club, the armband remained with Hazard, given to him when Willian went off.

Chelsea have been forced to pay a world record fee for a goalkeeper £71million to land Kepa Arrizabalaga from Spanish outfit Athletic Bilbao.

The has been spotted in Madrid airport catching a flight to London ahead of a world-record £71million move to Chelsea.

While the Blues hierarchy would have preferred to snap up Stoke City Jack Butland for half that fee, They have been forced to back new boss Maurizio Sarri with a statement signing.

The 23-year-old is expected to have a medical at the Cobham training ground tomorrow and sign a five year deal. The transfer window for signing shuts on Thursday afternoon.

All this come on the back of Belgium goalkeeper Tibaut Courtois going on strike, by not returning to trading after his World Cup holiday.

Courtois is expected to sign for Real Madrid for £35million before Thursday’s deadline expires.