Just across the road from the new Nine Elms Tube station is a new Rainbow Plaque to mark a crucial location in a movie which changed perceptions in Thatcher’s Britain – and made a star of one of its leads. My Beautiful Laundrette was one of the first movies made by the infant Film Four productions, part of Channel 4. And the wash-house of the title was located where the plaque now marks the spot. TOBY PORTER reveals why it was important, and the South London roots of its star, the elusive Daniel Day-Lewis.

A plaque has been unveiled dedicated to the film My Beautiful Laundrette, made in Vauxhall in 1985.

It is in the footway in Wilcox Road, Vauxhall, at Powders laundrette, the titular location around which Stephen Frears’ movie revolved.

Starring Daniel Day-Lewis and Gordon Warnecke, with an Oscar-nominated original screenplay by Hanif Kureishi, My Beautiful Laundrette broke major ground in its bold exploration of race and sexuality in Thatcher-era London. 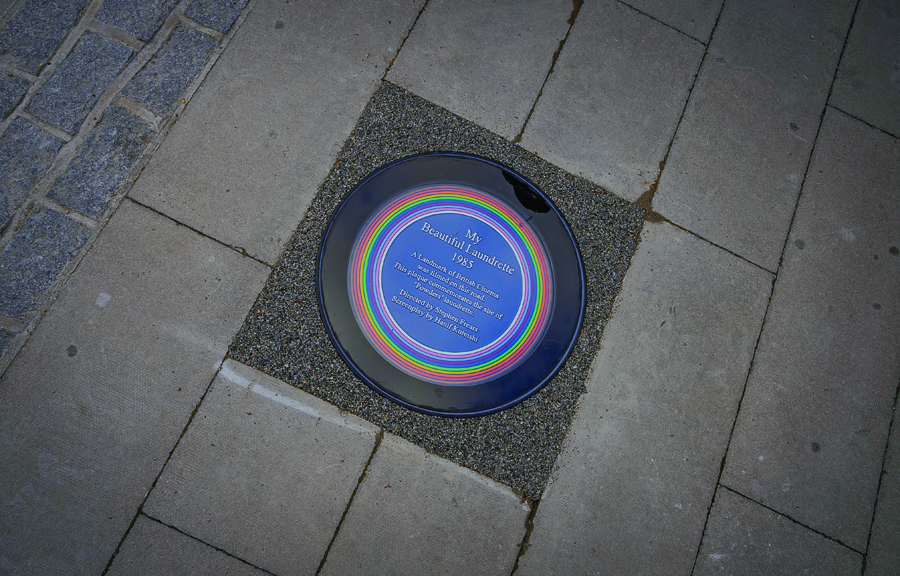 The film depicted British South Asian and LGBTQ+ people in their ordinary lives for the first time in mainstream cinema.

The story focuses on Omar, played by Warnecke, a young Pakistani man living in London, and his reunion and eventual romance with his old friend, a street punk named Johnny, played by Day-Lewis.

The two become the caretakers and business managers of a launderette originally owned by Omar’s uncle, Nasser.

The British cinema classic was filmed across Wandsworth, Battersea and Vauxhall in 1984, with the set design and the site found in Wilcox Road – right opposite the new Nine Elms Tube station.

Following a successful crowdfunding campaign – which included a special screening of the film at Clapham Picturehouse followed by a Q&A with the film’s cast and crew – £2,500 was raised by the Wandsworth LGBTQ+ Forum, Studio Voltaire and Lambeth council to install a Rainbow Plaque on September 10.

It is the first of the Rainbow plaques to incorporate the Progress Pride (2018) colours.

Mr Kureishi said: “What a privilege and honour it is to see My Beautiful Laundrette being recognised with a Rainbow Plaque.

“I’m really touched to see that the film still has such resonance within the LGBTQ+ community after all these years.

“To everyone involved in making this plaque happen, on behalf of all the cast and crew, a huge heartfelt thank you.”

David Robson, chairman of Wandsworth LGBTQ+ Forum, said: “I’m so very pleased that our wonderfully diverse LGBTQ+ community feel the same level of affection for the film that we do and share in our vision for the Rainbow Plaque project.

Councillor Claire Holland, the leader of Lambeth council, said: “This is a brilliant project and I’m delighted that the council has been able to throw its full support behind it.”

South London’s other Rainbow Plaque, dedicated to Oscar Wilde, was unveiled in 2019 on Platform 10 at Clapham Junction station because he was the victim of homophobic abuse there on November 20, 1895.

He was being transferred from Wandsworth prison to Reading gaol.

Main Pic: Some cast and crew from the film at the plaque.