Police have confirmed they shot dead a man while dealing with stabbings on Streatham High Road, which they have confirmed is a terrorist-related incident.

The shot man has since been confirmed as Sudesh Amman, 20, who was released around a week ago after serving half of his sentence of three years and four months for terror offences.

He was under active police surveillance at the time of the attack on Streatham High Road, which police believe to be an Islamist-related terrorist incident.

It has since been confirmed the man was wearing a fake bomb device.

The Metropolitan Police’s account tweeted at 3.52pm: “We can confirm that the man shot by police at around 2pm today in #Streatham High Road has been pronounced dead”.

And an update gave these details from Lucy D’Orsi, the Met’s deputy assistant commissioner for specialist operations: “At approximately 2pm on Sunday two people were stabbed in Streatham High Road, Lambeth.

“As part of a proactive Counter Terrorism operation, armed officers were in immediate attendance and shot a male suspect, who was pronounced dead at the scene. A third person also received minor injuries – believed to have been caused by glass following the discharge of the police firearm.

“A device was found strapped to the body of the suspect and specialist officers attended.

“Cordons were put in place and it was quickly established that this was a hoax device.

“Three victims have been taken to South London hospitals. One man is being treated as life-threatening, one woman has non-life threatening injuries and another woman has minor injuries.

“My thoughts are with the victims and their loved ones at this time.

“The situation has been contained and officers from the Met’s counter-terrorism command are now leading an investigation into the incident. The incident was quickly declared as a terrorist incident and we believe it to be Islamist-related.”

She added shortly after 10.40pm: “We would like to thank the numerous members of the public who assisted officers and ambulance staff this afternoon following what was a very difficult incident. I am also extremely proud of the bravery of our armed officers.”

A police update shortly after 10pm confirmed: “One man, in his 40s, is no longer in considered to be in a life-threatening condition.

“One woman, in her 50s, had non-life threatening injuries and has now been discharged from hospital.

“Another woman, in her 20s, who had minor injuries following the discharge of a police firearm is still being treated.”

The Met confirmed via Twitter at 3.13pm: “#INCIDENT A man has been shot by armed officers in #Streatham. At this stage it is believed a number of people have been stabbed. The circumstances are being assessed; the incident has been declared as terrorist-related.”

A later update said: “Three people are known to have been injured in the #Streatham attack earlier this afternoon.

One person is at hospital in a life-threatening condition. We are in the process of informing their family.”

A tweet from Prime Minister Boris Johnson at 4.01pm said: “Thank you to all emergency services responding to the incident in Streatham, which the police have now declared as terrorism-related. My thoughts are with the injured and all those affected.”

A police helicopter, vehicles, officers and at least six ambulances were swarming the area. A police update at around 2.50pm added: “Please avoid the area while the emergency services deal with the incident in #Streatham“

One photo shows a man lying face down on the pavement outside Boots with an armed officer standing nearby.

One poster showed footage of an officer in a crouch, rising to standing, with a gun.

A nurse who saw what happened told the Telegraph: “A man just went into a shop and took a knife and started stabbing people.

“The shopkeeper tried to get the knife away from him but he got away and stabbed a woman on a bicycle. The knife was really big.

“I saw three people who were injured – one of them might have been the attacker.

“I’m a nurse so I would have been willing to step in.”

A video shows one woman being walked into an ambulance, with a blanket around her.

One man said: “I heard he was stabbing ladies, one on a bicycle, not the same one seen being taken into the ambulance. They were trying to save the victims.” 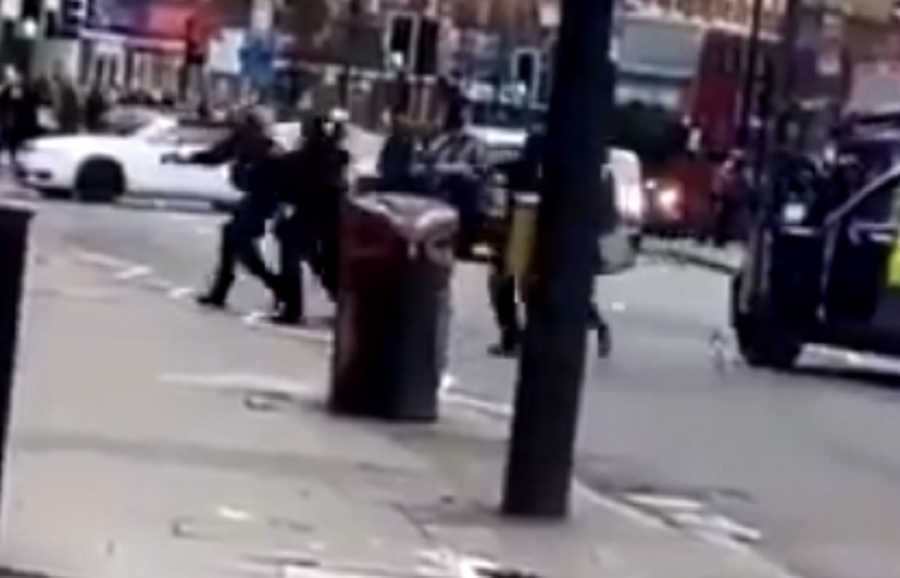 Footage circulating on Twitter appears to show a Streatham High Road cafe being evacuated by a police officer.

“Sorry guys you’re going to have to close we’ve got to evacuate I’m afraid,” the officer says. “There’s been a terrorist incident.”

A café worker responds asking for half an hour more time.

The officer responded: “Madam, a terrorist has been shot dead just down there – they’ve got a possible IED vest on them, which is a bomb, If you want to stay here for half an hour and put peoples’ lives in danger, then be my guest.

“Please listen to me and please make your way out of the shop.”

Police: “Sorry guys. You need to close. We need to evacuate – there’s been a terror incident just down the street.”

Cafe staff: “Just give us half an hour because people have to eat.”
🤦🏻‍♀️ #Streatham pic.twitter.com/O3RmYImQKC

“The woman was saying ‘he stabbed me’. The man was in a bad way. People were screaming ‘stay with us’. It was a big wound.

“The police arrived and we heard ‘bang bang bang’. I saw the attacker lying down face down outside Iceland.”

“We sent five crews, an advanced paramedic, an incident response officer and a motorcycle responder, with the first of our medics arriving in four minutes.”

But Dave Chawner tweeted: “I had to stay with someone who’d just been #stabbed in #Streatham for 30 minutes before a single ambulance arrived. I’m just over 1 mile from a hospital – I’m not having a go at anyone, but that’s not right I just hope he made it.”

But an LAS statement said: “We can confirm that our medics arrived in 4 minutes, and were initially directed to a rendezvous point until the police confirmed it was safe for them to approach patients.”

Another tweeter said: “Argos on lockdown mum currently stuck inside.”

Another tweeter, Aspiring Copper, thought the attacker armed with a knife was shot by authorised firearms officers, tweeting: “Fella was shot by AFO’s literally saw it all unfold from the bus stop. so sad”.

Streatham MP Bell Ribeiro-Addy, elected on December 12, said: “Very concerned to hear about the incident on Streatham High St. My thoughts are with those injured, their families and those who witnessed the attack.”

She added at 6.28pm: “Currently at the scene of the attack on Streatham High Rd. Police have assured me this is an isolated incident and things are under control. Thank you to all of the emergency services for their incredible efforts today.”

Green Party joint leader Jonathan Bartley, who also leads the Green group on Lambeth council, told Sky News: “There is a sense of bewilderment. There is sense of shock.

“My partner had just gone out to get some food for a late lunch. She came running down the road and said someone had just been shot at that moment … You just don’t expect that on a Sunday afternoon.”

The Lambeth council account tweeted: “We are shocked and saddened by what has been declared a terror-related incident this afternoon in Streatham. We are working closely with the Met Police, and our thoughts are with those who have been affected. Please avoid the area at this time and follow @metpoliceuk for updates”.