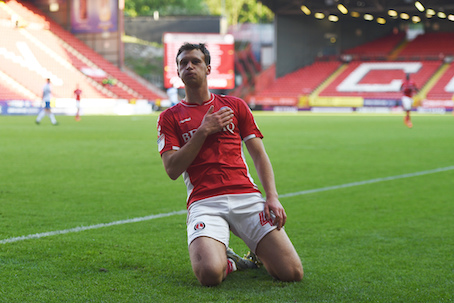 Krystian Bielik will use the power of music to get him in the mood for League One’s D-day at Wembley on Sunday.

The midfielder will have his headphones on as he prepares for Charlton’s crunch play-off final clash with Sunderland.

The on-loan Arsenal man has put in some powerhouse displays this season.  It was his goal against Rochdale which clinched a third-place finish in the table. And he scored early at The Valley in that nerve-shredding semi-final second leg against Doncaster Rovers last Friday.

But Bielik seemed to cope with the pressure better than most on a big night in SE7 – his passing staying rock solid. Asked about Sunday, he said: “I’m not nervous at all. It’s a normal game that is very important for the club, I understand this.

“The first few minutes you get on the pitch you can think ‘wow, it’s Wembley and there are 80,000 people’. But when the referee blows the whistle then you just focus on the football.

“It will be my most important game in professional football – it’s about getting promotion to a higher league. Obviously I can’t say my debut at Arsenal wasn’t important, because it was. But it wasn’t as valued as a play-off final at Wembley.

“I try and be relaxed and do my job every game. Sometimes it is easy and sometimes it is more difficult. My job in this team is to get the ball, try and play from the back, keep the ball and create chances – keep a good tempo.

“You can’t always do that, but you have to give credit to Doncaster. They pressed us really high in the first half and played really well in the second half.

“We spoke about this already in the dressing room and in a meeting with the staff – it wasn’t our best game.

“But in the end we beat them on penalties and went through, that was most important. There is one more step, one more game to go. We have worked really hard to get there and will do our best to beat Sunderland.”

“It is nothing special – headphones in my ears and just listen to my favourite music,” he said. “I try to switch off. I don’t use my phone – I only use it for music.

“Sometimes players have problems, I don’t have any problems, but in the past I have tried not to think about this. I try and focus on football 100 per cent – no friends, no family and no girlfriend. Just me and football.

“I usually listen to music that makes me ready and makes me want to switch on. It is Polish rap. You need to be ready to fight sometimes.”

The 21-year-old from Konin in Poland has played 33 matches for the Addicks since arriving at the start of the season. And he counts this as his first proper stint away from the north London giants.

“I went to Birmingham just for a few months and played 10 games,” said Bielik.

“But this season has been the hardest for me because it is my first full season in first-team football.

“It is the best season for me so far. I think I made a progression and I can’t wait for next season, to see what is waiting for me.

“I just want to get promotion to the Championship and start next season afresh, do even better. I’m really glad and happy at Charlton that we have come so far. We play at Wembley, it’s great.”

Bielik had been replaced by Chris Solly in the 110th minute of last week’s tie.

And he joined in the celebrations with Charlton fans who raced on to the pitch after Tommy Rowe’s missed spot-kick put the hosts through 4-3 in the shootout.

“I met my old friend Alex Green, who had been at Arsenal but had an injury to his shoulder which stopped him really enjoying his time there,” said Bielik. “He is a Charlton fan and he started dancing with me – we were singing the songs.

“The fans didn’t let me go so quickly to the dressing room afterwards but the security took me away.

“It wasn’t easy to watch the penalties. I can’t say I was calm, because anything can happen.”

“We can’t say we’re a bigger club then Sunderland but I think there is much bigger pressure on them to go up,” said Bielik. “This is a great chance to show our quality in the team. I know Sunderland have got some really good players, but we can beat them. It is two very good teams from the top level in the division, but everything is in our hands and legs.

“I’m quite calm. I trust the people around me. If we give 100 per cent, if we leave everything out there, then I’m sure we can beat them.”