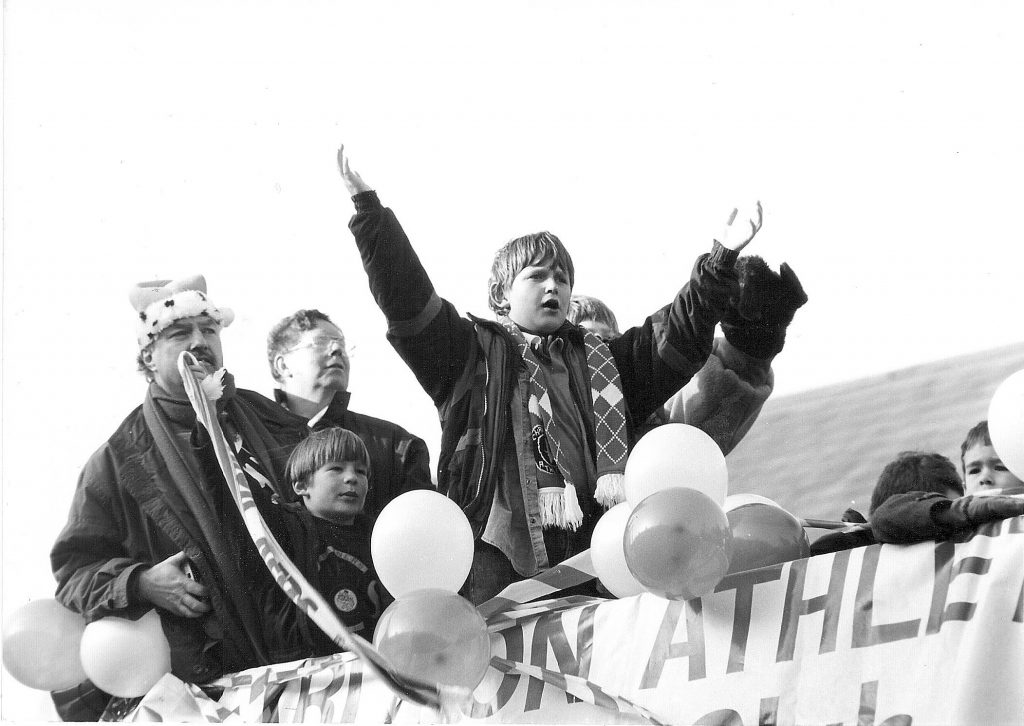 Politics and the local media played a huge part in winning a seven-year battle to bring Charlton Athletic back to their home.

Tomorrow’s match against Portsmouth sees the Addicks mark the 25th anniversary – which fell on Tuesday – of returning to The Valley.

Pompey are once again the opposition. But the decades which have followed that historic meeting – Colin Walsh scoring for the hosts in a 1-0 win – have seen the stadium developed to new levels.

Rick Everitt, whose Battle for the Valley book is a superb documentation of the highs and lows as fans fought to end their ground-sharing at Selhurst Park and Upton Park, is well-placed to assess the big turning points in the campaign waged.

It was our sister paper The Mercury which lit the fire. And also kept fanning the flames to keep the club’s seven-year absence from the borough on the public agenda.

“Up until that point there was a lot of unrest but no focus to it. It showed the depth of feeling about the situation. Although 15,000 signatures doesn’t sound a huge number, it was a big figure compared to the gates we had been getting at Selhurst Park and The Valley.

“That changed the atmosphere. There was a sense the fans could do something about it.

“It couldn’t have shown how much people cared in a more graphic way. In some senses the petition was kicking an open door, but until you demonstrate it you don’t know that. There was no social media then, no internet and no way of communication between fans. There wasn’t even a fanzine until the late 1980s.

“The local press was a huge way for fans to understand each other’s opinions.

“I’d go as far as to say without Peter Cordwell, the sports editor at The Mercury, capturing that emotion then I’m not sure the campaign would have taken off and all that then followed on from it.”

The pugnacious paper would not let the issue lie. When Greenwich Council refused planning for a redevelopment scheme the fans formed the Valley Party and took 14,838 votes in the 1990 local elections.

Everitt was one of the main organisers of the party, allow with fellow supporters’ club members Steve Dixon, Richard Hunt and Roy King.

Everitt, editor of Voice of the Valley fanzine since 1988, said: “The squeeze on the votes caused Simon Oelman, the chair of the planning committee, to lose his seat to the SDP. That was a hugely unexpected result on the night.

“The Labour party were quite angry about that. It got quite heated and police got involved. The local council and some of the residents would say the people who wanted Charlton to come back lived in Bexley, Croydon and Kent. But they were badly damaged at the ballot box. There were other seats they lost to the Tories as a result of the squeeze. They totally underestimated Charlton fans and the ability to run a professional campaign.

“We had all the poster sites around Greenwich. As a politician myself, the power of the ballot box should never be underestimated. Politicians are always afraid of what voters can do to them on election day. Having that demonstrated to them focused their minds very nicely. “What I would say is that it is very easy to paint a narrative as heroic fans against Greenwich Council. It was a lot more complicated and Charlton were not always in the right. Their original stadium scheme which was turned down was not progressed in the right way with the council in the first place. There were faults on both sides.

“Even the directors will tell you the Valley Party was an absolutely critical event in terms of making the return possible.”

A VIP scheme launched in June 1992 saw fans raise £1million. It included 10-year season tickets and a seat on the board. Steve Clarke, who led the election campaign, was the first VIP director. Six fans did the role in the next 15 years.

“The club had to put a statement out to stay away from Floyd Road because so many people were coming down to watch the construction traffic,” recalls Everitt. “There was a wire fence, so you could see what was going on. People were so excited about it.

“The irony is when they played the first match the ground was in a terrible state. They had done all the things necessary to get it open but the West Stand was a horrible, temporary construction. The East Stand was closed and a mess. But it was the necessary first step.”

“It had rained nearly every day and it delayed some of the work – but then on the day of the match it was brilliantly sunny and crisp,” said Everitt.

“It was almost spiritual. It lit the place up. There was a huge metal walkway along the middle of the East Terrace so fans could get to the Jimmy Seed Stand from Harvey Garden. I can remember the sun shining off the metal parts of it. It was an extraordinary, unreal feeling that it was actually going to plan.

“It had been promised for so long, there had been so many different obstacles that you expected it to fail at the last – a problem with a safety certificate, something collapsed or it snowed. “It wasn’t until you walked into the ground that you could finally believe it was going to take place.

“There was nothing like it. There is still nothing ever like it. Clubs don’t go back to ground they have abandoned. AFC Wimbledon are going back to Plough Lane but a slightly different site.”

That’s exactly why it is still celebrated so loudly – and proudly – on every anniversary.