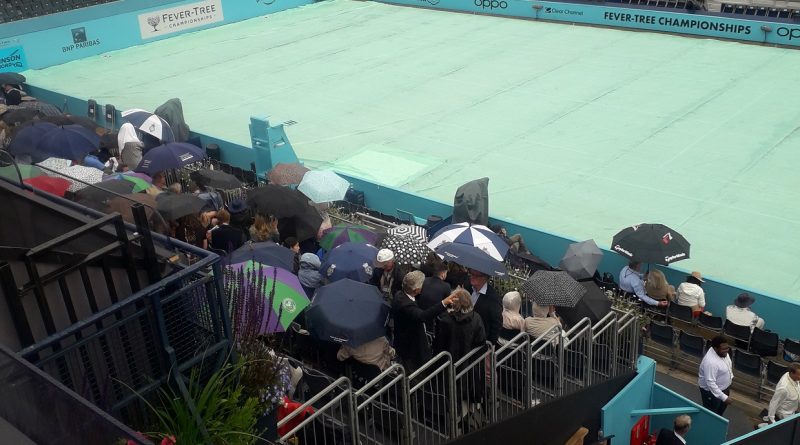 Fans waited patiently and hopefully when the rain eased to suggest play might get under way in mid-afternoon, but further heavy downpours put paid to the day – most spectators having given up the ghost and left long before the 5pm announcement that play had been cancelled for the day.

The refunds due will be scant consolation to those looking forward to a compelling-looking schedule.

Wild card Dan Evans was due to face Swiss evergreen Stan Wawrinka, with the nation’s number one, Kyle Edmund, lined up against the 20-year-old Greek sensation Stefanos Tsitsipas – who reached the Australian Open semi-finals in January.

Meanwhile, another wild card, Jay Clarke from Derby – another just out of his teens – will have to wait for his moment. He is paired with France’s Lucas Pouille, who also reached this year’s Aussie Open semi-finals.

The delayed contest between the hugely popular Juan Martin Del Potro and Denis Shapovalov of Canada should also be well worth catching, when it finally gets under way.

Queen’s Club’s capacity for attracting some of the very best names in men’s tennis was offering to serve up a mouth-watering quarter-final line-up on Friday, ahead of the weekend finale, albeit without three of the biggest names.

Roger Federer – forever tied in to the rival pre-Wimbledon grass court tournament at Halle, Germany – has been the only obvious absentee over the years.

And this year, Rafael Nadal and Novak Djokovic, who have both appeared at the Barons Court championships in previous years, are missing. But even with both men opting to rest after the French Open and spurn the opportunity to get into the grass court groove, this year’s Fever-Tree Championships promise much.

Cilic is seeded to meet Russian Daniil Medvedev in the last eight, with Tsitsipas drawn to play Canada’s Felix Auger-Aliassime; Argentine Del Potro colliding with Milos Raonic of Canada, and Wawrinka up against last year’s beaten Wimbledon finalist, Kevin Anderson of South Africa, who battled back from a set down to beat Brit Cameron Norrie in Monday’s opening round.

Almost certainly it won’t pan out quite like that by the time we get to the business-end of the competition. Auger-Aliassime first has to overcome Grigor Dimitrov and might then have the maverick Aussie Nick Kyrgios to get past in order to conform to the seedings.

Defending champion Cilic, a finalist the past two years at Queen’s, won his first round tie against Chilean Cristian Garin in straight sets to set up a second round match against another South American, the Argentinian Diego Schwartzman.

With the competition winner receiving close to 500,000 euros for a week’s work, the attractions of taking part are obvious, although adjusting to the bounce of English lawns ahead of Wimbledon has always been an important reason in itself at the end of the clay court season.

This year, though, plenty of interest will be switched to the doubles – or one doubles match in particular, as five-times singles winner Andy Murray takes his first tentative steps back into the competitive arena following hip surgery at the start of the year.

Mind you, even that is in doubt tomorrow as doubles partner Feliciano Lopez will have to play a singles match against Hungarian Marton Fucsovics before any consideration can be given to competing in the doubles.

It remains to be seen whether Murray, who first underlined his potential as a youngster on these west London courts, can ever compete seriously again for the big prizes, but he will enjoy trying, now he is pain-free again.

He and Lopez are due to take on Colombian pair Juan Sebastian Cabal and Robert Farah, who are top seeds in this year’s competition.
Advertisements