Tooting born superbike racer, Gino Rea had his best weekend of his British Superbike career, storming to two wins and a fourth place finish in mixed conditions on the Donington Park GP circuit in round ten of the championship.

The 31 year old seemed at ease in the mixed conditions in Friday’s practice sessions, rising as high as third fastest before topping the timing sheets in Saturday’s qualifying to take his second pole of the season.

The weather couldn’t have been worse for race one, held on the Saturday but Rea was in his element as he led from the lights and started to pull away from the chasing pack. 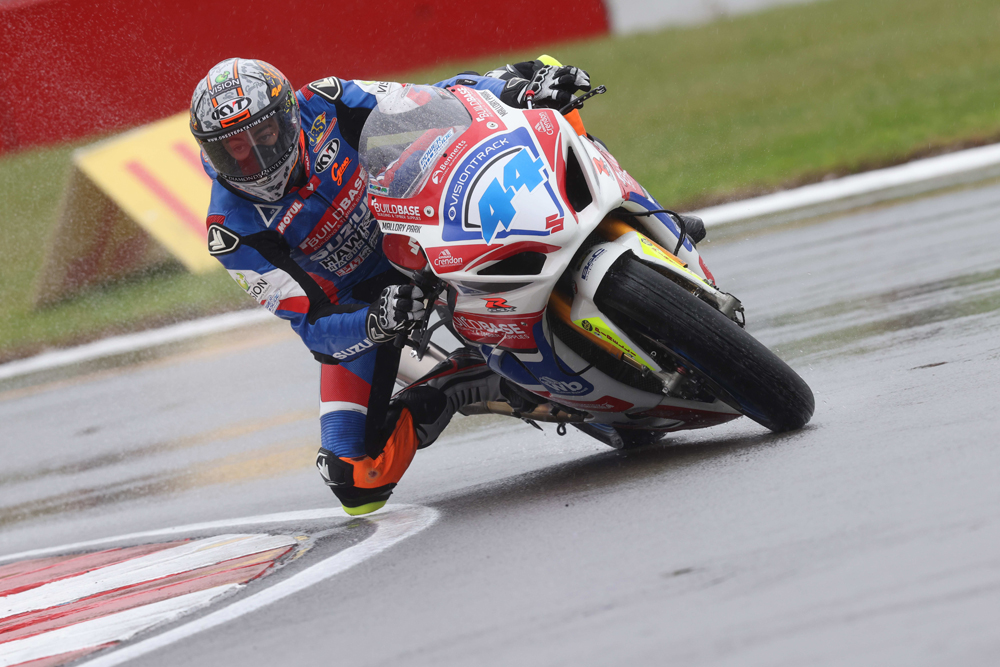 Whilst all around him, others were losing their heads (and their bikes), Rea kept his cool and stretched his lead even further.

With two laps to go the Buildbase Suzuki rider had a cushion of over eight seconds to the fight for second place, headed by Kyle Ryde on the RICH Energy OMG Racing BMW and rolled off the throttle to bring the bike home for his first BSB podium and victory by 2.016 seconds. 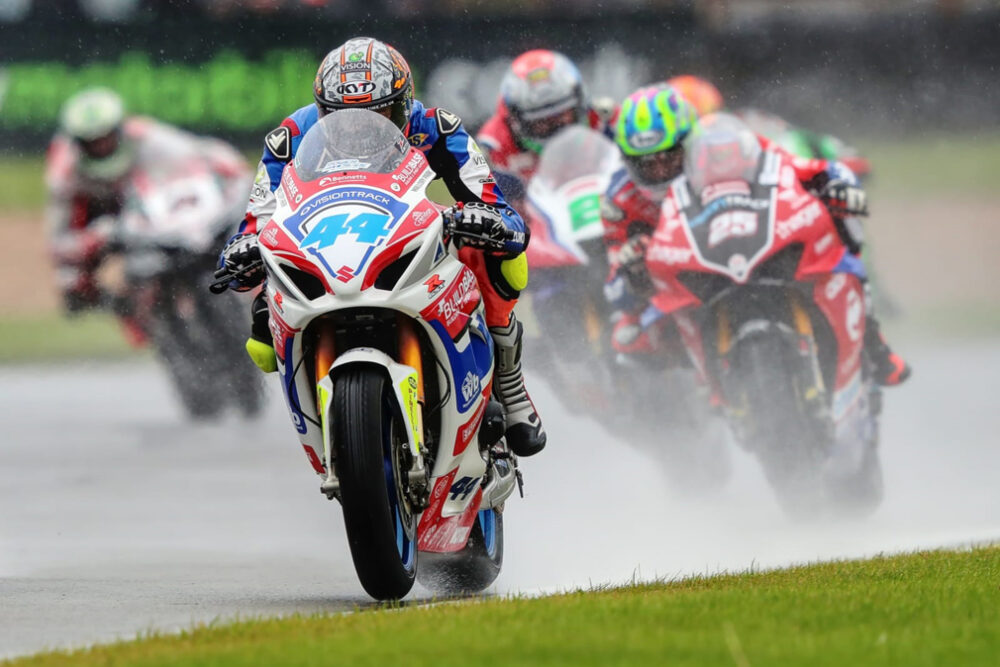 Starting on pole in dry conditions for the first of Sunday’s two races, Rea got his customary fast start to lead but it was the Kawasaki of teenager Storm Stacey, who surprised everyone as he dived through to lead of his first ever BSB race. 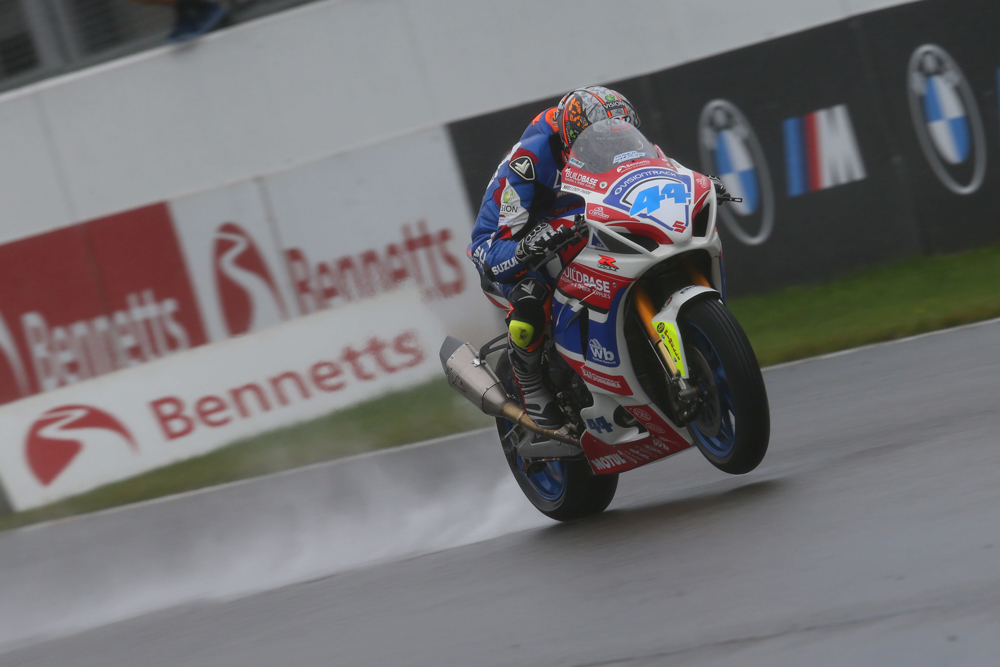 Taking little time to re-establish himself at the head of the field Rea put the hammer down but the pack was able to follow him in the dry conditions and on lap six of twenty, the BMW of Danny Buchan slipped past into the lead with the Ducati of Christian Iddon following him through a lap later.

Not giving up, by the start of lap nine, Rea was the fastest of the top three riders covered by 0.622 seconds with 2020 champion, Josh Brookes keeping him in close company. 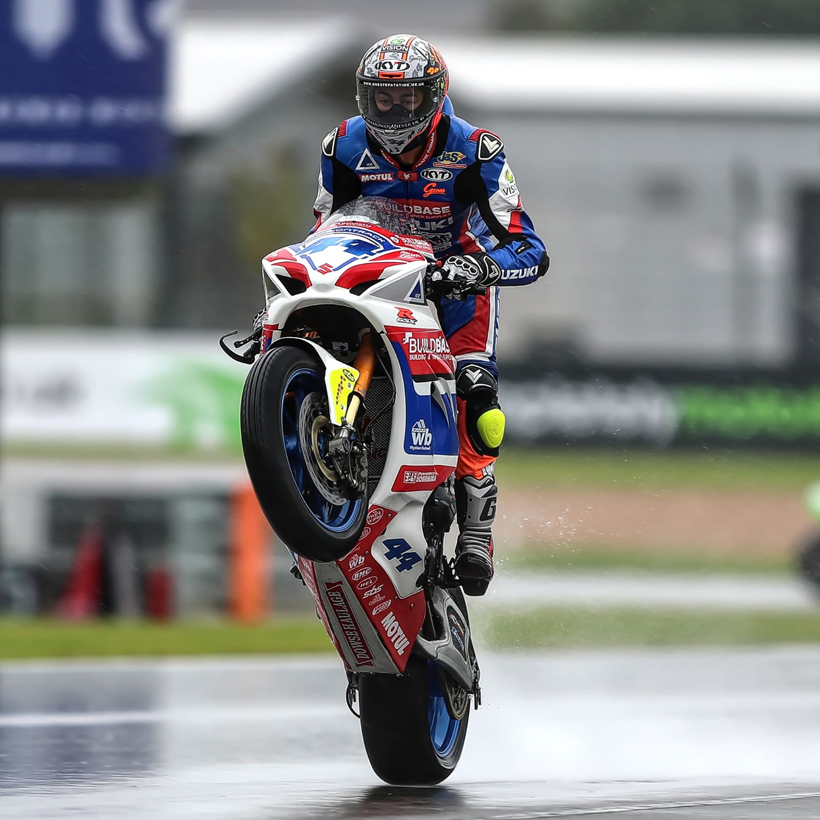 By midrace, there’s nothing between the top three but championship leader Tarran MacKenzie had moved into fourth on the McAMS Yamaha, looking menacing.

Five laps to go and MacKenzie made his move to demote Rea off the podium but Rea wasn’t about to give up another trophy that easily.

Two laps left and MacKenzie shuffled Iddon back to third into the clutches of Rea who was desperate to finish on the podium. 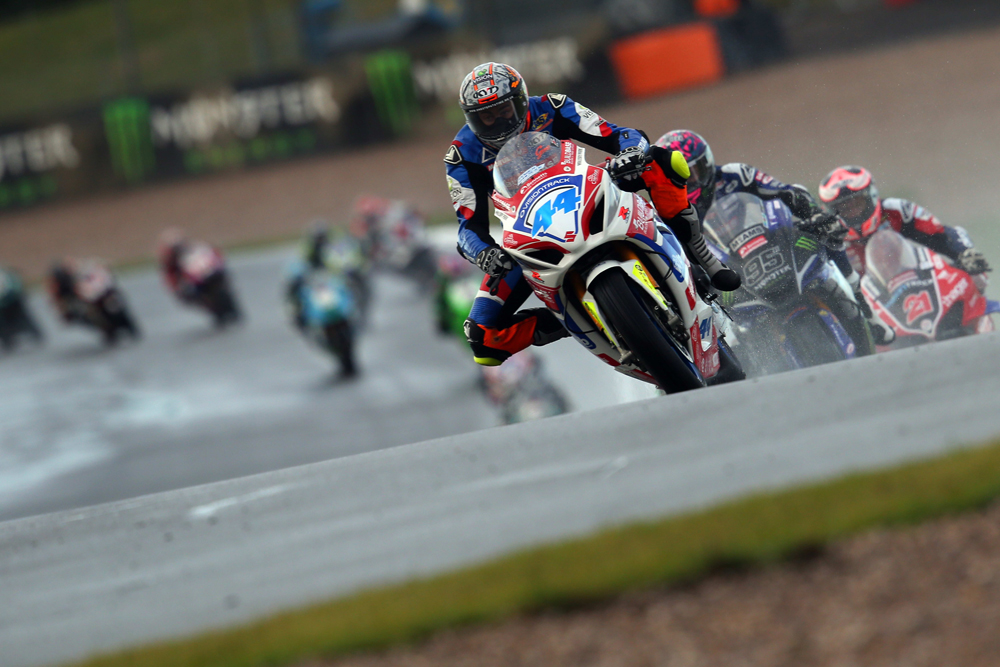 Try as he might, Rea couldn’t get past the Ducati of Iddon and brought his Suzuki home in a respectable fourth, just 2.031 seconds off the win and with a fastest lap time good enough for third place on the grid for the last race of the day.

The skies opened up once more for the final race of the weekend and Rea used his front row start to his advantage, streaming into the lead and much like Saturday, controlled the race from the front to take a comfortable win after 15 laps, 2.635 seconds ahead of Iddon and a fastest lap of 1:45.148, 0.862 quicker than the next fastest rider. 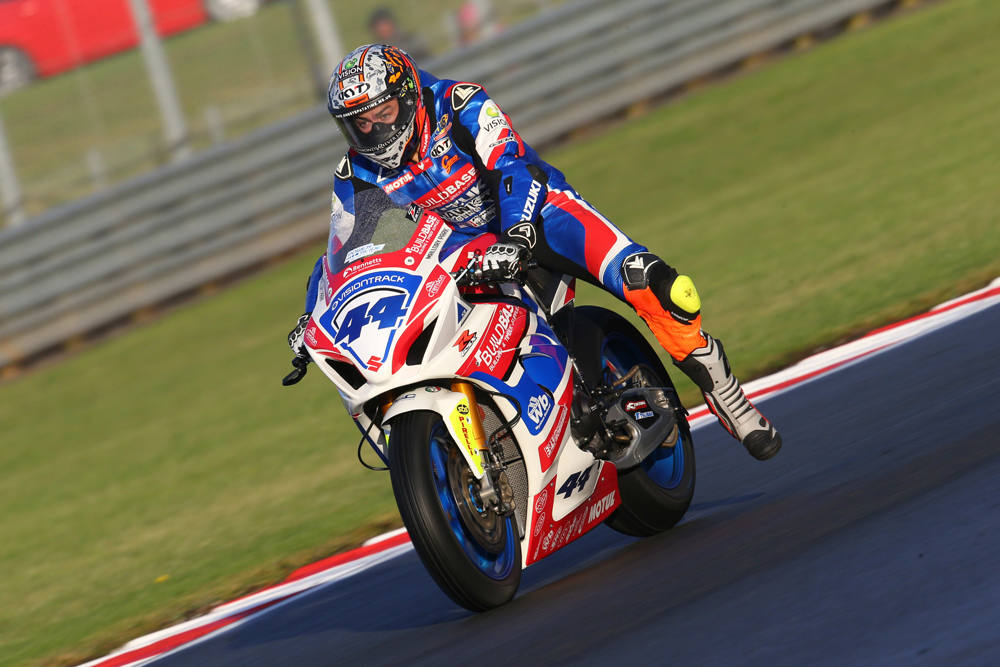 “Incredible weekend.” said Rea, “Don’t know where to start. Friday started off really well and didn’t end well with a big crash at Craner’s but the team did a great job to rebuild the bike and get it like new for Saturday. 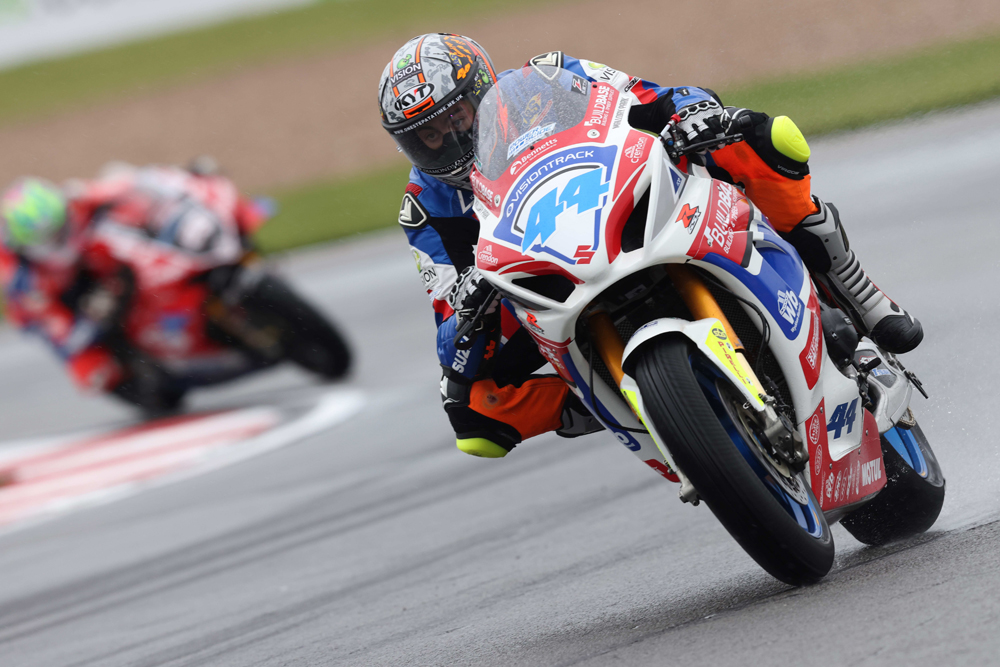 “Because of that, I had to go through qualifying one and was fastest in that in the dry and felt pretty good. Then it rained for qualifying two and I was able to put it on pole which was really nice.

“That carried over into the race and I was able to open up an eight second lead and just controlled it from there until the end. 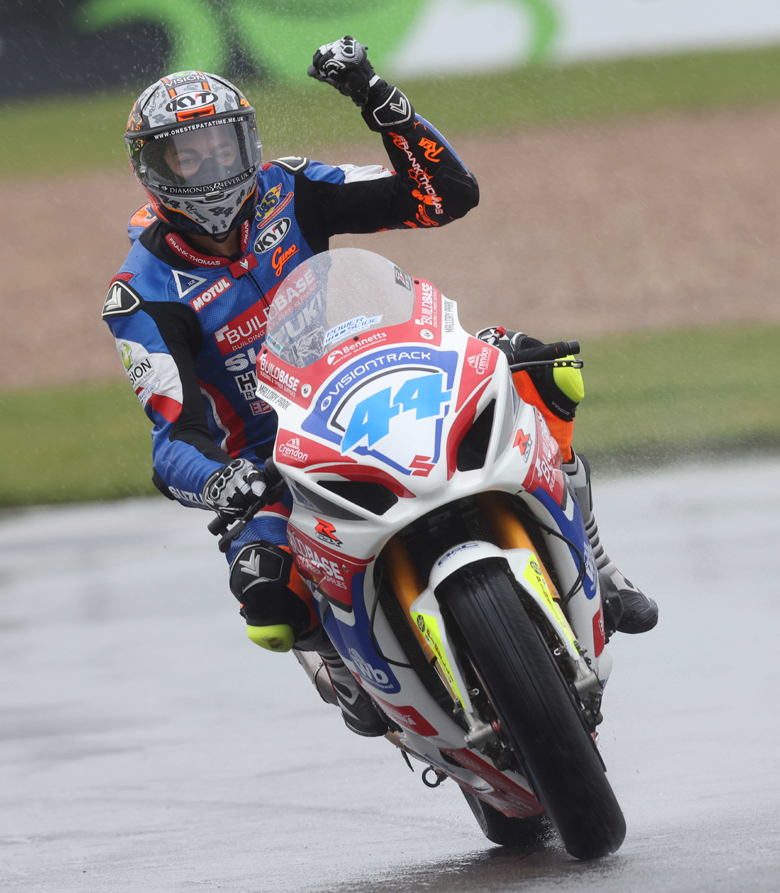 “It was a big relief to get my first podium and repay the team with a good result after all their efforts this year and to win it was the cheer on top.

“That form carried over to today (Sunday). I was fast again in the dry, just off the podium in fourth and with a few chassis changes for the last race, if it had been dry I think I’d have had another really strong race.

“It rained (in the final race) and I went out there and did the best I could and I felt really good and set the pace from the front and managed to do my fastest laps towards the end because it was quite funny, I couldn’t see my pit board because of the glare as the sun was going down so I didn’t know if I had a gap or how many people were behind me so I put my head down and charged ’til the end and was able to get the win.

“Double win and a fourth, couldn’t be happier.” 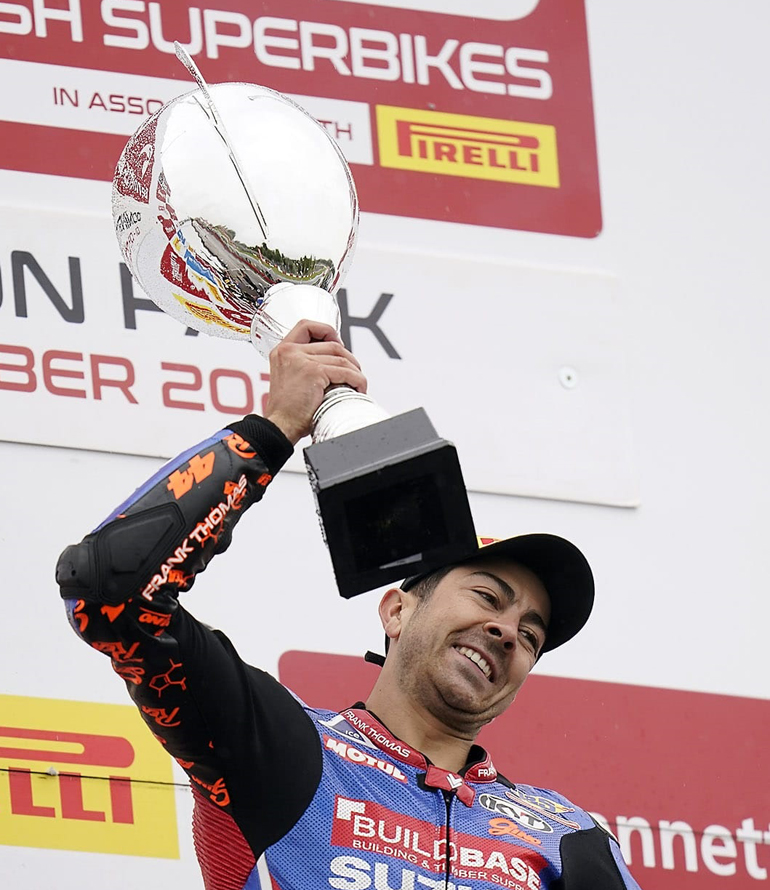 The final round of the championship is at Brands Hatch on the 15-17th October.