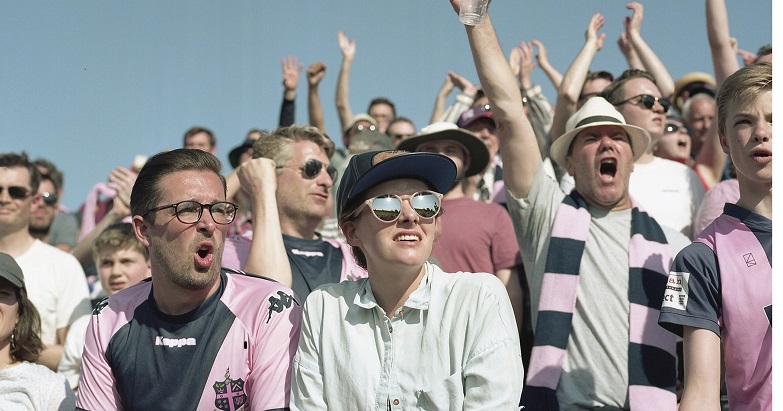 The Beautiful Game celebrates Dulwich Hamlet Football Club’s triumphant season which culminated in promotion via a victory on penalties in a play-off final in May.

It was a season of two halves: the work began at Champion Hill, where the South London team have played at since 1912.

But then the team were evicted from their home of more than 100 years by Meadow Residential, the American property developer which now owns the land.

Hamlet were in danger of blowing their chances of promotion again – they had been beaten in the play-offs three years in a row – until arch rivals Tooting & Mitcham United gallantly offered to share their KNK stadium, at Imperial Fields, Mitcham.

Despite the turmoil, they were still in with a chance of winning the league until a few weeks before the season ended.

They finished second, behind moneybags Billericay, and sealed promotion to the National League South via a nerve-shreddingly tense penalty shoot-out at their new ‘home’ ground on May 7.

This exhibition charts that turbulent season through the eyes of two photographers, Sam Mellish and Duncan Palmer.

Mr Mellish, whose books include Roadside Britain, is a freelance editorial photographer.

This year, he joined Team GB as they competed in the 2018 Winter Olympic Games in Pyeongchang, South Korea.

The work was part of an 18-month documentary, following GB Park and Pipe, the freestyle ski and snowboard Olympic division, as they trained and competed on the international circuit.

Mr Mellish, who has done work for Vans, Lloyds Bank Foundation, Lambeth council and Team GB, said: “When I began shooting The Beautiful Game, I was also working on a long-term project with GB Park & Pipe, for the Olympics.

I was travelling a fair bit, and wanted a project I could also work on between trips. I had heard about Dulwich Hamlet shortly after moving to West Norwood.

My dad was a professional footballer in his youth, he played for Southend and then Ipswich Town.

He actually played against Dulwich Hamlet later in his career, when playing for Harwich FC.  My mum still has the programme.

“I guess this work is a nod to his first career. I decided to limit myself to two rolls per game.

I did manage to get to about 12 or 13 games during the season, including some of the protests when they were sadly evicted from Champion Hill – I was in South Korea at the time.

“When they reached the play-offs, I shot both play off games and some of the celebrations. I got to know Duncan and we decided to put on an exhibition celebrating the team’s promotion.”

Mr Palmer, a freelance photographer and cycling instructor, has been the club’s official photographer for the past three seasons. He said: “Since 2014 I have built up a large body of photographs that I have always wanted to share further.

“Last season seemed to run like a movie script that culminated in reaching the play-off final ‘at home’ at arch-rivals Tooting and Mitcham’s KNK Stadium.

We eventually won promotion on a penalty shoot-out and celebrated in style on the Goose Green roundabout.

“The 2017-18 season was such an epic one of highs and lows that I felt had to be documented and shared with the fans who essentially kept this amazing football club going.

“This exhibition is a wonderful chance to relive the drama of the last year and to allow everyone involved with the club to see its story displayed in an exhibition.

“I’m delighted to be able to work with Sam on this exhibition and to showcase my work at Brick Brewery. I hope to be able to one day release a book of my photographs from last season… it was very difficult to choose just 20 for display in The Beautiful Game.”