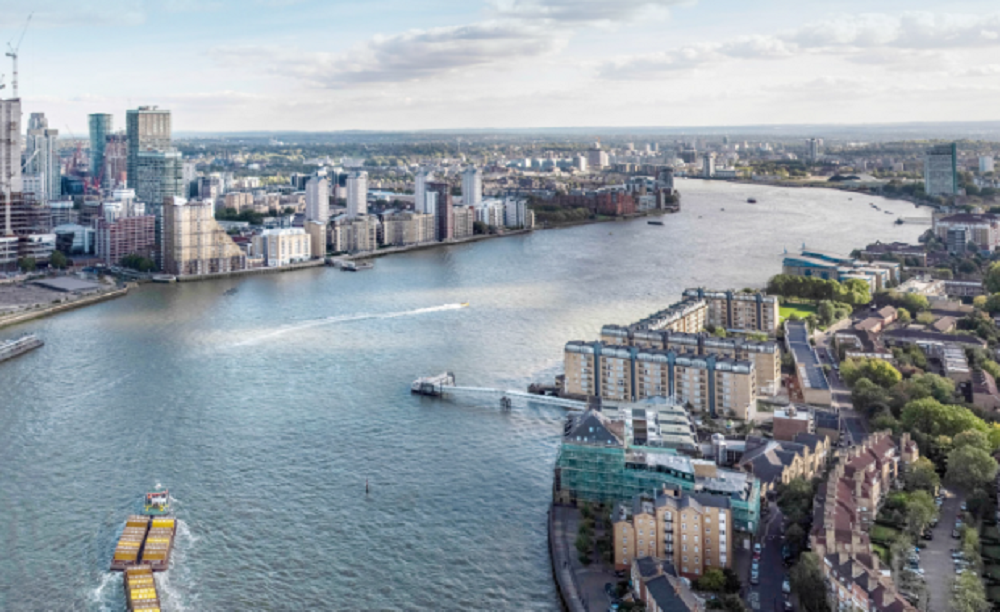 Plans for a new river crossing over the Thames in south-east London were given a massive boost today with a huge majority of those surveyed in the area backing it.

Transport for London (TfL) will now draw up more detailed designs and a construction timeline for the pedestrian and cycle bridge between Rotherhithe and Canary Wharf.
Results of a consultation were published this morning, Wednesday – and 93 per cent of the 6,093 responses were in favour of the new crossing.
TfL’s provisional preferred option of a navigable bridge was supported by 85 per cent of people who responded, and the northern landing between Nelson Dock and Westferry Circus got the strongest support.

The span would link existing and planned cycle routes on both sides of the river, and is expected to enhance growth in east London, Canada Water and the Isle of Dogs by providing a useful alternative to the Jubilee Line.

There are currently few crossings east of Tower Bridge so reaching key destinations such as Canary Wharf and Canada Water can be hard.
Greenwich Foot Tunnel is already full at peak times and the Rotherhithe Tunnel has narrow footpaths and heavy road traffic.

Deputy mayor for transport, Val Shawcross, said: “I’m delighted that thousands of people took part in the consultation, and have given us such overwhelming support for a new walking and cycling crossing between Rotherhithe and Canary Wharf.

“With its growing population, a new river crossing is much needed in this part of east London, providing vital new connections for residents, businesses and commuters around Canary Wharf. Our plans should enable thousands more people to make walking and cycling a part of their everyday lives, improving life for everyone.”
Gareth Powell, managing director of surface transport at TfL, said: “We are now working with Atkins, our design and engineering consultants, and local stakeholders to develop an accessible and achievable crossing that links to new and proposed walking and cycling routes on both sides of the river.”

Mayor of Tower Hamlets John Biggs said: “I am pleased that the vast majority of responses to the consultation on the Rotherhithe to Canary Wharf crossing have backed the bridge.I welcome the plans to improve pedestrian and cycling access in the Borough and look forward to working with TfL as the plans progress”

Cllr Mark Williams, cabinet member for regeneration and new homes at Southwark council, said: “The area around Rotherhithe and Canada Water is woefully lacking in river crossings that proactively encourage more sustainable forms of transport, like cycling and walking. With our regeneration plans looking to bring more homes, retail, leisure and culture facilities to the area, we welcome the new crossing that will help bring people across the Thames and into our borough, as well as helping our residents get better, easier access to jobs and opportunities across the water. This will also tie in with Southwark’s ever growing cycle highway infrastructure.”

The delivery of a new walking and cycling crossing in east London is part of a wide range of measures to promote active travel being delivered by the Mayor, TfL and the boroughs across London. Last year TfL consulted on plans to introduce Cycle Superhighway 4, which when delivered would be the first high-quality segregated cycle route to south-east London.

The route would see the redesign of the Rotherhithe Roundabout, which was identified as a priority as part of the Mayor’s Safer Junctions programme. It will also connect to the wider cycling network, connecting with Quietway 14 via a segregated cycle lane on Tanner Street, which provides a convenient route onwards to the North-South Cycle Superhighway at Southwark.‎
TfL and the boroughs are also working on a range of new cycle routes across London, including an 8km route between Hackney and the Isle of Dogs, and a 4km route from Peckham to Rotherhithe. Together with the proposed crossing between Rotherhithe and Canary Wharf they would create a continuous 12km orbital cycle route, helping thousands of cycling journeys between south and east London every day.

A navigable bridge remains TfL’s preference, but no final decisions have been made on any specific aspects of design or location. TfL, with support from Atkins, will be exploring a number of different parameters to inform a final design option. TfL hopes to be in a position to hold a second consultation on the designs for the crossing later in 2018. This would allow local residents, visitors and commuters to comment on the proposed designs before they are completed and submitted as part of a consents application in 2019.
Nik Randall from Southwark dreamed up the idea of the bridge in 2013 after talking to a friend who cycled to work at Canary Wharf and could only cross the Thames at Greenwich or Tower Bridge.

Mr Randall travelled along the river, looking at maps, trying to find the best location for a bridge which both pedestrians and cyclists could use. Little did he know the idea had already been suggested years before by cycling and walking campaigners Sustrans – who devised a very similar idea when London was confirmed in 2006 as the host for the 2012 Olympics.
Sustrains is now co-operating with Mr Randall’s firm, ReForm Architects, based in Union Street, Borough, on the campaign to build the bridge, between Durand’s Wharf on the Rotherhithe side to the West India Dock Impounding Station at Canary Wharf.

The project moved a step closer last summer when London Mayor Sadiq Khan appointed Knight Architects and consultants Arcadis to draw up a brief for the scheme.
Some have seen the appointment as a snub to Mr Randall and his design.

But Mr Randall believes Knight Architects will draw up a brief, which will then be open to bids from other architects as part of a proper, transparent and public tendering process which Mr Khan will oversee, learning lessons from how the now-scrapped Garden Bridge failed.

Mr Randall said last September: “We believe Transport for London (TfL) is using other consultants to help them form a brief which will then form part of the tender information for contractors. They may also be preparing a design to illustrate that it is possible to build a bridge in this location, which is normal for bridge procurement. That doesn’t mean our design has been discarded as we expect TfL to ask contractors to propose their own designs. We have a very strong team with a proven design that’s proved extremely popular.”

The structure for cyclists and pedestrians – dubbed the Brunel Bridge after Britain’s most famous engineer – would become the 11th public above ground Thames crossing.
And it would link the more rundown area of the peninsula to the Canary Wharf’s massive banking sector buildings.

The scheme is being touted as part of the £2billion Canada Water development, a plan for 3,500 homes, shops and a leisure centre which could be built in Rotherhithe over the next 15 years.
The new bridge would bring the DLR, Crossrail, Canary Wharf and Rotherhithe within cycling distance of each other. It would also save cyclists from having to pedal through tunnels or the Woolwich foot tunnel and ferry.

Cycle campaigners Sustrans’ London director Matt Winfield said last year of the bridge: “It would give people the safe, car-free and clean commute they need.”