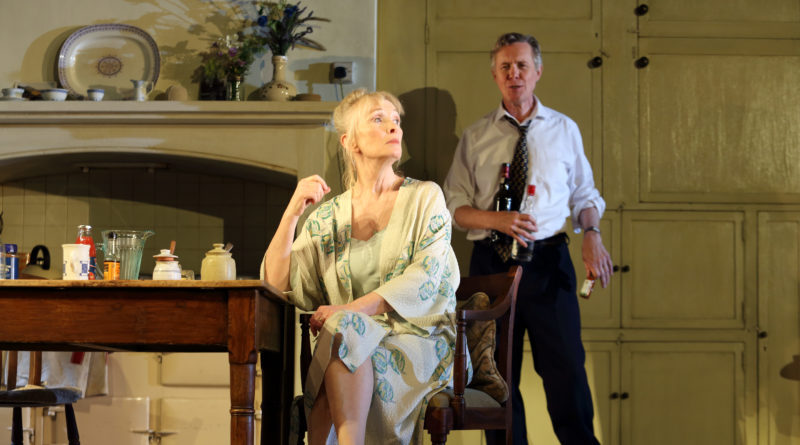 Last night at 7pm the press night performance of Simon Woods’ debut play HANSARD began at the National Theatre. If you take a look at Hansard itself (the published record of all speeches, debates and votes that take place in parliament) for the same time last night, at that same moment Jeremy Corbyn was calling on MPs to support a cross-party motion to derail the Prime Minister’s approach to Brexit negotiations. The political machinations of recent weeks are astonishing, with a Prime Minister winning his party’s support to take on the leadership by an overwhelming majority and immediately alienating the house with plans to prorogue parliament for an unprecedented 5 weeks and reduce the window for discussions on Brexit. Now, with the motion carried and the Prime Minister defeated, a snap general election may follow.

At times of political or social upheaval, theatre has a major role to play in investigating, interrogating, interpreting and commenting on current events. However, Woods’ has chosen to set his play in 1988, around the time that Section 28 – the law forbidding the promotion in schools of “the acceptability of homosexuality” – was being debated. Robin Hesketh MP (played by Alex Jennings) is the Conservative MP promoting the bill, while his liberal wife Diana (Lindsay Duncan) is full of contempt for all things Tory. It is unfortunate for Woods that his play is being produced at such a moment of political upheaval – as the real-time drama unfolding in the House of Commons cannot fail to overshadow his staging of politics from 30 years ago.

Jennings and Duncan play a couple who could have been lifted out of a play by Beckett (trapped with one another whether they like it or not, and playing out a vaguely theatrical, playful antagonism towards one another), Coward (a wealthy married couple spar over politics and home-life with a barrage of witty one-liners) or The Good Life (of course they love each other, even though they infuriate each other). The script is full of crowd-pleasing one-liners, with the audience told very clearly what they think about things (if we were in any doubt that Conservatives are ‘bad’ and socialists are ‘good’, Hesketh’s condemnation of the theatre and all who attend makes it all too clear on which side of the debate we belong).

However, it is not until the final 15 minutes of the play that the safe, hollow, untenably articulate bickering lands the two in more interesting territory with a twist that reveals just how problematic their relationship to Section 28 really is. Jennings and Duncan do well to perform the emotional U-turn required to carry them from barbed repartee to raw emotional transparency, but as we care so little for them before that point it is hard to see them as more than devices, first for comedy and then for drama.

Maybe Woods was aiming to write a drawing room comedy with a twist, designed to draw links between politicians then and now who promote bills for their leaders rather than pursuing issues which reflect their own beliefs or those of their constituents. Maybe it is a piece of political history about Section 28, presented through the eyes of those advocating it. Either way, with real-time politics proving so theatrical, Woods’ play struggles to make itself heard over the ayes and the nays drifting across the river from Westminster.