The last time that Charlton Athletic won six matches in a row they went on to power to the League One title.

You can say that puts pressure on this current crop of Addicks to follow in the footsteps of Chris Powell’s team, who proved a cut above the opposition as they finished on 101 points in the 2011-12 campaign – eight clear of runners up Sheffield Wednesday.

But there is pressure and there is expectation when Charlton are at this level. They should be in the mix, especially with Thomas Sandgaard finally bringing stability at boardroom level.

The difficulty now is that the Addicks have set the bar high at a point of the season when manager Lee Bowyer expected them to still be finding their feet. 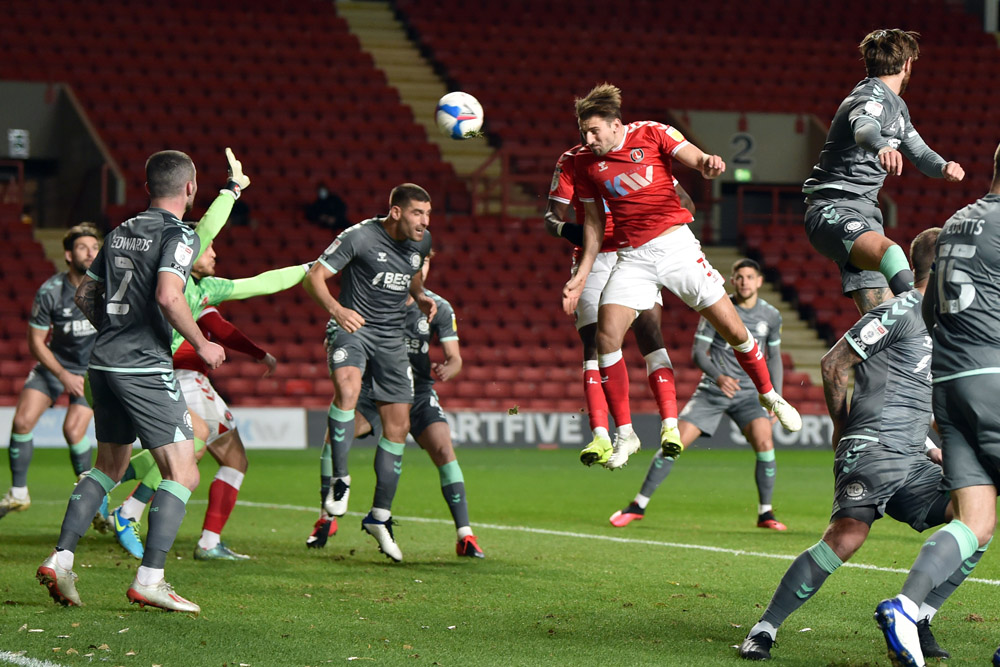 The Charlton boss thought they would be playing catch up on their promotion rivals, making the valid claim that the late lifting of the EFL transfer embargo would mean the raft of new additions would take time to get fit and to gel as a unit.

But instead Tuesday night’s 3-2 victory over a decent Fleetwood made it six wins on the spin in the space of just 18 days. It moved the South Londoners to third in the table – three points behind leaders Peterborough and with a fixture in hand.

The club’s most successive league wins is 12 – set under Alan Curbishley in a relentless romp to the Championship title in 2000.

But even half that number is very impressive when you consider the compacted nature of the schedule and the fact there have been such wholesale changes to the playing personnel. 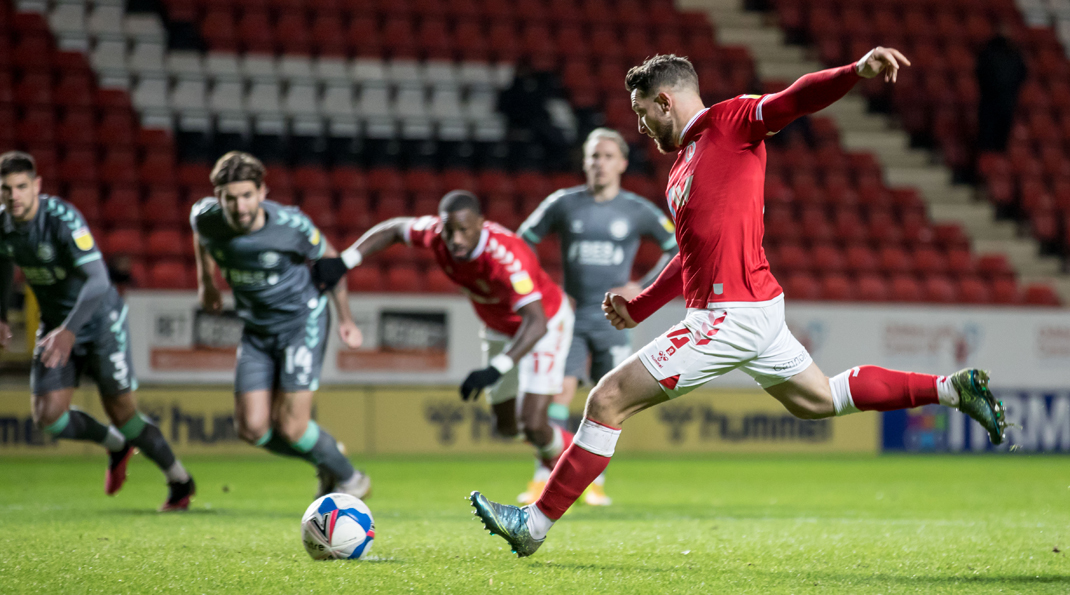 That Curbishley team mentioned above only had a spot of tinkering done to it following Premier League relegation – adding quality at both ends of the pitch in goalkeeper Dean Kiely and striker Andy Hunt. They also only sold one of their prize assets in Danny Mills.

Bowyer and director of football Steve Gallen had to perform a major facelift on the squad and lost key men like Lyle Taylor, Josh Cullen and Dillon Phillips. The early signs are that they have done a sterling job – adding experience and quality with the likes of Ben Watson, Chris Gunter, Andrew Shinnie and Conor Washington. 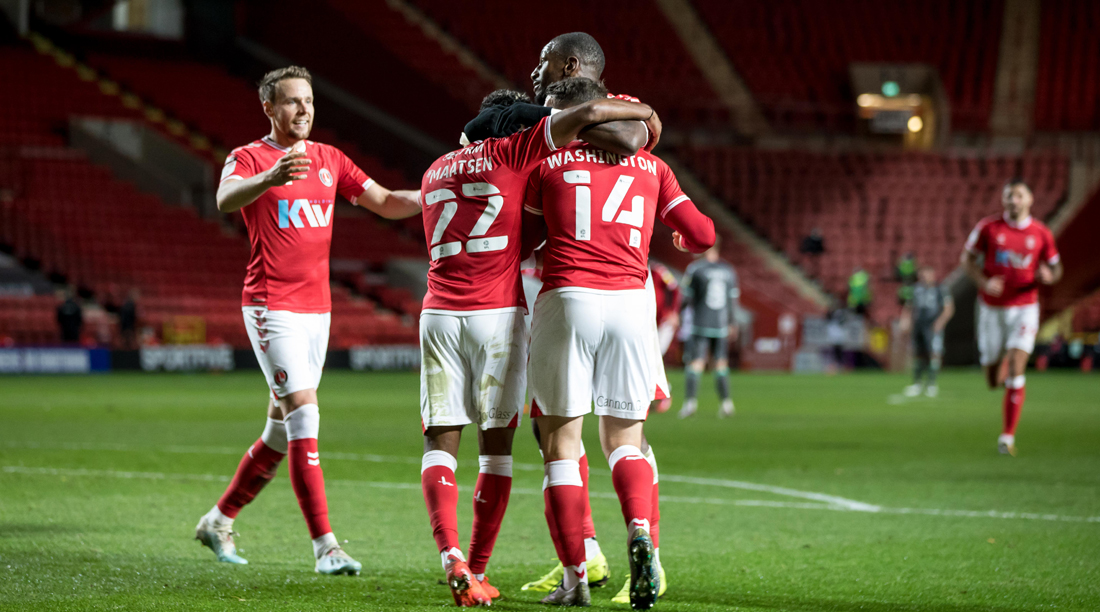 Let’s also not forget that Marcus Maddison – a proven talent in England’s third tier – has seen injuries curtail him to just six minutes of competitive football. Alfie Doughty, such a superb attacking outlet, is out for four months. Alex Gilbey will almost be like a new signing.

Bowyer is aiming for a second promotion from League One and they have four points more on the board after 10 matches than they did in 2018-19.

“We’re way ahead of where I thought we would be,” admitted the Charlton chief on Tuesday night. 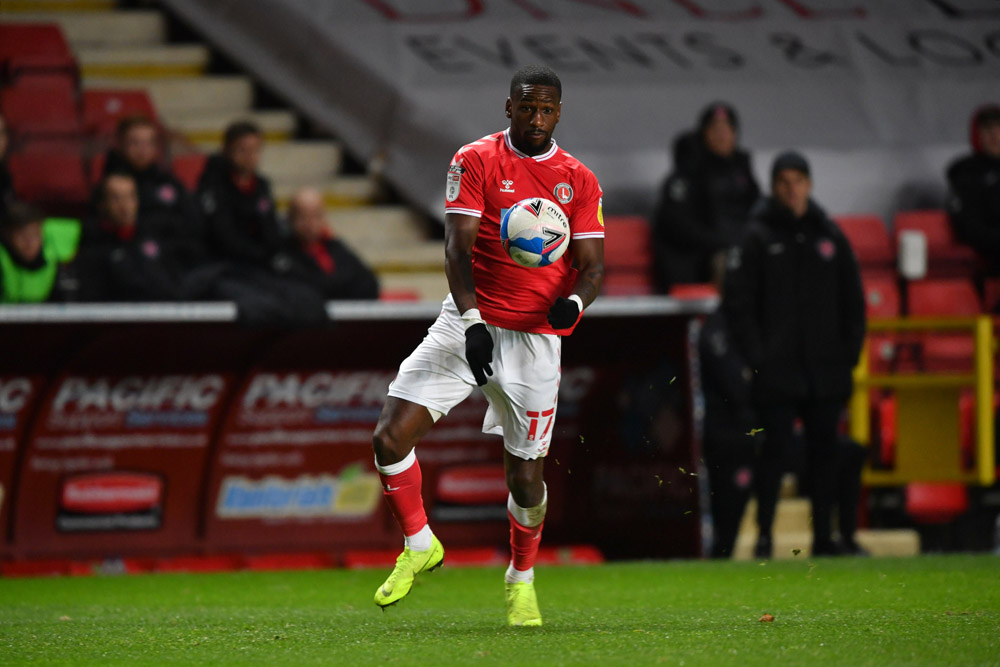 “If you remember two years ago, it was really the back end of the season that we really got going.

“Most games we’ve had nine or 10 players, who didn’t even play for us last year, starting. It takes time. What we have done is we’ve recruited people that are winners.”

Charlton also have more than one way to win a football match.

On their current seven-match undefeated run they have had more possession in four of them, but significantly less in their three most recent successes.

But it’s nothing new that it is what you do with the ball that counts. 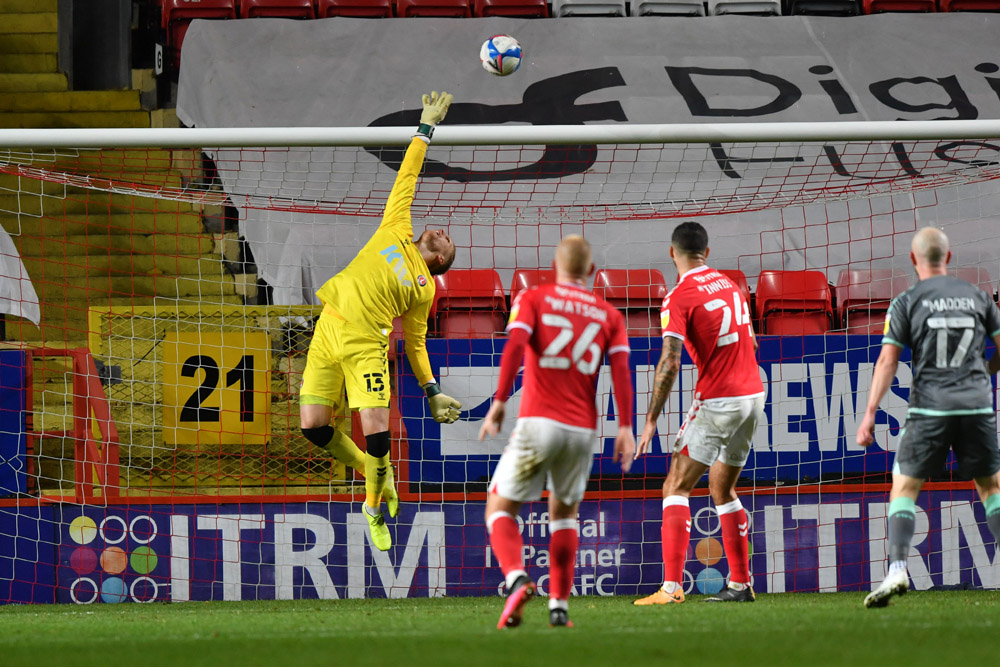 Charlton’s possession against Fleetwood was a seasonal low of 34 per cent, with Joey Barton’s men
completing more than double the passes of the hosts.

But it didn’t prevent the Addicks from having 17 shots – 10 more than the visitors. They were happy to reel the Cod Army into their half and then rely on cutting and quick counters. Barton’s boys took the bait.

The Addicks had a dream start as Shinnie’s quality corner was headed in at close range by Ben Purrington. 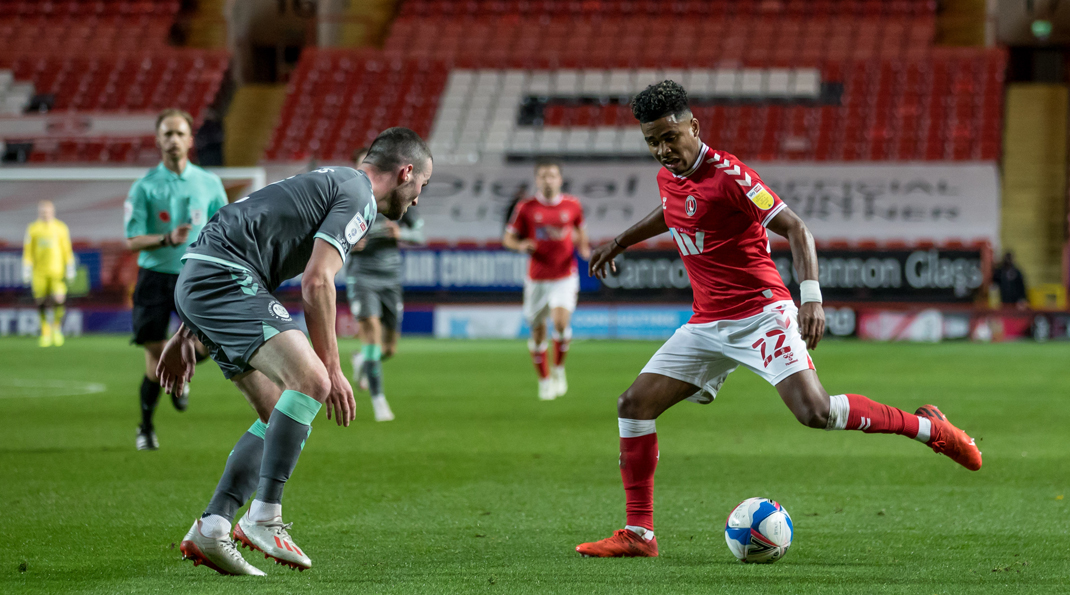 And there was a promise of a comfortable evening when Jayson Leutwiler could only invitingly parry Omar Bogle’s shot into the path of the lurking Washington.

But Fleetwood had the quality of Ched Evans to thank for quickly dragging them level. The former Manchester City man showed a quality first touch and composure to flash an effort past Ben Amos and end the Addicks’ run of more than nine hours without conceding.

It felt like there were plenty more goals left in what was an entertaining contest. But instead there was just to be one. 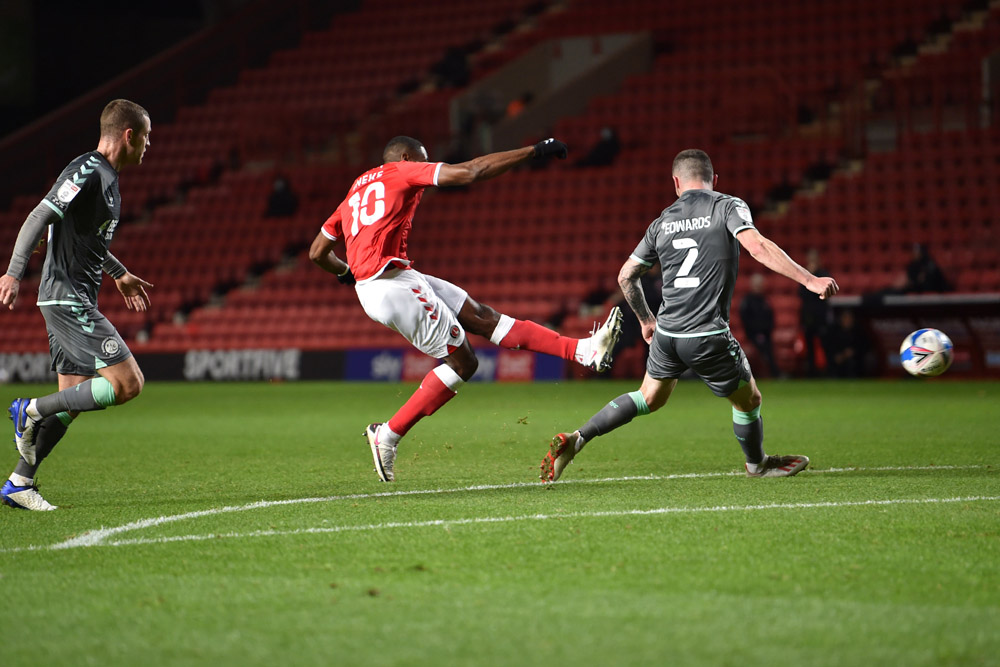 Albie Morgan’s one-two with Washington put him into the right side of the Fleetwood penalty area and Danny Andrews impeded the youngster. Washington stepped up to do the business from the spot.

Charlton had opportunities to restore a two-goal cushion.

Tom Edwards’ poor back pass put Bogle in on goal but Leutwiler did well to narrow the angle.

And Chuks Aneke, a typical handful after making a late introduction, hit the left post.

Bowyer switched to a five-man defence in the closing stages with the only scare being an Evans header which Amos tipped over his crossbar. 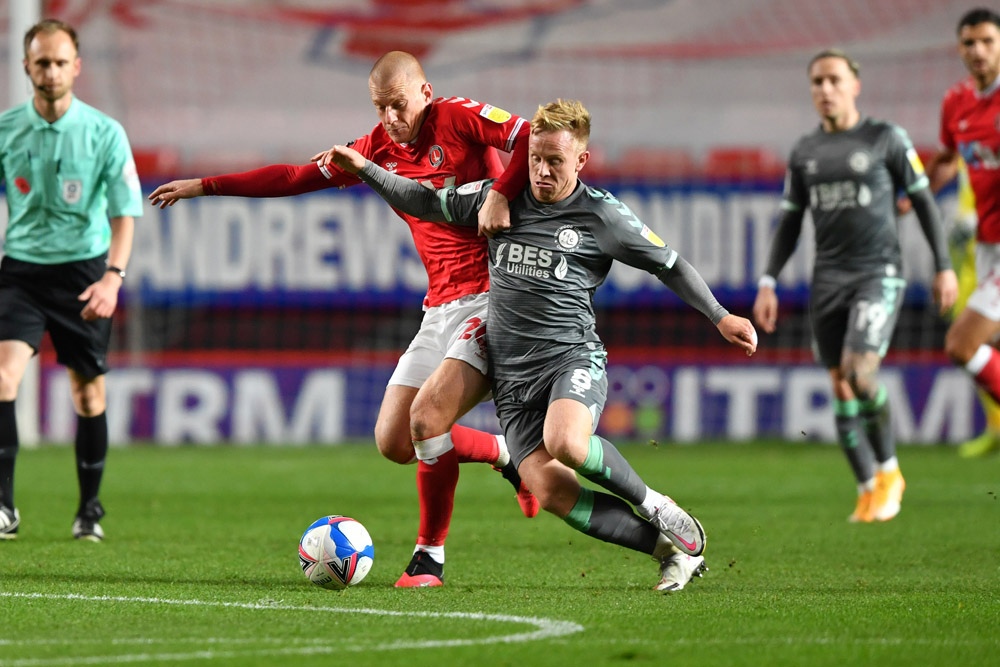 Tomorrow’s FA Cup tie at home to Plymouth – and Tuesday’s EFL Trophy match against Leyton Orient – is a chance to rest key men.

BEST MOMENT
Albie Morgan’s movement which led to Charlton winning that crucial second-half penalty. It capped off a fluid and incisive piece of play.