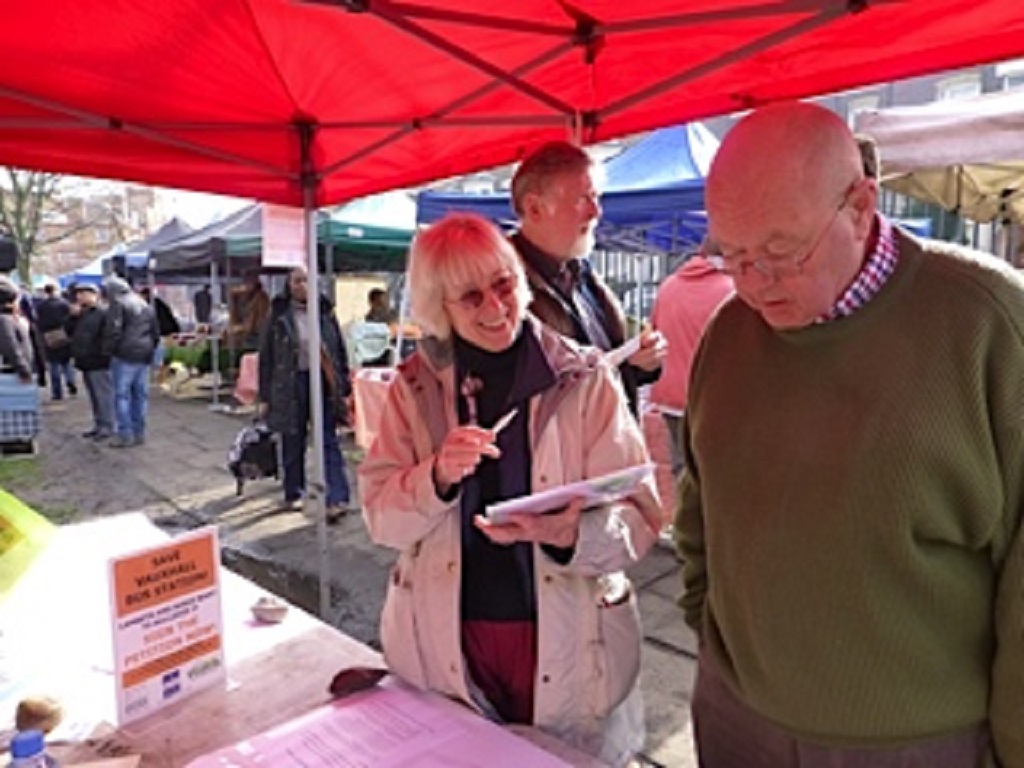 Residents have demanded the Government prevent plans to build a 53-storey tower block.

Community groups in Vauxhall want Secretary of State for Communities and local Government Sajid Javid to “call in” the multi-million pound revamp of Vauxhall Cross.

Transport for London want to demolish the 13-year-old bus station yards from Vauxhall Bridge and allow Zaha Hadid Architects and owners VCI to build two tower blocks on the site – one 53 floors high and one 42 floors.

A new Vauxhall bus station would then be constructed on the ground floor and a new public space between the towers and Vauxhall railway station.

They are also furious Transport for London (TfL) will not do an environmental impact assessment even though residential roads and three primary schools will be affected.

Residents Helen Irwin and Pauline Gaunt said: “This is unforgiveable in one of London’s most notorious pollution black spots.

The pair have written to Mr Javid on behalf of the Vauxhall Society, residents and the Save Vauxhall Bus Station campaign, to plead with him to have the scheme and its impact considered as a whole.

“These schemes are inextricably interdependent, but TfL have manipulated the planning rules to isolate the elements of the plans, so preventing any consideration of their overall effect on transport issues or the wider needs and health of the population,” they said.

“TfL has rejected, without modelling it, a well-researched scheme by traffic experts and local residents for a less polluted and more efficient two way scheme, which would not require demolition.

“Freedom Pass Holders were excluded, plus child bus pass holders and anyone who didn’t travel through Vauxhall on a daily basis – including the hundreds of people who disembark at Vauxhall on route to St Thomas’ Hospital.

They add: “Lambeth/TfL have come up with the current £50million plans for a much reduced and inferior bus station with reduced weather cover, still situated within a gyratory, but a two-way one, no significant reduction in pollution levels, increased crossing times for pedestrians at the most polluted points, and bus stops being moved from the safety of the current bus station to roadside positions adjacent to the proposed island site development, which do not comply with Government guidelines on antiterrorism measures.

“The full impact of this scheme will be felt from Marble Arch to Camberwell, Wandsworth to the Elephant and Castle. Any failure within any of its component parts quickly reverberates out across central London with disastrous consequences.

A TfL spokeswoman said: “We are working closely with Lambeth council to reintroduce the safer two way road system in place of the one way system at Vauxhall, which was supported in public consultation. “The current bus station was created for the one-way road system so needs to be completely redesigned to allow buses to operate.

A Lambeth Council spokesman said: “The schemes are on different sites in different ownership and being developed by different developers.

“As they are neighbouring sites they do have a relationship however there is no requirement that both developers submit under a single application.

“Considering two planning applications on adjacent sites is a common occurrence under the planning system. Each development needs to be acceptable on its own merits and assessing the relationship of a development with neighbouring sites, both as they are now and how they might be developed in the future is a fundamental and routine consideration for planning officers.

“Submitting two separate applications does not prevent a consideration of cumulative impacts.

“Officers are aware of the land swap required to enable the developments but this not a material consideration and does not affect the planning merit of either scheme.”

‘An improved pedestrian environment’ The office blocks and hotel on Vauxhall Cross Island – designed by Zaha Hadid Architects, creators of the London Aquatics Centre and the maths centre at the Science Museum – will be connected by a podium which is itself 10 storeys high.

They estimate that 1,450 office jobs would be created, up to 500 hotel jobs and 50 jobs from retail and building management.

The project is being managed by Great Marlborough Estates (GME), which said its plans would provide “improved pedestrian environment and experience; helping to create a safer and more legible streetscape, accommodating the increasing pedestrian activity between Vauxhall railway station and Nine Elms”.