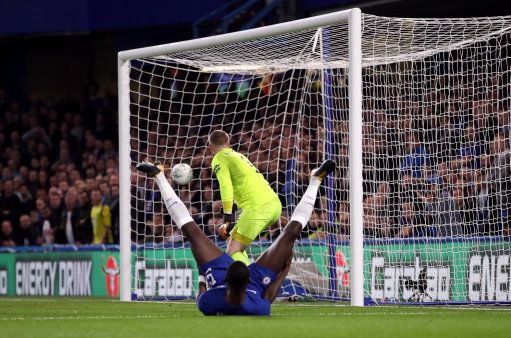 Antonio Rudiger headed Chelsea into the fifth round of the Carabao Cup with a wonderful header against Everton tonight at Stamford Bridge.
A second, from William deep into added time simply rubbed salt in to the wounds of the Merseyside opponents, who saw substitute Dominic Calvert-Lewin tuck home a late consolation to make it 2-1.
The 24-year-old German defender, a £29million signing from Italian giants Roma in the summer rose unchallenged on 26 minutes to loop the ball from the far post into the back of the Everton net.
It was probably the only piece of class on the field during the 90 minutes, much of which saw Chelsea concede possession to their goal-shy opponents.

Danny Drinkwater made his Chelsea debut tonight following his £35million, deadline day move from Leicester City.
His first touches, it has to be said, were poor.
Neither side made an effort on goal, worthy of the name, with centre-back Antonio Rudiger, flashing a 25-yarder into row z of the Shed End.
However Chelsea increased the pressure and won a corner on 26 minutes. It was taken short by Willian to youngster Charly Musonda, who clipped over what looked like a cross too far, but Rudiger somehow jumped up at the far post, and lobbed the perfect header back across goal and into Jordan Pickford’s far post to put the Blues 1-0 up.
Michy Batshuayi had half a chance, which he created himself, on 36 minutes, twisting and turning on the edge of the Everton penalty area, before getting a left footed drive, which to his credit Pickford snaffled easily.
There were no changes from either side at half-time.

Everton had their first effort on goal on 56 minutes when a Kevin Mirallas clip fed in-running Wayne Rooney. The ex-England man did well to get a left-footed volley goal-bound but Chelsea stand-in goalkeeper Willy Caballero mange to make himself big and saw the ball deflect off his chest for a corner.
Seconds later Aaron Lennon saw a half-volley from closer range inch over the Chelsea crossbar.

Head Coach Antonio Conte, clearly unhappy at the loss of momentum and possession, turned to his bench, on 62 minutes and brought on Cesc Fabregas – he replaced Drinkwater, who was clearly showing signs of fatigue.
Caballero produced a fine double save in the space of a minute, firstly denying Phil Jagielka’s glancing header and then a thumper from Mirallas.
Conte, still unhappy at the way the game was going replaced Musonda with Pedro with 20 minutes left on the clock.
Batshuayi thought he had notched up number two as he prodded the ball past Pickford, but Jagielka did well to cut the ball clear of goal at the last moment.
With 10 minutes left – ex-Charlton winger Ademola Lookman crashed a sweet, curling left-footer, from the apex of the Chelsea penalty area, that clipped the Chelsea crossbar.
Conte’s final attempt to wrest control of the game saw Batshuayi replaced with six minutes left, Alvaro Morata entered the fray in his place.
Right on the whistle Willian slotted home to make it 2-0 before substitute Dominic Calvert-Lewis tucked home a late meaningless consolation.