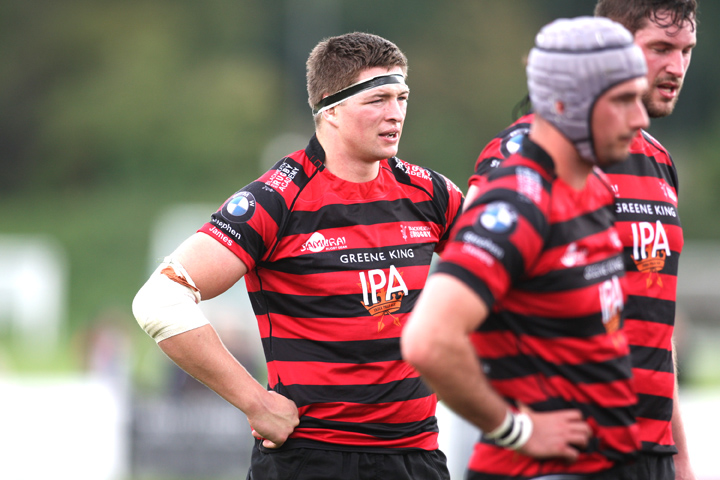 Blackheath were dealt a reality-check as they lost 28-19 to Esher in National League One, by Graham Cox.

Club had climbed to second in the table but turned in their worst performance since James Shanahan took charge in the summer.

Esher were on a run of five successive defeats but Blackheath were in benevolent mood and offered up a significant head start in the contest at Molesey Road.

First an attack down the left flank shrugged off tacklers for inside ball to send full-back Lloyd Davies over. Moments later a kick from defence was run back through a misaligned defence for wing Ben Loader to cross as Surrey took a 14-0 lead in as many minutes.

Slowly Blackheath hauled themselves into the match, largely thanks to the tireless efforts of Harry Bate.

The open-side was instrumental in all three of the Club’s scores as he made the hard yards to take the visitors close enough for Josh Davies to dive across on 20 minutes, and then again under the posts off line-out ball before Mike Mvelase squirmed around defenders to send Tom Chapman over out wide.

Joe Tarrant added both conversions, the second an excellent strike from the left touchline, but opposite fly-half Paul Roberts had already landed a penalty on the half-hour, as Blackheath went off their feet at the breakdown, for a 17-14 interval lead.

The second period was punctuated by a total of 16 penalties and although Esher conceded the majority with nine – two of them resulting in yellow cards for no arms tackles – it was the ones against Blackheath that held the greater significance, most notably within three minutes of the restart as two infringements enabled the Esher pack to drive towards the goal-line and wing Tom James to dive over for a third score.

Despite holding the territorial, and numerical, advantage the composure and control of recent weeks deserted Blackheath, with frequent handling errors and poor decision-making.

The visitors put together enough phases to send Markus Burcham across out wide on the right flank, Bate making the final pass, on the hour mark.

Esher were determined not to let the match slip and their pack stepped up their game following their second yellow card.

The kick-off has been brought forward to 2pm to accommodate the first Test between England Deaf Rugby and New Zealand Deaf Rugby, which starts at the same venue at 5pm.