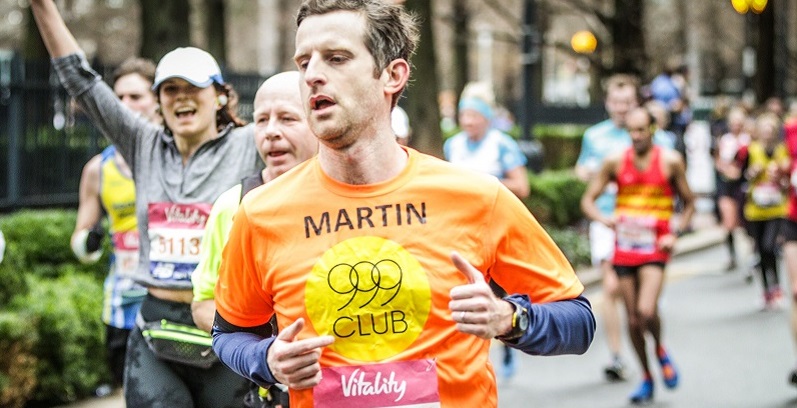 A team of four runners battled the elements in a half-marathon to raise around £1,500 for a homeless charity.

Dave Collis, Martin Wayman, Rosamund Cox and Emily Grenville-Grey all fundraised for the 999 Club when they took part in the Big Half event through central London earlier this month.

For Dave, head of field operations at hardware retailer Robert Dyas, this was his first half-marathon.

He was introduced to the 999 Club after visiting the charity’s day centre and night shelter as part of his company’s fundraising support.

Dave, who has lived in Greenwich most of his adult life, said: “I wanted to try something that would stretch me and given that I was inspired by the work done by all the volunteers it made sense that I try to raise some money at the same time.

“The sense of community just on the journey to Tower Bridge was amazing and it was incredible just to be at the start line.

“The run through the tunnel was absolutely amazing, runners were shouting and cheering and the echo really lifted spirits.

“I saw my family as I came through Canary Wharf and just after I passed them I felt very emotional, not only from seeing them but I became acutely aware of all the cheering strangers.”

Dave also had some tips for would-be runners for future events.

He said: “It’s not easy – the Sunday morning training runs were sometimes tough, sometimes lonely, but also sometimes exhilarating and ultimately all forgotten when you get on the course and get caught up and pushed along by all of the strangers giving you encouragement.

All I did was run for a bit, the people who volunteer every day are the ones who make a real difference to people’s lives, so even if running isn’t your thing there are other ways to support.”

Martin said: “I wanted to support the 999 Club because my wife and I previously volunteered at its night shelter in the winter of 2017/18, giving people food and clothing.

It really struck me as a very well-run charity which does important work for a problem that is getting worse.

“I like the ethos of the place – getting people back on their feet, helping men and women who want to be helped.

It’s a brilliant organisation.” Talking of his experiences of the Big Half day, Martin added: “It was great – really enjoyable.

The wind was tough at some points, especially crossing Tower Bridge, but there was a lot of encouragement along the way.

“The course is flat, and goes through great landmarks, so I would definitely do it again. It’s a good event to try to get a better time, for someone who is a keen runner.”

To help meet fundraising targets, Martin recommended including on online fundraising pages some examples of how the money people donate can make a difference.

Following up with friends and family even after the event can all help to reach the fundraising target. You need to be patient, but also some people need a bit of nudging,” he added.

For more information about how you can help with 999 Club, go to www.999club.org or email fundraising@999club.org.