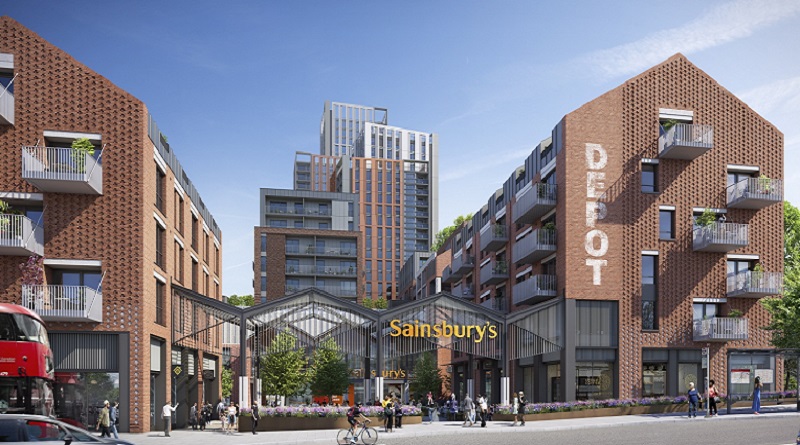 One of the country’s biggest supermarket chains wants to build 1,500 new homes on a site which Tube bosses say is vital for extending the Bakerloo line.

Sainsbury’s plans to build high-rise housing on the plot in New Cross Gate, where it has a store, but Transport for London (TfL) wants to build a new Tube station there.

Sainsbury’s and its agent Mount Anvil submitted a development application to Lewisham council to build 1,500 homes up to 33 storeys in height.

The application has not yet been made public by the council.

But TfL insists the Bakerloo line extension’s best option is through Lewisham via the Old Kent Road and New Cross Gate, through the site.

Chris Porter, Transport Planning Manager at TfL, said: “There has been no change in our preferred option for the proposed new Bakerloo line station, which remains the Sainsbury’s car park at New Cross Gate.

“We have also identified this site as our proposed primary work site that is required to enable us to build the extension.

A public consultation is currently under way on our latest proposals for the Bakerloo line extension and we will continue to engage with all relevant stakeholders in relation to these.”

It would see the Sainsbury’s store close and become a primary building site for the extension, which aims to improve connections and stop overcrowding on the underground.

Sainsbury’s insisted its tower block proposal would not disrupt TfL’s Bakerloo line extension, and says it plans to work with TfL to find a solution.

On behalf of Sainsbury’s, a Lowick Group spokesman said: “Mount Anvil, A2Dominion and Sainsbury’s proposal will deliver more homes in the New Cross Gate area and will help to support local amenities such as education and health funding.

“We are also committed to preserving local conservation areas and creating more green spaces for people to enjoy. We will continue to work closely with the council and the local community, and welcome further feedback.”

But residents and campaigners expressed concerns the height of the buildings could force TfL to alter their plans.

Conservation areas Telegraph Hill and Hatcham Park would be affected by Sainsbury’s proposals.

Lewisham council could seize the plot by issuing a compulsory purchase order, if its planners believe the site is essential for development and not being otherwise used for vital measures.

But if planners did try that move, Sainsbury’s could launch an appeal to Robert Jenrick, the government minister for housing and local government, if the firm’s scheme is rejected in favour of the Bakerloo
construction site.

TfL wants to extend the Bakerloo line from Elephant and Castle to Lewisham and create a new station at
New Cross Gate to improve connections.

TfL has already hosted 11 public exhibitions for people to share their views.

The plans have changed after each meeting to cater to residents’ needs.

TfL is also considering a second extension phase of the Bakerloo line beyond Lewisham to Hayes and Beckenham Junction.

This would involve converting the National Rail line via Catford to Hayes to a London Underground operation.
It still want residents’ views on further extensions, the route of the proposed tunnels, the location of work sites and the naming of two proposed stations in the Old Kent Road.

The consultation can be seen by visiting tfl.gov.uk/bakerloo-extension and will be active until December 22. Residents are outraged at Sainsbury’s plans to build 1,500 homes on the site.

Sainsbury’s has insisted that its proposal will not disrupt TfL’s Bakerloo extension, but residents remain concerned the height of the buildings will alter the extension’s plans.

The firm’s development will sit between two conservation areas of small properties built by the Haberdashers’ Company in Victorian times – Telegraph Hill and Hatcham Park.

Hatcham Park resident Emily Finch, 28, said: “Sainsbury’s are treating local residents with utter contempt. I had to help a woman off the Overground this morning at New Cross Gate after she fainted from the overcrowding during rush hour.

“She said she could hardly breathe because the train was so busy. It’s clear we need a Bakerloo line extension in the area to help take the load off the existing transport infrastructure which is not able to cope with the increasing number of residents.

“Through various meetings with TfL we have now heard that the Sainsbury’s development will essentially block the Bakerloo line extension into the area.

They simply cannot build the line if a high-rise development of 1,500 flats is built there.

“How can a private company stand in the way of a much-needed infrastructure project which will improve the lives of everyone in South London? It’s outrageous and shows how little Sainsbury’s truly cares about the local community where their shops are located.”

Sainsbury’s said it will provide money for doctors surgeries, green spaces and other facilities, but residents feel this pushes responsibility back to the council and the NHS.

The Telegraph Hill Society and Hatcham Park residents have come together in a joint opposition group, NewXGateActionGroup.

They have already gathered objections from around 300 residents in a local survey.

In response to the survey, one resident said: “Sainsbury’s are putting potential profit for their shareholders above the need of the local community.”

Sainsbury’s released its own consultation where it asked residents if they supported the mixed-use development and public realm improvements, including new open spaces.

The consultation took place in-store and found that 72 per cent of respondents supported a mixed-use development and 66 per cent of people supported 1,500 new homes being built, including 35 per cent affordable homes.

One resident said: “The site desperately needs investment. Real affordability should be delivered in this pricey high pressure environment. Some community space and cheap options for start-up businesses.”

One respondent opposing the plans said: “We would like to see genuinely affordable houses, not only houses at 80 per cent of market value. This doesn’t mirror the actual average income of people, and people in Lewisham.”

Telegraph Hill Society chairman Malcolm Bacchus feels Sainsbury’s consultations did not ask residents about their most pressing concerns – overshadowing, lack of parking, transport and the history of the area being ignored.

He said: “While we will not be releasing our survey results until we respond to the planning application, and while I accept that most people who respond to a self-selected survey are likely to be those who object, I can safely say that the results of our survey to date do not reflect the answers that Sainsbury’s got.”

The Telegraph Hill Society asked residents if they felt the amount of green space put forward by Sainsbury’s was acceptable, and if they supported the high-rise buildings with limited parking.

Mr Bacchus said: “The demand is for family homes which the council says are in short supply in the borough, but the development of small flats in high towers without car parking are – as Sainsbury’s have admitted – more suited for those without families.”

Residents intend to increase their campaigning against the development when Sainsbury’s application is made public by the council.

Mr Bacchus said he was surprised how few people heard about Sainsbury’s proposals, despite mass campaigning.

He said: “We have had a number of discussions with Sainsbury’s over the development of their proposals and they have shown little interest in our concerns – in fact, each time they have come back with new proposals the height of the tower blocks has been increased.

“Developers are ignoring – and wrecking – existing communities in their haste to capitalise in
on the undoubted need for new housing.”

Details about the Telegraph Hill Society’s campaigns can be viewed on its website, https://newxgateactiongroup.org/