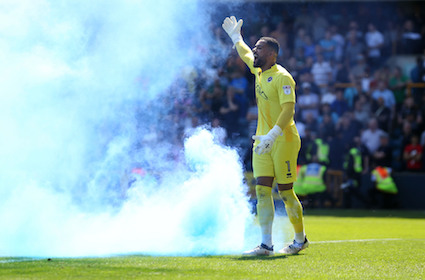 Scotland boss Alex McLeish reckons no blame can be attached to Jordan Archer for the second goal the Millwall goalkeeper conceded on his international debut.

The Lions stopper started for the Tartan Army in Lima on Tuesday night with the hosts running out 2-0 winners.

Archer raced from his line but did not manage to clear the ball in the build-up to Scott McKenna being penalised for handball. Christian Cueva converted from the penalty spot.

Jefferson Farfan got the second soon after the restart with a close-range shot which the Millwall stopper got a hand to but could not prevent crossing the line.

McLeish said: “Our goalkeeper felt that maybe he could have stayed [on his line] at the first goal.

“But I wouldn’t blame him for the second goal, because it was a shot from point-blank range from Farfan, very close to the goal and maybe our defenders could have done better.

“We believe the first goal was a big setback.

“We do have a lot of new players, a lot of players coming from the Scottish league which has not been recognised as a good league but I was very proud of them”.