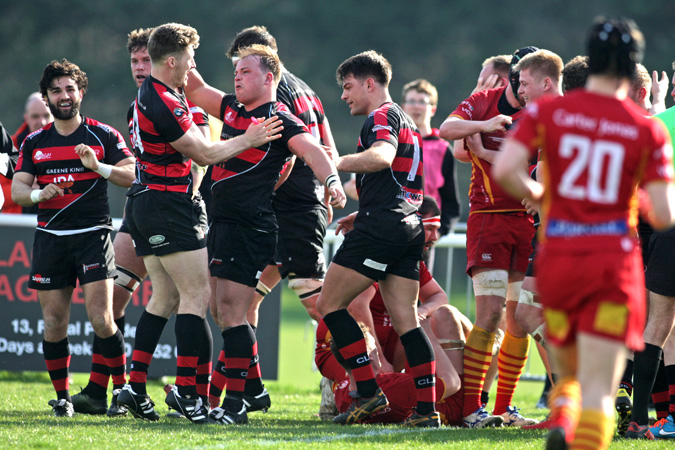 By Graham Cox at Well Hall

After 127 consecutive appearances in the number 13 jersey, the sight of Markus Burcham marking his 150th outing in Club colours wearing seven and packing down at open-side must have seemed a little odd to many.

Such was the selection headache handed to James Shanahan during the build-up to this match that, thanks to injury and absenteeism, at one stage the Club’s head coach was joining his skipper in the back-row.

That eventuality didn’t come to pass, and despite the walking wounded, and players hauled in at short notice, some fine performances ensured Blackheath scored 23 unanswered points to capture all five league points.

Not, however, before they’d handed their visitors a significant head start. As Blackheath consistently fell foul of Italian referee Andrea Piardi during the opening quarter, Cambridge fly-half Ben Penfold, shrugging aside the strong cross-wind, landed four well-struck penalties to put his side 12-0 ahead.

However, with tightened discipline, and a scrum steadied by Hayden King and Danny Herriott, and driven forward by an engine room consisting of Neale Patrick and, in only his second match after a long lay-off, Devin Montgomery, Blackheath began to put phases together.

Half-backs Josh Davies and Joe Tarrant kept the Club going forward, but star billing fell to Harry Fry, whose line-out work and barnstorming breaks in the loose did as much as anyone in breaking down an organised Cambridge defence.

Burcham was first to cross, the Club skipper touching down out wide after Tarrant’s floated pass and good work from Mike Mvelase, back from his loan period at Sidcup.

Cambridge lost wing Oli Petrides to the sin-bin for handling on the ground, and as Harry Bate drove just short, Mark Cooke’s long miss-pass found Alex Pickersgill in space, the wing going over to leave Blackheath just two points in arrears at the break.

Fry was adjudged short on 50 minutes, but the five-metre scrum saw Tarrant dummy across the goal-line to put Blackheath ahead, and although the Club fly-half missed all his conversion attempts, his 40-metre penalty close to the hour-mark extended the hosts’ advantage.

The introduction of Tom Stradwick enabled Burcham to return his more familiar role at outside-centre, and there was later the welcome sight of James Catt making his first appearance since October 2015, as Blackheath made full use of the bench.

The sun also made a late entrance, and with the Club’s set-piece still firmly in control, the last word fittingly fell to the outstanding Harry Fry, the hooker driven across for the bonus score in the final play of the match.

Blackheath travel to Paton Field on the Wirral on Saturday as they make a first league visit to Caldy but return to Well Hall the following week for their final home match of the season against local rivals Old Elthamian.