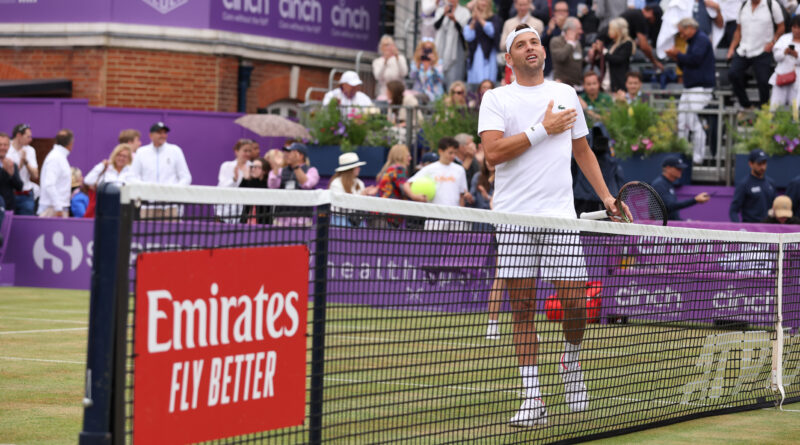 The unseeded Serb Filip Krajinovic – who admits he has never liked playing on grass before – defied all expectations to secure a place in this year’s Cinch Championship final at Queen’s.

He was only reached four ATP finals before – losing them all – and at the age of 30, the world number 48 was not largely fancied against two-times winner Marin Cilic in Saturday’s second semi-final.

But he raised his game impressively to see off the 33-year-old Croat 6-3, 6-3 in just one hour 19 minutes as his normally dominant opponent simply failed to get into gear.

Much of Cilic’s woes were down to a hugely impressive showing from Krajinovic, but it was a case of chalk and cheese for the beaten man.

He was bad in the chilly, rainy, 16 degrees of centre court as he had been in the 32 degrees of the day before when he thoroughly outplayed the Finn Emil Ruusuvouri in the quarter-finals.

The level of first serves was painfully low and the double faults mounted up, as the groundstrokes kept missing the tramlines.

It was a baffling mood change and one which the shivering spectators – most dressed for the much hotter weather which started the day – could scarcely believe.

Krajinovic has yet to win an ATP title and hit a career high ranking of 26 four years ago, and has had to recover from shoulder and wrist surgery down the years. In short, he has not been a major player.

But tomorrow, he will return to centre court for his day in the sun. Or rain, given the vagaries of the week’s climate.

“It is an unbelievable feeling. I can’t believe I am in the final,” Krajinovic said after his win. “It is a dream come true. The tradition of this tournament is amazing and I have watched so many finals.

“To be honest, I don’t like to play on grass. Every year I come to Wimbledon and lose in the first round, but now I start to like it!”

Tomorrow (Sunday) he will meet reigning champion Matteo Berrettini, who had no trouble in seeing off the semi-finals’ other unseeded player, Botic Van de Zandschulp of the Netherlands, 6-4, 6-3.

Not even a rain break could disrupt the Italian’s rhythm as he stormed to victory in a much more routine clash, although the battling Dutchman offered enough resistance to make the match last 90 minutes.

Berrettini is fast becoming a favourite of this west London crowd. Perhaps the fact he is single – a fact touched upon in his press conference – has only added to the attraction for one half of the crowd in particular.

“Berrettini is an unbelievable player, but let’s see,” Krajinovic said. “I am happy to lose, honestly. I will of course give it my best.”