Shane Ferguson had two trips to Wembley during his career at Millwall, but it is the far less glitzy surroundings of the Memorial Stadium which holds a special place in his memory.

The Lions looked set for a third successive campaign in League One before late final day drama at Bristol Rovers on April 30, 2017.

Ferguson’s inswinging corner was guided home by the bandaged head of Shaun Hutchinson in the 85th minute.

Millwall had been 2-0 and 3-1 ahead but needed the defender, numberless after spilling blood for the Millwall cause, to make it 4-3 and send the 1,200 travelling fans into ecstasy.

The South Londoners snatched the final play-off spot as they finished a point ahead of Southend, who had won 1-0 at home to Bury.

“I remember Lenny [Ryan Leonard] saying Southend were pretty much on the pitch celebrating before our game had finished – they thought they had done it,” said Ferguson, who is leaving the Lions this summer.

“That game was stressful. One minute we were comfortable – cruising – and the next minute we weren’t. There were just so many emotions.

“All I was saying to myself before I took the corner was ‘don’t hit the first man’.When Hutch put the ball in the net I just fell to the floor. Instead of going over to celebrate with Hutchy, I was thinking ‘did this really happen?’ It was one of those moments.

“It was a massive three points for the club at that stage. Once we knew we had got in the play-offs we felt we could go on and get promoted.”

Millwall drew 0-0 with Scunthorpe at The Den before the potent front pairing of Steve Morison and Lee Gregory made the difference at Glanford Park. Morison was on target twice with Gregory also on the scoresheet in a 3-2 victory. 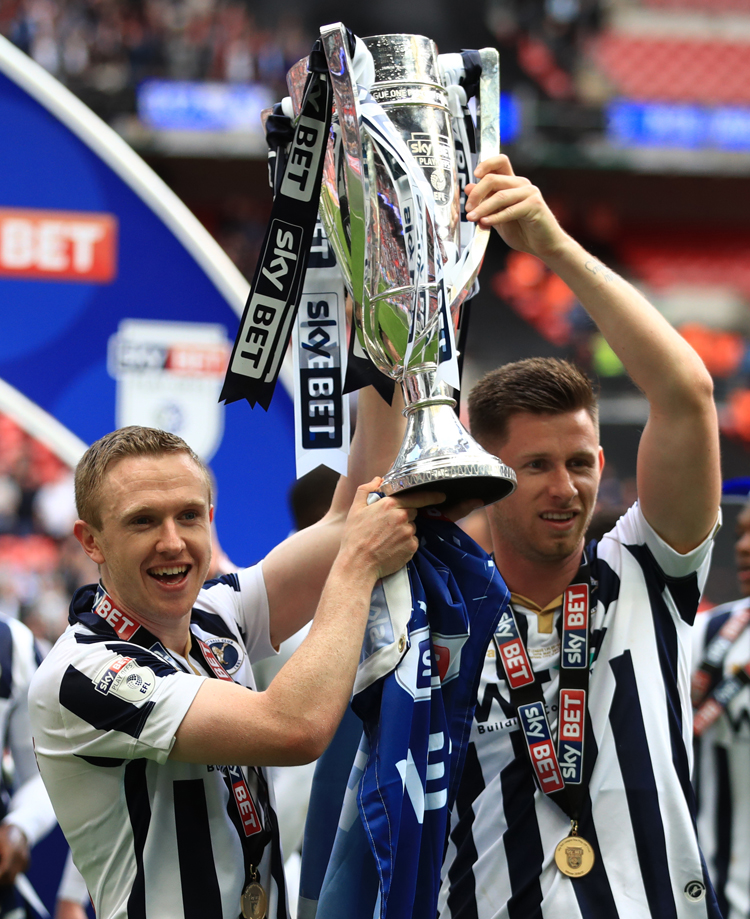 Morison, so often the man for the big moments in his Millwall career, then got the late winner in the final against Bradford.

It made up for the devastation of losing 3-1 to Barnsley at the national stadium in May 2016.

“The squad didn’t change a massive amount from the final and the team from the year before,” said Ferguson. “We had a lot of chats in the pre-season and we felt like we could go again.

“The manager [Neil Harris] saw that confidence in us that we could kick on. We did have dips in that season but in those moments you had the big characters like Moro and Gregs – who played really well together – Webby [Byron Webster] and TC [Tony Craig] who kept the squad together in those times.

“We had a lot of experience and a really strong squad for League One, especially.”

Ferguson made 217 appearances for Millwall. He initially joined on loan from Newcastle in August 2015.

“I got a phone call and was chatting to the manager at the time. He said: ‘Just come down, have a look at the club – you don’t need to be signing anything’. This was literally a day before we played Shrewsbury on the opening day in League One.

“He told me to take my time with the decision, but I think he knew that once he got me down I would sign in a hurry. I loved the set up and the place.

“It was a big decision at that stage to come to Millwall but it’s really paid off.

“It was really emotional leaving. I never thought I’d be here for six years. I definitely wouldn’t change that for the world.

“It just felt natural [to leave now]. I didn’t play much this season and I want to be playing. I didn’t feel I could do another season of that, it wouldn’t be good for my career at all.

“I had a good chat with the manager, we were both really honest where we were at with it. I’m looking forward to what happens next, I’ve left that to my agent. I’m away on internationals and I’m focused on that, just keeping myself fit. I’ll see what happens in the coming weeks.”

Millwall are gearing up for a fourth straight season in the Championship. Ferguson believes the future is bright.

“I was chatting to friends and saying I can only see the club going higher and higher,” he said. “The new staff coming in over the past couple of seasons, there has just been a lot of improvement in the squad. The quality of players we are signing now, it’s a really good time to be a Millwall fan.

“The hard work has been done to stay in the league, we’re comfortably now a top-half Championship team. It’s probably been the best period of my career.”