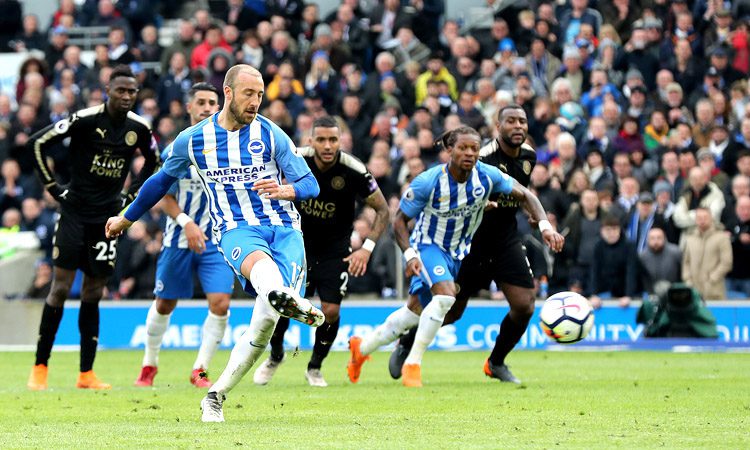 SAM SMITH gives his verdict on whether Crystal Palace were right to sell Glenn Murray ahead of the striker – a huge fans’ favourite during his four years in SE25 – heading back to Selhurst Park with Brighton & Hove Albion tomorrow.

Glenn Murray is set to make his first playing appearance at Selhurst Park since he left in 2015 – and there is a strong argument that he should still be coming out of the home dressing room rather than the away one this weekend.

The 34-year-old is leading the line for the Eagles’ despised rivals Brighton and Hove Albion – the club he departed to join the South Londoners in 2011. His 11 Premier League goals this season seem set to secure the Seagulls’ top-flight status for next season while the South Londoners still scrap for their own.

Had Murray been turning out for Roy Hodgson’s side, the respective positions of the two clubs could have been reversed.

Murray has previously only been an unused substitution for Bournemouth at Selhurst Park since his exit, and his return – and expected start – comes almost three years after Alan Pardew deemed his career at the elite level to be over.

Even then it seemed a controversial call. He came back from a half-season loan at Reading to bag seven goals and help Palace to 10th in 2014-15 – the club’s highest-ever finish since the Premier League’s inauguration in 1992.

The Eagles have failed to soar any higher since and the correlation between the quality that Palace possessed in front of goal that season, and the incremental decline since, is becoming increasingly clearer.

Admittedly, a reported £4million move to Bournemouth appeared to be a good deal for all parties at the time. Murray ceased to be part of Pardew’s long-term plans and wanted game time as he entered the latter stages of his career, while Palace had to balance their own spending having had a £30m summer spree. It was 12 months prior to the contentious sales of club captain Mile Jedinak and fellow striker Dwight Gayle, but it is Murray’s presence that is still missed the most of the trio of fans’ favourites.

He was replaced by Connor Wickham, whose Palace career has failed to kickstart due to a series of injuries. The former Sunderland striker has appeared just 34 times in three seasons and is now sidelined having suffered a setback after returning from an ACL tear.

Palace struggled for goals due to insufficient back-up options to Wickham in the aftermath of Murray’s departure. Fraizer Campbell and natural wide-man Yannick Bolasie shared the responsibility of leading the line with varying success in the 25-year-old’s absence, and January signing Emmanuel Adebayor’s solitary goal failed to make amends for the Eagles’ non-existent striking quality. Palace lacked a forward of Murray’s calibre; a typically ‘old-fashioned’ centre-forward who excelled at keeping possession and bringing others into play while also scoring goals.

The FA Cup run in 2015/16 – the campaign that followed Murray’s exit – was smokescreen to a poor season, which had begun well until a 14-game winless run was the catalyst for a rapid capitulation. The Eagles hit the net just 39 times in the Premier League – the joint-third lowest in the division.

It was not until a year after Murray left that Palace properly upgraded – Christian Benteke was signed from Liverpool for £32m and scored 15 league goals as they eventually survived relegation under Sam Allardyce following Pardew’s sacking.

But Benteke has netted just twice in 26 appearances this season and Palace have once again lacked a back-up of sufficient quality. Hodgson has often opted to use wingers Andros Townsend and Wilfried Zaha as a makeshift strike partnership which has failed to have the desired effect. January signing Alexander Sorloth managed only four appearances before being added to an ever-growing list of injured absentees. There is absolutely no debate that having Murray in the squad would have improved Palace’s fortunes this season.

Eagles chairman Steve Parish has admitted his “massive regret” at letting go the man who struck 31 goals in the 2012-13 Championship promotion-winning season.

Murray has already proved a point to the Eagles this season, scoring a late winner to knock them out of the FA Cup in January.

He would have been a useful component when goals and quality up front has been sparse.