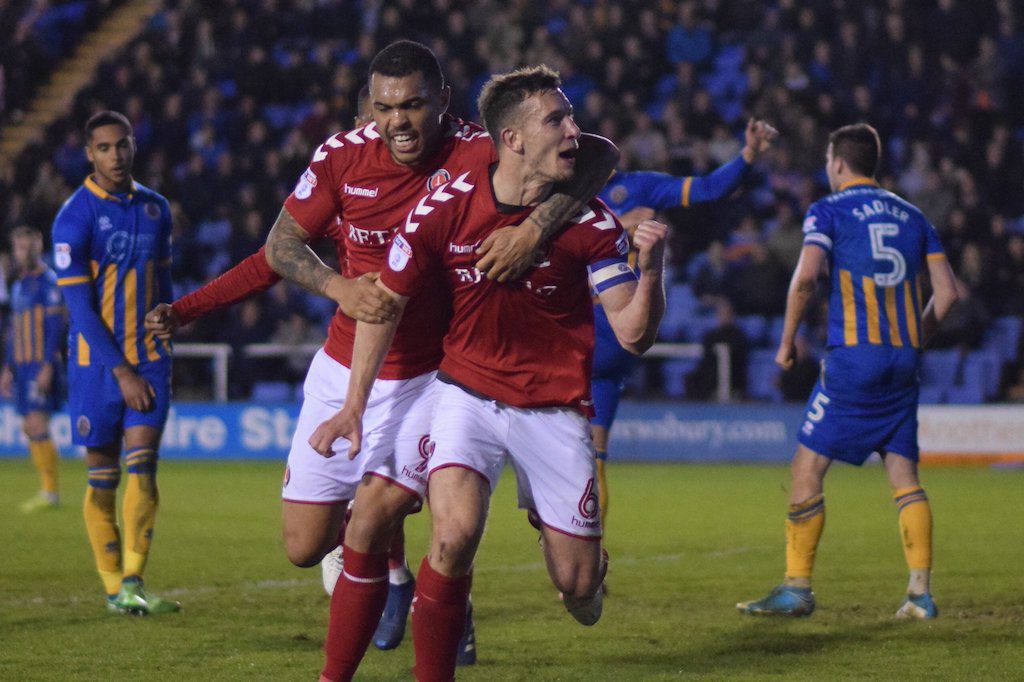 Charlton gave their play-off hopes a huge boost as they secured a critical victory at Shrewsbury Town.

Jason Pearce’s header sixteen minutes from full-time plus Josh Magennis’ injury-time second earned a vital three-points as Lee Bowyer’s men seek to ensure they are involved in the end of season shake-up. They sit fifth this evening, aided by Portsmouth’s 3-1 defeat at Bradford.

The Addicks nearly edged ahead in the opening exchanges. Jake Forster-Caskey’s early corner was only cleared as far as Ezri Konsa, whose drive from the edge of the area deflected just wide.

Paul Hurst’s men quickly grew into the encounter and came close to opening the scoring themselves as Carlton Morris fired Ben Godfrey’s low-cross into the side-netting at the near-post.

The home side edged possession but Charlton had some decent chances on the counter. Arsenal-loanee Stephy Mavididi saw an effort blocked from a tight angle as he seemed to be caught in two minds after Tariqe Fosu slipped him in, allowing the home defence to regroup.

Salop were soon given another let-off as stopper Dean Henderson dropped a Forster-Caskey corner at the feet of Pearce. The defender was unable to poke home before the goalkeeper recovered to smother.

Automatic promotion chasing Shrewsbury looked more comfortable on the ball than their visitors but were unable to find a way past the Charlton defence before the interval.

Northern Irish international Josh Magennis headed a Forster-Caskey corner over the crossbar for the Addicks, before Fosu nearly bundled his way through into the area but was unable to find a finish early in the second-half.

The game seemed to have burst into life all of a sudden, with Morris seeing his shot blocked by Patrick Bauer after cutting in from the left.

Henderson tipped Fosu’s rising drive over the bar, with Pearce somehow unable to scramble the ball home as the resulting corner fell to him just yards out.

The Addicks had their noses in front sixteen minutes from time. Captain Pearce scrambled Forster-Caskey’s set-piece home from close-range to give the South Londoners a vital lead.

Mavididi nearly added a second after pinching the ball inside the Shrews area but the home side looked to try and force the issue as we entered five added minutes at the end of the game.

With every home man forward in the search for an equaliser, goalkeeper Henderson had his pocket picked by Magennis, who chipped into the empty net and fired the Addicks back into the top-six.