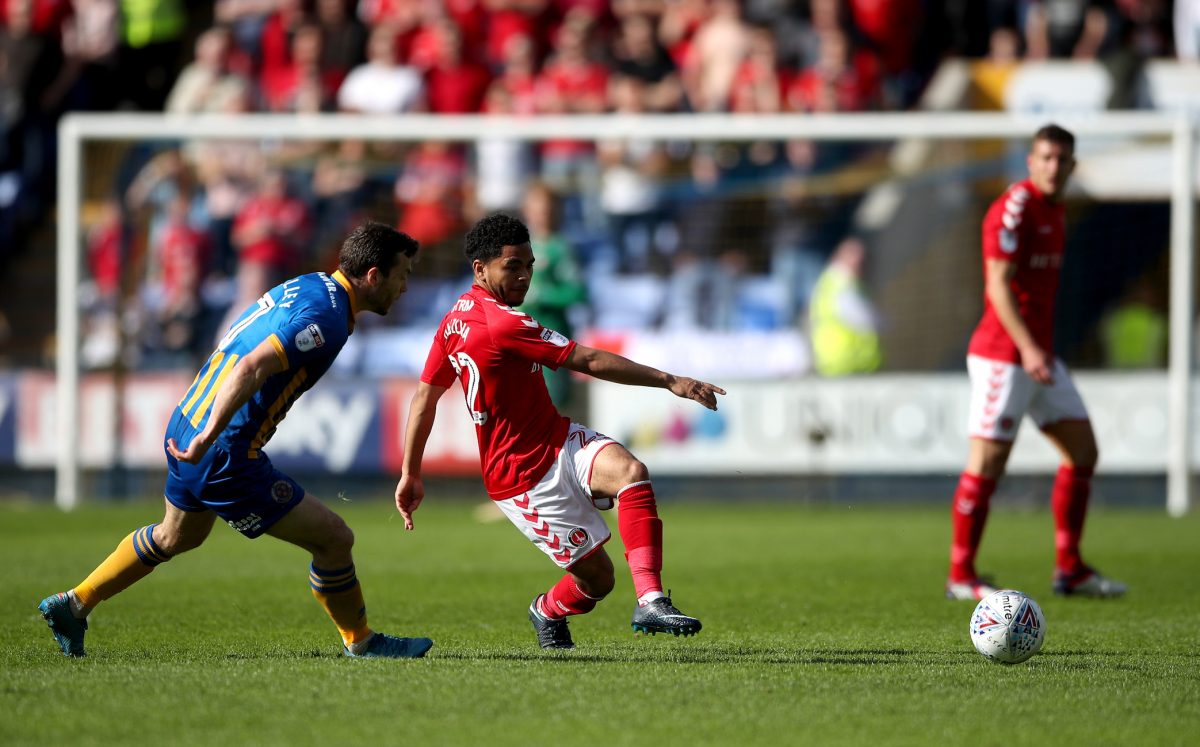 Charlton Athletic’s dreams of Wembley were ended as their attacking shortcomings were punished by Shrewsbury Town.

The Addicks were trailing 1-0 from the first leg and Carlton Morris’ second-half goal at Montgomery Waters Meadow saw them knocked out 2-0 on aggregate.

All five of Charlton’s defeats under caretaker boss Lee Bowyer were 1-0 scorelines and that lack of a killer touch in front of goal was to eventually cost them dearly.

The Addicks manager took a chance by naming Tariqe Fosu in his starting 11 despite the winger being eased back from a previous hamstring injury. But he struggled to get on the ball, a physical Shrewsbury side were happy to give away a stream of free-kicks.

Charlton’s flow was disrupted, as was the case at The Valley three days earlier.

Charlton had periods in the ascendency in the first 45 minutes and looked to have been denied a strong penalty claim when Joe Aribo’s cross from the left of the box was blocked by Mat Sadler’s right arm.

But the Addicks were guilty of not making their patches of superiority count, again failing to take advantage of a number free-kicks in dangerous positions.

And it needed Ben Amos to twice make smart saves at his right post to keep out Alex Rodman shots.

Jon Nolan, whose goal gave the Shrews an advantage going into the tie, looked like he might profit from a lucky rebound off Patrick Bauer but then fired wildly over.

Josh Magennis did acrobatically volley when Tariqe Fosu’s shot was deflected into his path but the ball flew harmlessly off target.

Shrewsbury upped the attacking ante in the second half and began to find plenty of pockets of space to operate in. Rodman produced a tame effort which was easy work for Amos but Nolan was narrowly wide with a low strike just past the right post.

Bauer did head over a deep Jake Forster-Caskey corner but the moments of alarm were coming down the other end.

And on 58 minutes the Shrews extended their overall advantage to 2-0. Morris was on hand to drive the ball past Amos after being teed up by Shaun Whalley.

Dean Henderson – so steady in the first leg – dived to his left to push away Forster-Caskey’s hit from the edge of the box in the 81st minute. It had been a case of the Addicks huffing and puffing without much joy before that.

Amos denied Town a second late on as Nolan beat the offside trap. He tried to lay it on a plate for substitute Stefan Payne but the on-loan Bolton keeper managed to throw his body in the way.

Shrewsbury Town fans raced onto the pitch at the full-time whistle and Charlton’s players threaded their way through to applaud the away fans. Bowyer – taunted throughout – need security to help him off the pitch.