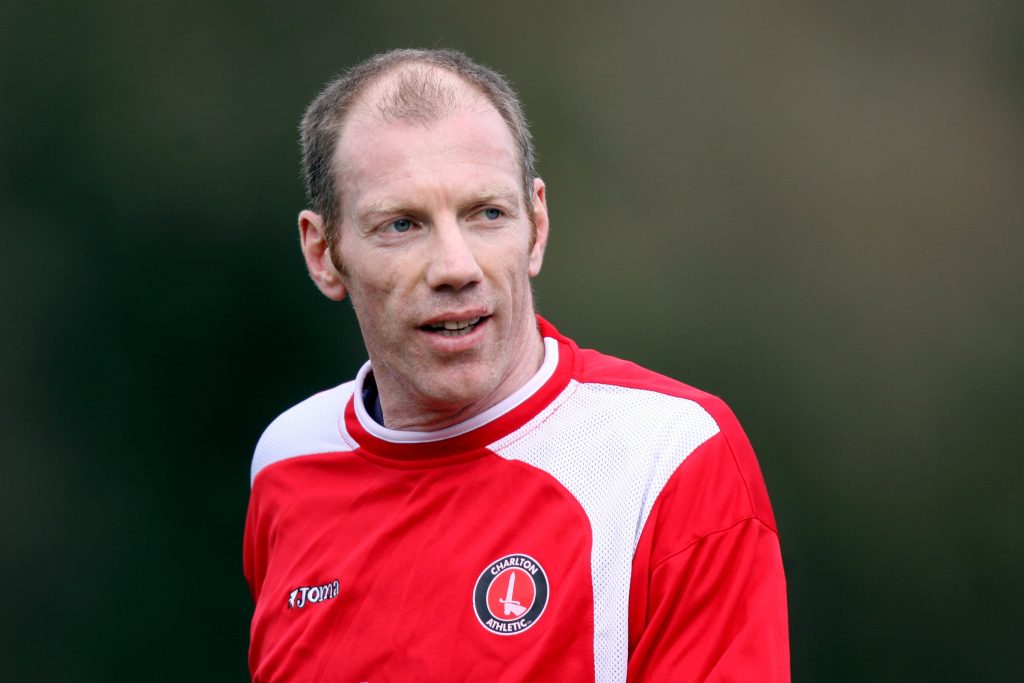 Simon Webster never had any doubt that Charlton would win their first game back at The Valley – but admits it was far from a classic.

The 53-year-old former defender, who captained the Addicks as they ended a seven-year absence from their SE7 home, will be back at the club this weekend as they celebrate the 25th anniversary of their return.

Portsmouth are once again the opposition. A nice bit of symmetry after Colin Walsh’s goal downed the South Coast outfit on December 5, 1992.

Webster, now a physio, said: “The most important thing about the game was that Charlton were going back to The Valley.

“Curbs [Alan Curbishley] and Gritty [Steve Gritt] tried to shield the players away from a lot of the euphoria about getting back there. It was quite hard to stay away from the hype.

“We had a couple of days back there training, to get used to the pitch and the surroundings.

“I can remember there had was a walk [by fans] from Woolwich to Charlton – which had been a protest walk they had made previously. There were lots of balloons. It was a party sort of atmosphere.

“When you nail the game down to its nitty-gritty – we won the game. We’d been on a pretty poor run before that. Curbs stressed that the important thing was to win the game. The occasion was very important for the club, but we needed to get back on track as a team.

“It was a scruffy 1-0 win. We got an early goal and I thought we’d go on and score a couple more. But it turned into a dogged victory.

“It was memorable in the sense we got back to The Valley and I was the captain on that day, a tremendous honour to do. The match wasn’t fantastic – but we were back where we belonged.

“The end of the game was a sense of relief, that we had got it out the way.

“You go into these arenas and you usually have some apprehensions – I didn’t have any for the game. We were always going to win it. As a back four we let in very few goals.

“One of the successes of getting back to The Valley was it brought the players, staff and fans together. When we had the Portakabins, we had no option but to be in with the fans. The receptions were all joined together. You were immediately thrust in with the fans and you had this good banter with them.

“There were so many people who worked so hard to get us back there and everyone was thrown into one room together – you got this strong sense that we are in it together and it’s going to be a good journey.”

Richard Murray told the South London Press earlier this week that Charlton would have died if they had lost their fight to get back to The Valley.

Webster said: “When you’re a player you are not so aware of the financial situation of the football club.

“We’d sold Robert Lee. Rob had gone to Newcastle. They needed the money for that. The key was to get the club back and build the ground up.

“Underneath that the infrastructure was pretty good. Charlton have never not developed youngsters. Underneath the team I played in there was Richard Rufus, Steve Brown and Scott Minto, who had already got into the first-team.”

Webster left the following summer, signing for West Ham United. He suffered a broken leg soon after which effectively ended his career – although he did battle back to play a handful of games for the east Londoners.

“The ground has come on unbelievably,” he said. “I know we had the success of getting into the Premier League. When they won the Wembley play-off final, it was one of the best games I’ve ever seen. I went to support them because I was so desperate to see them go up.

“I knew they would get there, that Curbs would do it in the end.

“It is just unfortunate after Curbs left that it just imploded a little bit. Looking from afar, I can’t see why they got rid of him – or let him go.

“Since then it went a little downhill. They’ve not really recovered. I get the sense under Karl Robinson they are back on track. I don’t think it will be too long before it is back in the higher levels of the Football League – if not the Premier League.”

Charlton was where Webster played the most games of his career – 124 outings after signing from Sheffield United in 1990.

The only reason he says he joined West Ham was to chalk off the achievement of playing in the top-flight.

“My biggest motive was to play in the Premier League. I didn’t go for any real monetary incentive. There wasn’t much difference, apart from West Ham offered me one more year.

“Although I think Curbs would have been happy for me to stay, they got a small amount of money that may have helped financially as well.

“He didn’t really push himself that much to match the offer from West Ham.”

Webster runs a team of eight physios at Nuffield House in Cannon Street. He also runs the medical team for Charlton Athletic Women.

While studying for a degree in physio – going on to gain a Masters in sport and exercise – he worked with West Ham’s academy. He also spent over two years in charge of the medical side at Gillingham.

“When the kids came along I said I would come out of professional sport – because it is all-consuming.”