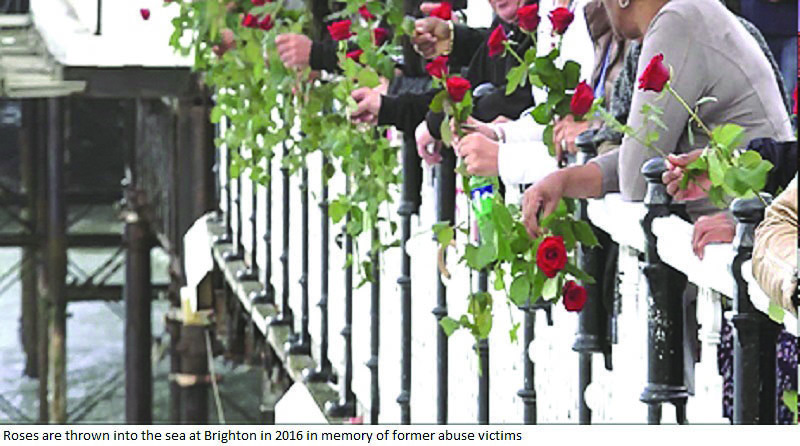 Two sisters whose brother is claimed to have committed suicide after the torment of being sexually abused in Lambeth children’s homes have demanded a new inquest into his death.

James McCourt was said to have hanged himself aged 30 in a Suffolk jail in November 1999 after writing to one sister, Diane, about being sexually abused.

Among the predators who allegedly exploited him were paedophile Michael John Carroll, who was imprisoned for his offences; and John Michell, who died in 2000 before ever being charged.

But James, who was in prison at the time of Carroll’s trial in Liverpool in 1998, never got to testify–- instead he made a full statement to police that September of what had happened to him.

The next year he died in Heathfield Hospital in Ipswich on November 11 – but his two sisters say there are too many unanswered questions about the circumstances of his death.

He was said by HMP Highpoint in Suffolk, where he was serving a four-year term for affray, to have smuggled a razor, either orally or anally, into his solitary confinement cell, then cut his duvet into strips so he could hang himself from the bars.

But he had been seen sitting on his bed with his head in his hands just 14 minutes before – and the prison officer who found him hanged claimed to have had no resuscitation training.

James was on a life support machine for a week in the hospital, without his sisters being told. And then he died hours after an attempt to wean him off the machine – a decision which they say they were not consulted about.

His eldest sister Elizabeth, now 56, was convinced the prison had got the wrong man until she saw him in the mortuary. She now wants the whole case re-examined by the Suffolk coroner’s office.

James was born in Lambeth in 1969 and in care from the age of two. He was moved 42 times between 16 different institutions and carers ­between two and 13. He ran away 24 times in four months in 1983.

He was placed in care at Richmond Fellowship boarding school in Redhill where Michell allegedly began to groom him before being dismissed for molesting pupils.

But the teacher was still able to try to adopt James and take the 12-year-old on holiday to Cornwall where he and his cronies allegedly took turns at raping the boy.

Minutes of a 1999 Lambeth council strategy meeting said: “There is a strong possibility abuse took place. “Much of James’s ­behaviour is indicative of a sexually abused child. There is substantial evidence Michell was a dangerous paedophile and the placement of James with him was of high risk.”

Diane, now 53, who was also taken on the trip to Cornwall but dumped with one of Michell’s friends, did not find out about the rapes until James wrote to her from HMP The Mount in Hemel Hempstead almost 15 years afterwards in 1996.

“I was so angry because I did not know,” she said.

“He told his social worker who did nothing. Everywhere doors were shut in his face. We never got the chance to grow up as normal children. He never had anywhere he could call home.

“When I was told James was dead, you might as well have ripped my heart out.

“The inquest made me disgusted and angry. He was strip-searched before he went into solitary. How could he have smuggled in a razor?

“And the verdict was accidental death – how can that be? None of the pieces fit – it needs to come out. I want justice for his son, who never met him. “The hospital should not have switched off his life support. It was not their decision to make. If he had ended up a cabbage I would have dedicated my life to looking after him – and he would still be here. No one has been held accountable – they all just disappeared in a puff of smoke.

“But [Michael] John Carroll is still alive. He is being protected for not squealing on his cronies.”

Diane was herself raped while in Lambeth’s care, aged 17, and told social services about it. But no police investigation was carried out.

She had to leave Lambeth care that year with a bin bag of clothes and a one-way train ticket to Liverpool.

Elizabeth was ousted from her children’s home early, at just 17.

Within days she was kidnapped and forced into prostitution. Their biological father William McCourt, living in Cossall Walk, Burchill Road, Peckham, was frail when James died, and never saw him get justice.

He died in 2007. Elizabeth, 56, said: “It doesn’t make sense that my brother would commit suicide. If you try to smuggle a blade in your body it will cut you to pieces.

“When I visited that cell, I broke down in tears because it smelt of him. And at the inquest, all the medical staff who made those decisions were not asked to testify or could not be traced.

“I believe his abusers got to him because of what he said in his statement to the police in 1998.

“But there were no statements published about my brother from the Met’s investigation from 1998, Operation Middleton. Nor from Operation Care – the Merseyside investigation into Carroll. If there are any statements about what happened to him, they need to be published now. We have a right to know.

“If it had not been for Shirley Oaks Survivors Association a lot of what happened to my brother would never have come out. Raymond Stevenson and Lucia Hinton are my heroes now – and they are like family to me.

“I promised James as I rocked his body in my hands in 1999 that, no matter how long it took or what lengths I had to go to, I would get justice for him.”

Michael John Carroll was jailed for 10 years at Liverpool Crown Court in 1999 after admitting 35 offences against 12 boys – nine at a Wirral home and the others in Lambeth between 1964 and 1982. He now lives in Shropshire.

A spokesman for the Suffolk coroner service said: “There is a specific legal route to follow if the conclusion of any inquest is to be challenged. At this time, we are unaware of any such action taking place in relation to James’s case.”