The 42-year-old was also arrested on suspicion of possession with intent to supply psychoactive substances.

They have all been taken to a South London police station where they remain in custody. 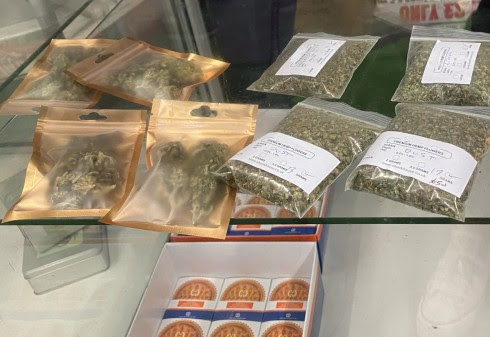 As part of the warrants, officers recovered items including about £20,000 in cash, a large amount of cannabis, 63,000 nitrous oxide canisters, suspected ‘magic’ mushrooms, which is a class A drug, and drug paraphernalia.

A Bitcoin ATM machine was also found in one of the shops. The machines are sometimes used as a method to launder money.

Officers also searched residential properties linked to those arrested and recovered cash and evidence relating to the importation and sale of cannabis.

He has been taken to a South London police station where he remains in custody. Officers searched his house and seized evidence to suggest the supply and importation of cannabis and money laundering offences.

The warrants form part of an operation that was established after officers received intelligence that habitual cannabis users in the Croydon area were buying the class B drug from legal CBD shops. When these users were stopped by officers and found in possession of cannabis, they stated it was legal as they had bought it from a CBD shop.

Cannabis contains both CBD, the medicinal part, and Tetrahydrocannabinol (THC), which is the part that has the psychoactive effects and gives the high.

Enquiries revealed that some CBD shops had been trying to exploit a loophole, where it is ‘legal’ to sell a Home Office approved product, which contains up to 0.2 per cent THC. THC is a controlled Class B drug under the Misuse of Drug Regulations 2001 – whether as a single drug, or as found within herbal cannabis or cannabis resin.

But the law states that 0.2 per cent THC can only be imported for medicinal purposes and can only be supplied by a specifically licensed pharmacy to someone with a prescription – making it illegal for a high street shop in Croydon to sell it no matter the THC percentage.

Prior to the warrants, officers managed to procure several samples of the products from the shops. The samples were sent off for testing and all of them came back as having more than 0.2 per cent THC, making them illegal in any case. Some of the products even stated +0.5 per cent THC on the packaging.

All the products seized in today’s warrants will also be sent off for testing.

Police Constable Ross Bennett, the investigating officer from the South Area Basic Command Unit, said: “Today’s warrants have resulted in a large quantity of illegal drugs being taken off the streets of London as well as cash believed to have been gained through nefarious means.

“Drugs blight communities and ruin lives, and the Met remains committed to robustly tackling those who peddle drugs, as we have done today.

“Unless you are a specifically licensed pharmacy, you cannot legally sell or supply cannabis or THC products – no matter what percentage content it has. Likewise, it is also not a defence to tell officers that you thought your cannabis was legal because you bought it from a CBD shop – it is a class B drug and you will be dealt with in accordingly.

“The evidence gathered during these warrants suggest that these shops are part of a larger organised crime network and are also being used for money laundering purposes. There is a perception that organised crime doesn’t impact the general public, when in reality it’s the origin of many crime types which fuel violence across London. This is why we are continuing to target and dismantle organised crime networks by carrying out operations such as the one in Croydon today.”