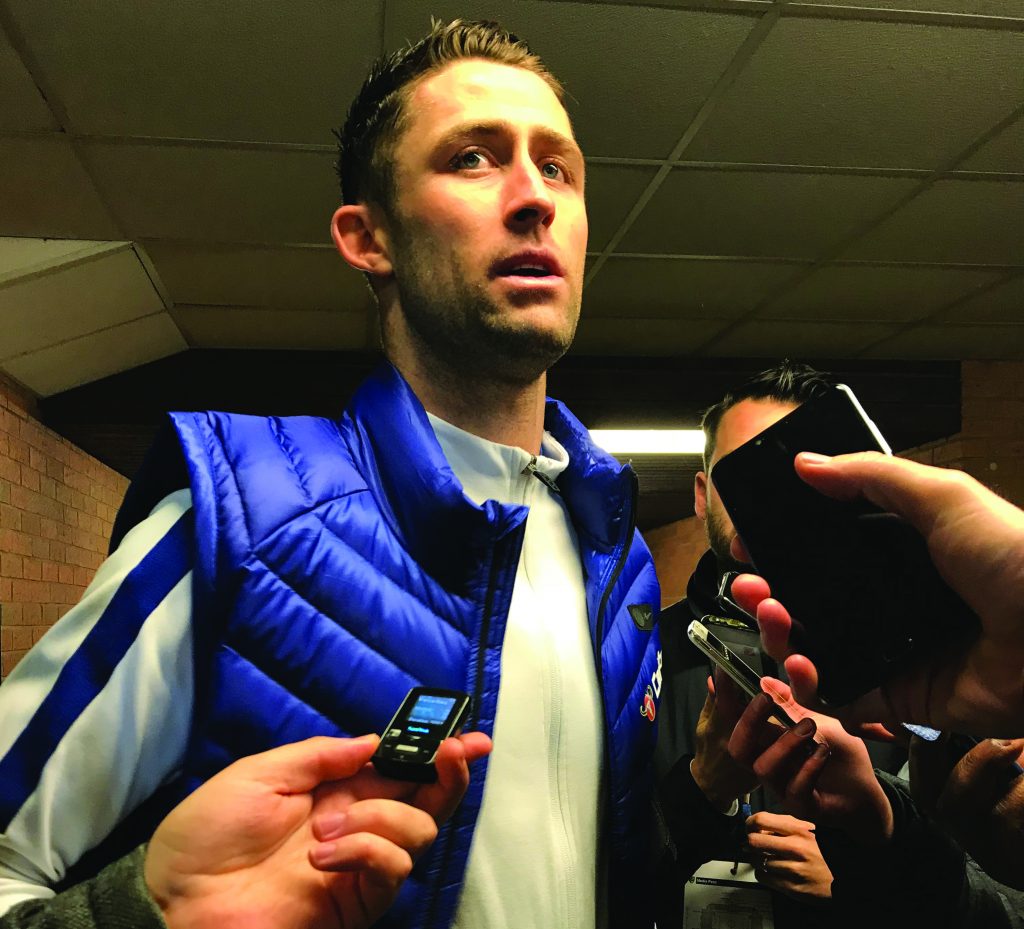 Chelsea Sport
10 January 201810 January 2018 Paul Lagan 0 Comments
BY PAUL LAGAN
paul@slpmedia.co.uk
Gary Cahill is expecting another tough game against Arsenal tonight.
The Blues face Arsenal for the second time in a week, last Wednesday’s Premier League game ended 2-2 at the Emirates.
Tonight, at Stamford Bridge, it’s the first leg of the Carabao Cup. The Chelsea skipper said: “It’s a semi-final, whatever the competition it is and it’s against a big team, so yeah, for sure I am looking forward to that game –  it will be a great tie tonight.
Cahill, 32, hopes that the match won’t pan out like last week’s expansive affair. “I think that game the other day was great for a neutral, but for us it was too open. “But for the Premier League it was fantastic. “We were disappointed not to get the three points. I felt we had the better chances in that game.” Cahill expects Chelsea to be fully prepared for whatever Arsenal throw at them. “We are playing at home, so we are not  looking to sit back and soak up any sort of pressure,” he said.
“We are looking to go forward and attack them. But at the same time, I felt that game was a bit open. So I’m sure the manager, who knows better than me, that is why he is so successful in his job will be prepared. I’m sure tactically we might tweek it tonight – last week could have finished 6-6.”
Chelsea have struggled against sides who sit back – will he hope Arsenal attack more?
“They attacked with numbers last week,” he said. “But they didn’t really get back with numbers, so the game was stretched. “And we have attacking players who can hurt you. We created numerous chances – likewise so did they, that’s why you saw a 2-2 and not a 0-0. But we will see. It will be a good tie.”
Cahill will be expecting Eden Hazard to start and will hope that his ability will unlock the Arsenal defence, something that was missing for the 0-0 FA Cup draw against Norwich City at the weekend.
“When you play a game like we did at Carrow Road, you are looking for a that bit of brilliance,” he suggested. “You can  see the bodies behind the ball, you can see it’s hard. If you have build-up play, they have time to get back behind the ball. You are looking for something a bit out of the ordinary – and a bit special and it wasn’t  quite there at the weekend.”
Cahill is confident that whatever goalkeeper Antonio Conte plays – either No1 choice Thibaut Courtois or Willy Caballero, both will do a good job.
“Personally I am confident whoever plays,” said the 32-year-old. “Willy did well against Norwich. You are not talking about a young player – he is a very experienced goalkeeper and in a big game like that, there will be no problems.
“Obviously with Tibaut, he was brilliant last week against Arsenal – especially the save he tipped onto the post. It was an incredible save. I and the team have confidence in both.
“Willy is experienced, no problem. He won’t be struggling with pre-match nerves or anything like that.
“He has been there and done it. He has played in the Champions League, played for a massive team like Manchester City, and now for a massive team in Chelsea, so yeah, no problems.”
Conte has won only one is six games against Arsene Wenger – if Chelsea are to get to Wembley in the final, that has to change?
“Yeah, for us to go through. Hopefully no extra time either – we have enough games as it is,” he said. “The last couple of times at Wembley have not been successful. But I’ve been on the end of a few wins against Arsenal, especially at Stamford Bridge, so it’s nothing to fear, but we will give them lots of respect. They are a very good team.”