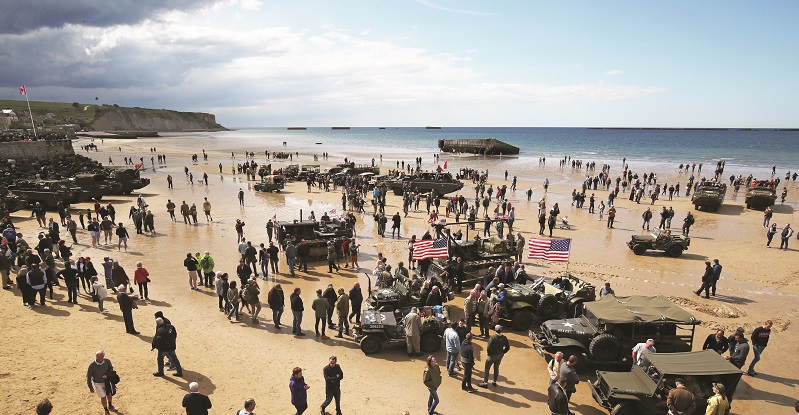 Thousands of South Londoners took part in the biggest invasion in history, the D-Day landings – an event which turned the tide in the Second World War and saved us from Nazi tyrrany 75 years ago last week.

Only a few of those heroes are still with us. Some of them took part in the anniversary celebrations, thanks to The Taxi Charity for Military Veterans, which has been organising trips for former servicemen for more than 70 years. JOSHUA NEICHO spoke to a few of them.

“I did 50 years as a cab driver” says Richard Forrester, 93, in front of a queue of black taxis and chatting cabbies. “They don’t seem to have changed much. They dress different. They’re younger. They still have a better outlook on life than most people.”

You can’t help but smile at this, since Waterloo-born Mr Forrester is dressed rather distinctively in a beret and bottle green King’s Rifle Corps blazer festooned with badges and a row of medals.

He is one of the last surviving ex-cabbies to have served at D-Day and in the Normandy campaign that followed.

We’re not at a taxi rank or at an anti-Uber protest, but in a Channel ferry boarding area for the start of a very special D-Day anniversary charity mission.

The Taxi Charity for Military Veterans was set up by London taxi drivers in 1948, and has taken disabled Second World War veterans on a trip to Worthing every year since then. Forrester has been involved in the charity for almost 40 years.

Recently, activities have expanded to co-ordinating fundraising collections by veterans at railway stations, and organising anniversary battlefield trips in a convoy of cabs to Normandy and the Netherlands.

One group has just been to Berlin to commemorate the airlift. Drivers freely volunteer their time and their vehicles. They’re matched geographically with veterans – mainly Londoners but increasingly from other parts of the UK as the number of Second World War survivors diminishes – take them shopping and run errands for them.

Chairman Ian Parsons notes both the “wonderful relationship between drivers and veterans”, and the way the charity has become a social club for old comrades. This week’s trip takes in a reception at Caen Town Hall, and commemorations at the Pegasus Memorial and in the village of Amfreville.

About 36 veterans, joined by family members and carers, are taking part including Military Medal-holder Jeff Hayward, who served through the entire length of the war and is about to turn 100, and D-Day switchboard operator Marie Scott, 92, from Kennington who feels “a sense of disbelief” to have been awarded the Legion d’Honneur.

It is Scott’s third year of being involved with the Taxi Charity. “They are friendly, generous, funny” she says of the drivers. “They’ve always got funny stories to tell. It’s a joy being part of this organisation, I’ve had such pleasure.”

The veterans reflect on the horrific losses in what one calls the “bad dream” of their war service.

Chelsea Pensioner Roy Cadman, 96, was a paratrooper in 3 Commando. Before D-Day he served extensively including surviving a bullet through the lung and being taken prisoner in Sicily. In the atrocious weather conditions of June 6, he lost 30 comrades at once when their landing craft foundered.

“Sometimes it gets on my bloody nerves” he says. “I get bad nights when it affects me during the day. I lost a lot of friends all over the place. This is why I go out there every year. I take six wreathes with me. I lay them at various places.”

Bill Gladden of the 6th Airborne Army Recce Regiment, 95, landed on June 6 and was wounded out of action 12 days later when his ankle was blown off up to the Achilles tendon. Of his comrades, he said: “I was sorry to leave them. I envy them now, when I meet people, what they went through afterwards, I missed all that.”

Mr Forrester laments the heavy French civilian casualties through the bombing of Caen and other settlements. Hunter Class Destroyer crew member Morris Baum, of Russian Jewish background, said he wished more people realised what the Russians went through in the conflict, when they lost 27 million people.

Veterans tell me that they wish schoolchildren learned more about the Normandy invasion in school – and that politicians read more history. They also recall the effects of the war on London.

Bill Gladden’s parents’ house in Woolwich shook every time there was a raid and an ack-ack gun was wheeled out. A near neighbour who was a young mother as out with her baby when a V2 landed – no trace of them was found.

In Dagenham, Women’s Auxiliary Air Force member Ruby McCrudden lost her father, who worked for the Gas Light and Coke Company, for four days. He reappeared in the garden just as her family were anxiously scanning for a German parachutist who had come down at that moment.

Marie Scott’s formal education ended at 13 when war broke out, and her mother chose not to evacuate her and her sister. She recalls seeing the “reddened sky [stretching] for miles and miles and miles” when the docks were bombed, and has happy memories of London at the end of the war, such as the reopening of the Royal Opera House albeit with only benches to sit on.

Some of the veterans have very current issues on their mind. While in general feeling that “I’ve got to the stage where I let everything happen around me”, Cadman’s parting shot is – “Don’t talk to me about Brexit.

I want to be sick every time I hear it. They can’t make up their stupid, thick minds what’s happening. “I voted to stay in Europe” he says. “I hope that we all get another vote” – and 75 years after a wave knocked him into the Channel on D-Day, he would vote to remain again.