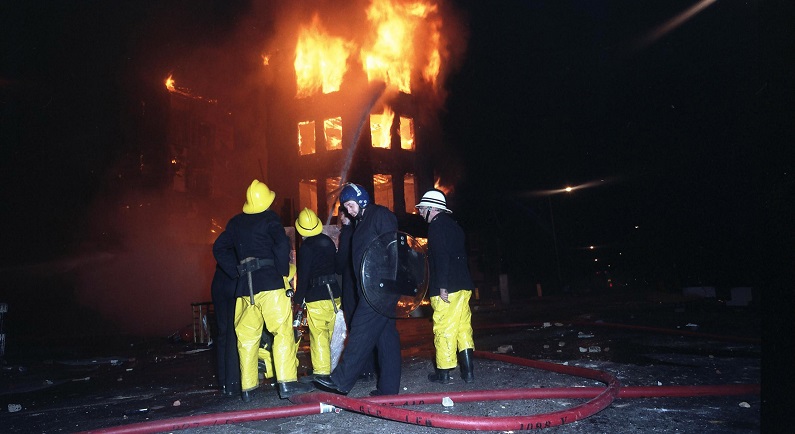 A public consultation is currently ongoing investigating plans to relocate the museum of the London Fire Brigade. Lambeth council wants your views on the proposals, which would see a new, permanent museum built at 8 Albert Embankment, next to Lambeth fire station. Here Toby Porter takes a closer look at the history of the brigade in Lambeth and the plans for the new museum.

The London Fire Brigade has a close connection with the borough of Lambeth, from the Albert Embankment fire of 1918, to the headquarters and workshops being located there from 1937 until 2008.

The LFB’s headquarters were opened at 8 Albert Embankment by George VI, who had only been king a few weeks, in 1937.

The LFB museum was originally located in Lambeth beneath the bandstand at brigade headquarters.

As early as the 1930s artefacts were collected all illustrating the history of the fire service in London.

In 1966 the museum moved to Southwark and later opened its doors to the public.

It was closed in 2015 and replaced by an Albert Embankment pop-up museum in November 2016.

It is planned that in 2023 Lambeth will once again be home to a permanent museum at Albert Embankment.

The relocation will enable the museum to have a more flexible space, with unique features including a view into Lambeth fire station and exciting new exhibitions.

The public consultation for the redevelopment of 8 Albert Embankment is currently open and will close on June 3.

Further plans for the transformation of the site include the provision of a new fire station, new homes – a number of which will be affordable, new workspaces supporting local businesses and creatives, more than 1,250 jobs, high-quality public spaces for the community and a mix of new retail spaces, which will enliven Lambeth High Street for the first time in many years.

The museum was in Winchester House, Southwark from 1966-2015, at the former home of Captain Sir Eyre Massey Shaw, who was Superintendent of the Metropolitan Fire Brigade.

But Winchester House closed its doors to the public in September 2015, and the collection was audited and put into storage pending the opening of a dedicated new museum.

In July 2015, members of London Fire and Emergency Planning Authority agreed to make the provision of a new museum, as well as a fire station, a condition of the sale and redevelopment of the brigade’s old headquarters on Albert Embankment in Lambeth.

There are still opportunities for the public to view the historic collection, with temporary exhibitions across London, outreach visits and educational talks and lectures and events to commemorate the 150th anniversary celebrations.

The museum is open from Wednesday to Sunday, 10am-4pm. There is no need to book.

The Albert Embankment museum, due to open in 2023, will be part of the brigade’s old headquarters, a beautiful grade-II listed building on the bank of the Thames, alongside Lambeth fire station, which will be modernised, greatly improving the facilities for firefighters and the community.

Comments on the planning proposals can be submitted online to Lambeth council.