Many police officers wonder what they’ll do when they retire. They might write a novel, start a new career, drive a cab or move to sunny Spain.

How about a film extra? I discovered something very interesting while watching the credits at the end of Blackmail, the 1929 thriller directed by Alfred Hitchcock.

It is a smallish supporting role but the only one that I am aware of that is played by a real life – albeit retired – police officer.

Historically the film is important. After starting production as a silent film, it was decided to convert Blackmail into a sound film during the filming.

This was to exploit the sudden popularity of sound films, known as Talkies.

Further investigation reveals that Mr Bishop can also be seen in Hitchcock’s 1935 classic The 39 Steps.

He is clearly visible in a policeman’s uniform in the climax to the story which involved its star Robert Donat being filmed on location at the famous London Palladium.

DS Bishop’s placement in these films is especially curious since Hitchcock often expressed a fear of British policemen that started when he was just five years old.

Hitchcock described himself as a well-behaved child but his father had a cruel streak. At the age of five, Mr Hitchcock sent his son to the local police station in Leytonstone with a note.

When a policeman read the note, he locked the little lad in a police cell for five minutes, saying: “This is what we do to naughty boys.”

The experience traumatised him and left him with a lifelong fear of policemen. 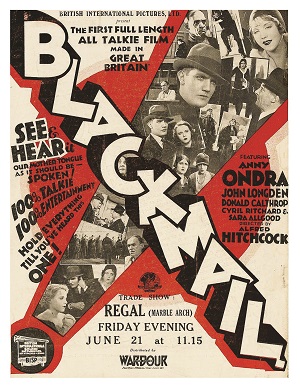 In 1973, Hitchcock, famous for such scary film classics as Psycho and The Birds, said he was “scared stiff of anything to do with the law” and wouldn’t even drive a car in case he got a parking ticket.

Hitchcock’s biographer Donald Spoto explained in The Dark Side of Genius (1983): “Throughout his life, Hitchcock insisted that his brief boyhood jailing scarred him for life with a terror of the police, and he pointed to the recurring motif in his work of the innocent man, arrested and imprisoned, as an attempt to exorcise the childhood trauma.”

Through some research with the Metropolitan Police Heritage Centre I found that the likeliest officer is Detective Sergeant James Bishop (Warrant No. 85202) who served as a police officer from 1899 to 1925.

In the 1901 census then-Constable James Bishop was shown as residing in the section house of Southwark police station in Borough High Street.

By 1911, the census showed that he had been promoted to Detective Sergeant and lived with his wife Maude and three children at 47 Marlborough Road off the Old Kent Road.

The question now is why Alfred Hitchcock used DS Bishop in two of his films, especially given his expressed fear of police?

Despite pouring through a number of books about Hitchcock and contacting experts on the legendary film director, the trail of the elusive DS Bishop has gone cold.

But the case continues.