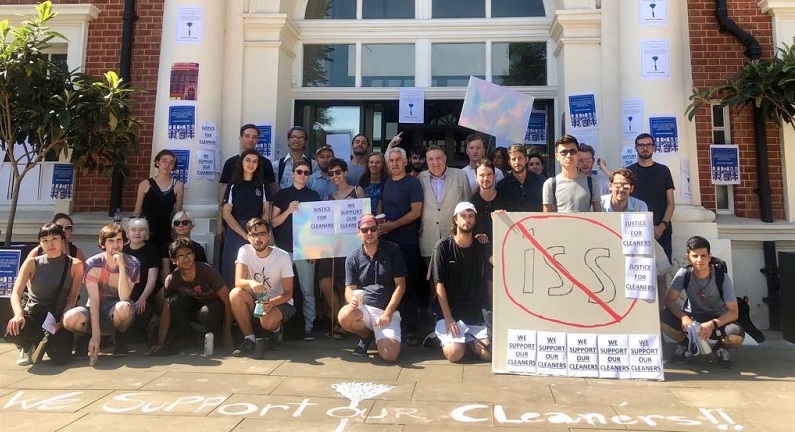 Students and academics are calling on a university to bring their cleaning staff in-house.

Staff, students and unions set up a picket line outside Goldsmiths, University of London, to protest against changes to the cleaning staff’s working arrangements.

Cleaners at Goldsmiths, who are provided by contractors ISS, have had their working hours changed, with some having their hours cut by 10 hours a week.

Roberto Mozzachiodi, a spokesman for the Justice for Cleaners group, said: “ISS’s changes have been a disaster.

“They’ve been forced through without the cleaners having a say in the matter.”

This means that some staff have lost two hours a day from their contract.

PHD student and member of staff Mr Mozzachiodi, 30, said: “Some staff have not been able to come to work because the changes came in so abruptly.

“Because of that there are about four people doing work that 10 would struggle to do.

“ISS brought in these changes during the holiday period. Maybe they thought that it might go under the radar but we are kicking up a storm.

“About 350 of us signed a letter to the university council asking them to intervene.”

The current cleaning contract with ISS has run for almost three years and it is due to come to an end on October 31 this year.

One Goldsmiths student, Sophie Porter, 25, said: “I stand absolutely with the campaign to bring the cleaning staff of Goldsmiths in-house.

“The contractual changes made by ISS are a perfect example of how our present culture of privatisation and outsourcing is socially unethical – cutting pay and increasing hours and job insecurity, making decisions without consulting those it will affect, it lacks any semblance of humanity.

“All university staff should receive the same level of security, working conditions and, above all, respect.”

A spokesman for the Goldsmiths said: “We are seriously considering insourcing as an option as we decide whether to award a new cleaning contract.

ISS cleaning staff and their recognised union were made aware of the proposed changes to shift patterns in April this year, and a formal consultation between the various parties has been taking place since then.

“We acknowledge the concern some Goldsmiths staff and students have expressed about the terms and conditions of cleaning staff and we have made clear our proposals to align them with Goldsmiths’ own terms.

All cleaners currently working at Goldsmiths are paid the London Living Wage.”

The Mercury contacted ISS but it had not responded by the time we went to press.