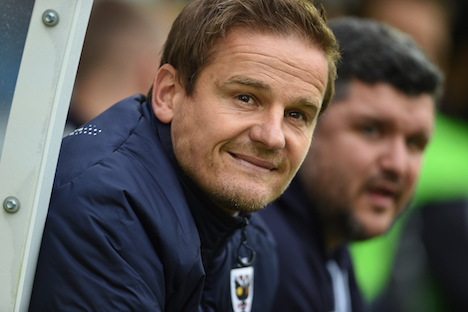 AFC Wimbledon take on League One leaders Wigan Athletic tomorrow at Kingsmeadow – and Neal Ardley is in no doubt that they are top of the table on merit.

The Latics are not only the top goalscorers (38) in the division but also boast the best defensive record with just 12 conceded in 20 matches.

Paul Cook’s side have lost only once in the league since September 23.

“I’m quite big on data and stats,” said Ardley, whose Wimbledon side are 20th in the table. “The season we got promoted [from League Two] the stats told us at Christmas that we were underachieving massively.

“Our stats at the time were the second best in the league and there were games we should have been winning. The second half of that season told the story.

“This season we have got quite a lot of data and all that tells me Wigan are top of the league because they are by far the best team in the league – the stats back that up. They have had the fewest amount of attempts on their goal, produced the most attempts and quality chances.

“That also applies to their possession and spells in matches. It’s what Paul Cook’s teams do. You put it all together and it makes it a real challenge for us.

“Statistics is getting bigger in football now. There are lots of different websites and analytics.

“We all know about expected goals (xG) now. You can look at stats that say one team had 14 attempts and the other had 12; but that doesn’t tell the story if those attempts are 45 yards out and off target – the chances of scoring are slim.

“If you are Paul Cook and you are looking at those stats when you have a little spell that it is not going so well you would say ‘keep it going’. Sheffield United had a little spell last season where they lost a couple and everyone was reporting they were wobbling. But I remember looking at the stats and they showed that Sheffield United couldn’t possibly do anything but win the league if they kept going the way they were.

Only Northampton (six) have scored less at home than the Dons (eight). Wigan have the best away defensive record with just eight let in.

There have been signs that the frontline are beginning to click with both Lyle Taylor and Cody McDonald on target in the 3-1 FA Cup win over Charlton – the former excellent as he netted twice.

Kwesi Appiah resumed training this week but is being eased back from a hamstring injury.

“Defensively we are one of the best teams in the league as far as quality and quantity of chances against us – that’s brilliant. ,” said Ardley. “But offensively we are well down on where we should be.

“The good news is that we have created a real edge of chances in terms of good quality and quantity but haven’t been taking them. That’s why we’re where we are in the league.

“It is a glaring stat. But we’ve got a bit of confidence into the forwards and only lost one of our last six matches [excluding the EFL Trophy tie].

“We need to try and keep the defensive side going while trying to express ourselves a little bit more.”

Wimbledon’s match at Bury was postponed just before noon on Saturday. Heavy snowfall saw the game called off but shots of the Energy Check Stadium not long after seemed to show the ice had thawed.

Ardley said: “It’s a really tough one for refs – they come in for a lot of criticism. Did he make a mistake – could the game have been played? I think he did, but at the time he called it off we were getting ready to leave the hotel and I didn’t think the game would go ahead. The snow was coming down like nobodies business and the forecast was that it was going to be in for the day.

“There was no frustration. It’s only worth getting annoyed at things you can control. We can’t do anything about it. We’ll have to go back up there on a Monday for a Tuesday night game – that’s going to be a pain with the FA Cup tie and a re-arranged match against Blackburn. We’re going to end up with some congestion down the road.”

Wimbledon’s trip to Tottenham in the FA Cup third round on January 6 is appetising for Ardley, even if he knows it is not the largest financial earner the South London club could have secured.

“You want a big club for a number of reasons,” said Ardley. “One is that is what it might bring the club financially – because every penny counts for us. Getting a big team away makes your chances of progressing slimmer.

“But another reason you want it is for the grandeur of getting to face top-class players and managers. Spurs at Wembley says it all. Mauricio Pochettino is one of the best bosses in the world and I’ve got a lot of admiration for the way he goes about things.

“Financially it is not going to be anywhere near as good as we hoped in terms of the attendance and ticket prices. That’s a slight downer on it from a club perspective, but I’ve always dreamed of having my club at Wembley – I’ve done it once and been victorious. To be there again against a team of Spurs’ ilk is a dream to me. I push finances to the side. This is as good as it gets.”