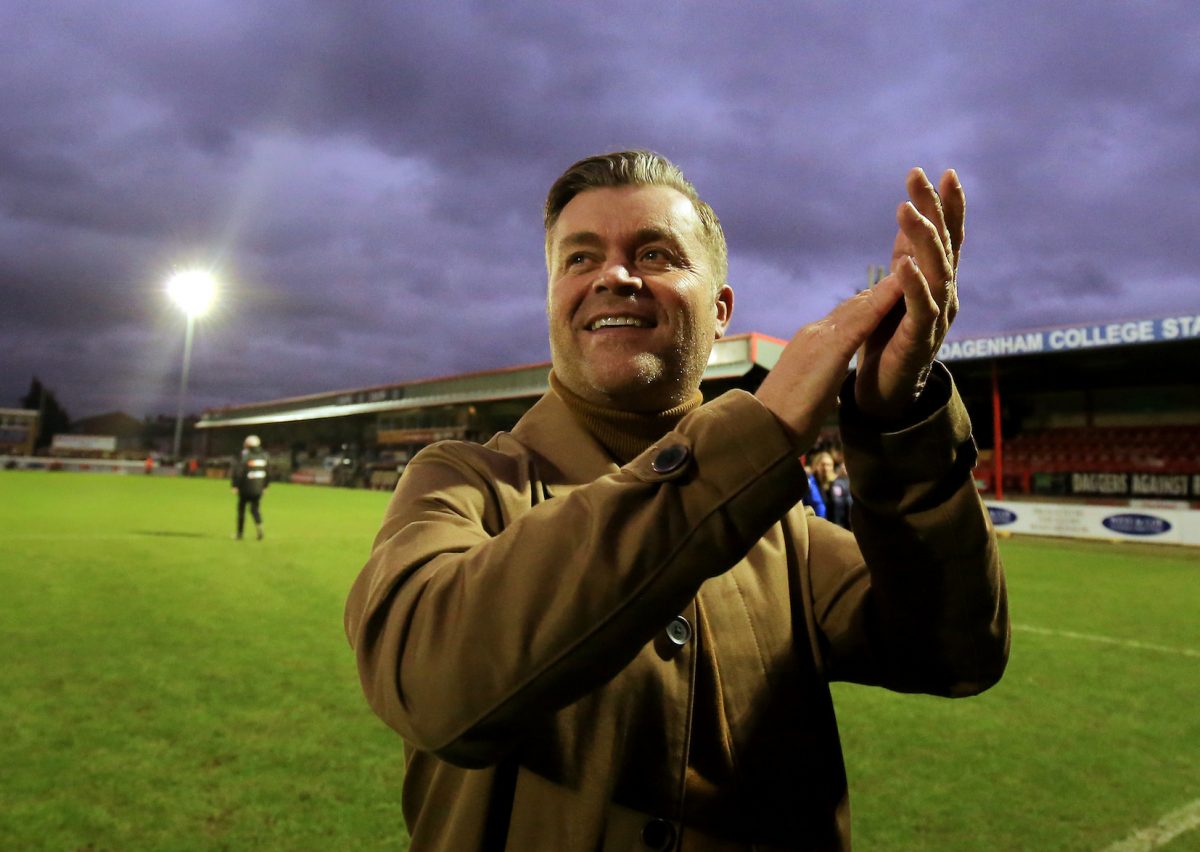 New Welling United manager Steve King reckons the minimum target for the National South outfit is the play-offs next season.

The experienced King signed a two-year contract with the Wings last week and immediately started to reshape his squad as he brought in four new players.

Welling chairman Mark Goldberg has gone for experience to replace Jamie Coyle. King has had plenty of success – and he is expecting the same to be the case at Park View Road.

“There is no target. Nothing has been set saying I need to do this or that. But knowing me as a manager I have come first, second, third, fourth and fifth – I’ve had four play-offs. I know the level better than anybody.

“The only pressure is what I put on myself. My target is the play-offs, minimum. That’s how I am as a manager. It is not something I just want to be in, I need to be striving.

“If we don’t make the play-offs that is not enough for me.”

King went back to Whitehawk in mid-September with the Sussex side winless and rooted to the foot of National South.

Despite pepping up their fortunes he was unable to fashion a great escape as they finished 21st in the table.

King has signed a three-year deal with the Hawks but his exit by mutual consent was confirmed on May 16.

He is not willing to discuss what led to a parting of the ways. “I was getting phone calls left, right and centre and one of them was Mark [Goldberg, Welling’s owner]. I’ve known him anyway over the years when we have come up against each other. I sat with him for a couple of hours and realised he had a vision. I feel I’m the person who can help him with that vision.

“As soon as I left Whitehawk my phone was just on fire. I had offers from Conference North and National League clubs. I thought what was being said here was right for me. I like the plan is longer term, not just short term. I want to be at a club for a sustainable period of time.”

King has signed England C goalkeeper Daniel Wilks, who finished last season on loan at Colchester from Maldon & Tiptree. He has added attack-minded full-backs in Jordan Gibbons and Craig Braham-Barrett along with exciting winger Zack Newton.

Asked how many more he needs, the Welling boss adds: “A lot. The thing is I know all the players. I don’t need to say ‘I need to see you in pre-season’. I’ve seen them. I watched Welling five times this season and I know what the capabilities of the squad are.

“They are not bad players, any of them. Welling had a half-decent season. But if I want to improve on last year’s performance when the club finished 10th, then I need to improve the personnel.

“The league will be even stronger this coming season. It will be the best one yet.

“Some of the group are good enough in my opinion, and some are not.

“Don’t get me wrong, we’ve got players under contract like Jack Jebb, Connor Dymond, Jack Parkinson, Adam Coombes and Bradley Goldberg. The nucleus of the team is there.

“I’ve got good players but it is whether I can also bring in better in some positions for the same money. Our budget is competitive.

“I always believe in facts and stats. Stats don’t lie. Stats are stats. If we have scored 50 goals and let in 40 then that is what we’ve done. I’m a matter-of-fact person. And in the league we’re in now I can pretty much judge who the runners and riders are going to be straight away.

“It will be a tough, tough league – and an exciting one. You have got Woking, Torquay, Billericay and Dulwich Hamlet in there – Junior Kadi [Hamlet assistant manager] used to play for me. Hampton & Richmond never made it in the play-offs. Then you have Dartford, Chelmsford and Hemel Hempstead. It is going to be a helluva league.

“That is why I feel we have got to bring in some better players to compete with that.

“If everyone else is getting stronger and we don’t then we’ll be left behind.”

A web search of King brings up a piece in The Guardian detailing how he was sacked at Lewes for being “too successful”.

He had taken the club from the Isthmian Division One South to the what is now the National League – winning titles along the way.

Two play-off finishes saw them not allowed to compete in the knockout format as their stadium did not meet Football League standards, their opponents receiving byes into the final.

Kevin Keehan, the commercial director at Brighton, was King’s successor and the Rooks suffered back-to-back relegations.

“I’ve made history at every club I’ve been at,” said King. “I have earned over £1million for people in money from FA Cup runs.

“I made history at Lewes, Whitehawk, Farnborough and Macclesfield.

“I’ve sold 28 players in my career, probably the most in non-league, who have been worth £60-70million.”

“I was the one who spotted Chris Smalling,” he said. “I knew Barry Dunne at Millwall and told he had to sign him. Barry said he would get someone to look at him and I told him ‘go and sign him’ because Middlesbrough wanted him as well.”

King does not have any one standout moment in his career.

“It is different moments with different emotions. At Macclesfield we knocked out Cardiff, who were top of the Championship, in the FA Cup and lost to Wigan, who eventually won it.

“Then there was being top of the Conference with Macclesfield – that was big. Winning three promotions with Lewes, who were a little town club – going from playing in front of 200 or 300 people to gates of 2,000.

“There are so many because I have brought success to every single club. I’ve been lucky to have a good non-league career.”