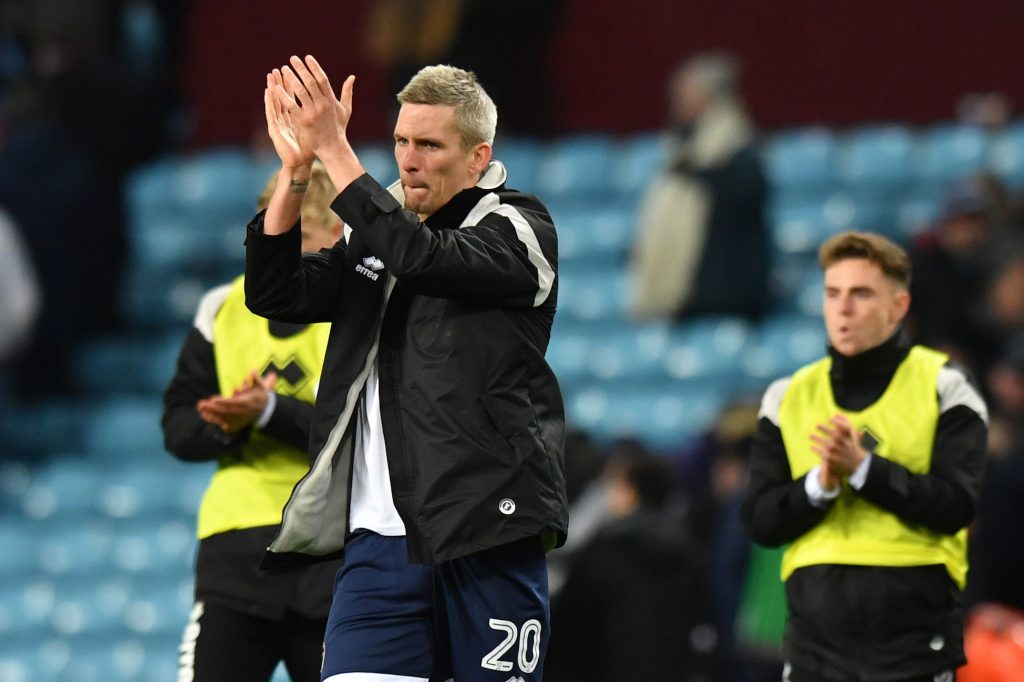 Steve Morison signed a new one-year contract yesterday – and reckons his performances have deserved the extension.

The Millwall striker has triggered a clause in his contract after playing 20 games in the Championship.

And although Morison has failed to net this season, he is in no doubt over the influence he has exerted over the Lions as they have acclimatised to life in the Championship.

He said: “Contrary to what people might say – because I have not scored a goal – I think I’ve earned it. I’ve been key to the games we’ve won this season and the results we have got. I think I’m right in saying we haven’t won a league game unless I have been on the pitch.

“As long as I’m contributing then I want to carry on playing – and I feel I am at the moment.

“The only place I’m not doing that is in the goals for column.

“That will be my aim for the second part of the season. I’m a striker – I should have scored some goals and I haven’t. But there’s a lot more to what I do on a Saturday or Tuesday evening than just score goals.

“People within football and who understand football, they know that. I’ve had plenty of compliments along the way this year from other managers and players. There is only one person I need to impress and that’s the gaffer. I seem to be doing that. He’s looking after me and hopefully I can repay him with some goals and we can get safe in this league.”

Morison’s new deal does not contain another automatic extension. The club has moved to 12-month deals for players over the age of 30.

“When the manager came in he set his stall out that everyone  over the age of 30 – unlike the Steve Lomas and Ian Holloway spells – would be on year-to-year contracts,” said Morison. “Hence why Byron, Shaun Williams and I’m on that.

“After that, Neil and the club want us to work for our year – not just have two or three years there for us to enjoy it.

“We have to earn it. It could contribute to keeping us hungry. But with the players here who are in that situation you don’t have to worry about that – we’re hungry and have that mentality anyway.

“That’s it now. Next year I have to earn a whole new contract – it’s a different ballgame altogether.

“I haven’t overly-thought about the future. My focus is purely on playing. I’ve done bits and pieces of coaching at other places but while I’m at the football club I want to be playing. If I’m not then I want to stop altogether and I’ll go into the other side of the game.

“Until then I want to contribute. At the moment that is by playing and putting performances in – next year it might be totally different. Do I become a sub and have to contribute off the bench? If that’s it, I change my mindset. I just need to worry about this year and then see what happens in pre-season.”

Morison’s last goal in a Millwall shirt was a hugely important one – the Wembley winner which took the club up via the play-offs in May.

“It’s been one of my best years in football,” he said. “To have such a good year at this stage of my career has been fantastic.

“I didn’t just want my career whittling away – and it certainly hasn’t. The last two-and-a-half years have been great. I’m still thoroughly enjoying it. To top off 2017 with a few good victories and really cement ourselves in the league would be great.”

Millwall manager Neil Harris said: “I’m delighted for Steve – he’s been a figurehead for the club since my time in charge. His contribution to the team, work ethic and leadership is second to none.

“He has still got a lot of miles left in the tank. You’ll see him on a Saturday still running hard in the 90th minute.

“He is a winner and he wants results. Steve is a huge part of the club.”