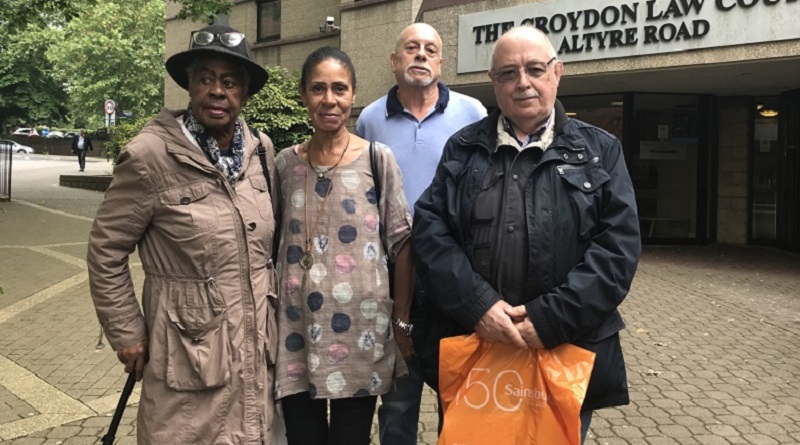 Residents have achieved a victory over housing chiefs who they say left them in leaking flats and waiting months for solutions to problems after a multimillion-pound improvement project.

At least seven people at Macintosh Court in Streatham were left with damp and damaged flats two years ago after Lambeth council spent more than £2million updating their homes.

In some instances, the inhabitants said water has leaked through on multiple occasions and has been running through the electrics, leaving them concerned for their welfare and safety.

But months after they first raised the problem, some said the council had not provided any immediate protection to stop this happening again.

The High Court case due to start on Monday October 11 was due to decide who was responsible – but Lambeth council chiefs and the residents on Friday came to an agreement on a timetable for repairing the shoddy work.

One of the residents, Janet Gayle, whose flat had been flooded 12 times in two years since moving in, said: “There have been 21 cases of water ingress. This outcome admits Lambeth have been neglectful throughout.

“A court hearing would have highlighted their incompetence and any publicity gained may have initiated an inquiry  into Lambeth’s scandalous personnel and contractor selections.

Which,  in the long term, would have benefitted other Lambeth residents who have also suffered at the hands of thoughtless, greedy execs!.

“The modest claims for damages awarded to residents does not reflect the hardship and suffering caused by the disastrous refurbishment of three years ago has had severe impact on residents health and wellbeing.

“Lambeth housing have never apologised to residents here, despite saying they have to the press when questioned.

“It’s a shame that the bill for this legal case will be paid for from council tax as will the ongoing fat cat salaries to the bumbling workforce.”

She said in 2019: “I went away for the weekend and came back to find water coming in and my newly-decorated flat ruined.

“It’s become intolerable having to prepare for the worst every time I leave home and suffering anxiety until I can return.

“I’ve not had any peace of mind since moving in 18 months ago. It’s been non-stop incompetence and feeble excuses.

“Lambeth left us with no protection against further flooding despite them admitting that roofs are defective.”

John Beechey, who also lives on the 43-flat estate estate, said: “We see this as deliberate neglect.

“The council is knowingly allowing our homes to deteriorate.

“It is causing our vulnerable residents to become ill. All this worry and uncertainty is not good for our mental health. The situation is disgraceful.”

Also in 2019, residents noticed new brackets installed to support pipes carrying scalding water around the outside of the first floor of the estate were coming away from the walls.

In June 2019, the South London Press reported that other problems included rodents and ants, and one person slept in his armchair for more than 17 months due to damp and water damage in his flat.

Residents say these problems are still not fixed.

“Lambeth has spent more than £2million on improvements to the building over the past two years, and the vast majority of flats in Macintosh Court have had successful internal works, which have included new kitchens and bathrooms.

“Where there were any mistakes relating to some parts of this work, we have acknowledged these, apologised and committed to resolving them.

“Our responsive repairs and major works teams are working closely together to ensure that all the issues at Macintosh Court are fully addressed.”

Kate Macintosh, the original architect of the complex, hopes that this new agreement shows Lambeth at last wishes to rectify matters.

She is advising the member of staff responsible for organising the works programme,  on the best way forward, both technically and for the least inconvenience of residents.

But she is still concerned that a defective junction between the roofs and the walls which allows rain to seep below the waterproof membrane looks set to be replicated in the re-roofing.

She alerted Lambeth to this defect three weeks ago but has seen no revised proposal.

She said: “The works need to be carried out in a logical sequence.

The service pipes from the boiler room to each flat should be rerouted as soon as possible so the old pipes can be removed from over the walkway. Only then can that structure be repaired and the roof made weather-tight.

“Failure to pre-plan and programme the works logically was one of the reasons for the chaotic outcomes of the earlier contracts which have wasted so much money and caused such suffering for the residents.”