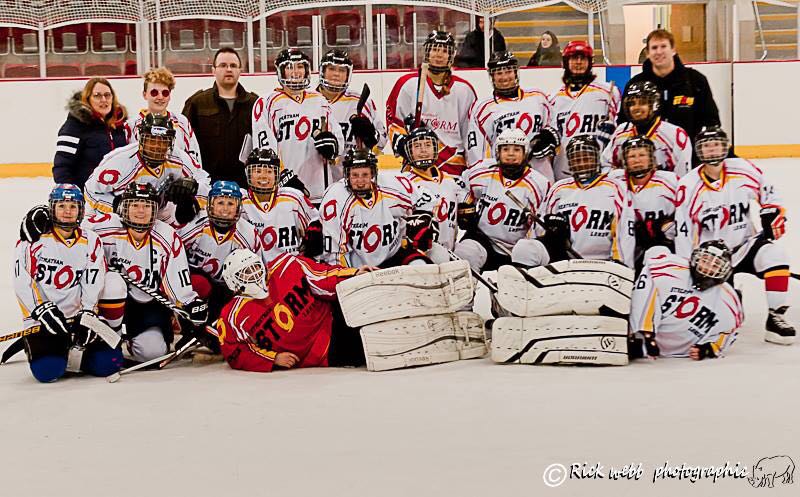 Aneta Syposz celebrated her return to action after maternity leave with two goals and an assist, as Storm stayed level on points at the top of the division with Basingstoke Bison Ladies, who still have two games in hand in the race to top the third tier of the domestic game.

In a double-header at the Streatham arena, Storm’s top-tier Elite league team took the lead over reigning national champions Bracknell Queen Bees thanks to an outstanding solo goal in the first period by dynamic defender Jamie Endrizzi.

Endrizzi rushed the puck out down the left wing, shrugging off several backchecking defenders before cutting in towards goal and whipping into the net to give the home side a massive boost.

Storm held on to the lead until just short of the halfway mark in the match before Bracknell found an equaliser. The visitors finally wore Streatham down in the third period, running out 5-1 victors. But Storm, who next face bottom club Sheffield at home on March 10, were encouraged by their toe-to-toe showing against the runaway league leaders.

“The D1 squad continue to show why they have become real contenders in their league, with a strong performance against a top-four rival,” said head coach Sam Nicoll. “In the Elite league, I’m still confident we will get the points we need to reach our goal for the season of consolidating our place among the top-ranking clubs in the country.”

In the Division One game, Syposc got the opening goal in the first period. Invicta’s league-leading goalscorer Lucy Gruber – an under-21 player who later guested for Storm Elite – grabbed an equaliser before Parris Moore restored the lead with a power play goal, from an assist by Annette Kerr.

Syposc fired in a short-handed goal early in the third period, set up by Laura Hunnisett. Shauna Mann joined the scoring from a second Kerr assist before Gruber pulled one back for Invicta. Hunnisett settled the game with a fifth for Storm, with the helper coming from Syposc.

The weekend saw the final game for Storm by Danielle Hogan, who is returning to Canada after several seasons as a club stalwart and proven goalscorer in the Premier and Elite leagues.

“We’ll really miss Danielle,” said club chair Fiona King. “She has made a great contribution and we’re very sad to see her go, but we wish her all the very best for the future.”

The next home fixture is on Saturday March 10 at 18.50 against Sheffield Shadows. Entry is free.