A well thought-through and brilliantly executed example of theatre at its best.

The directing by Kimberley Sykes is superb, as are all the actors’ performances.

It shows just how well actors and creatives have used the recent enforced lull to hone their craft.

If you love Shakespeare, you must go. Romeo & Juliet is one of Shakespeare’s earliest works, in which he began to develop his unique talent. It remains one of his most popular plays, that has spawned numerous movies, ballets, and musicals.

The tale is ancient. The two warring families, the Montagues and Capulets, are mentioned by Dante in his Divine Comedy, written nearly 300 years before Shakespeare’s play.

And yet the themes are somehow eternal. There is something that captures the popular imagination about the star-crossed young lovers, who teach us “Don’t waste your love on somebody who doesn’t value it.”

Perhaps for contemporary post-Brexit London audiences we also identify with the constant internecine warfare that is the backdrop to the play.

The lovers’ youthful optimism snuffed out by bitter civil war in Verona.

This production’s director, Kimberley Sykes, is famous for directing new work at Southwark Playhouse and Theatre 503.

She brings so many new touches to this production. She makes it particularly relevant by emphasizing the post-apocalyptic element that is relatively small in the original text.

There is a reference to an earthquake that devastated the city of Verona years before the play begins and carried off Juliet’s Nurse’s own child.

Kimberley says she wanted to bring recovering from tragedy out as a theme, telling us “I feel we can explore that without even saying the word Covid.”

So, the stage in designer Naomi Dawson’s set is dominated by an enormous crack. Because “the Earth’s that’s Nature’s mother, is (also) her tomb.” 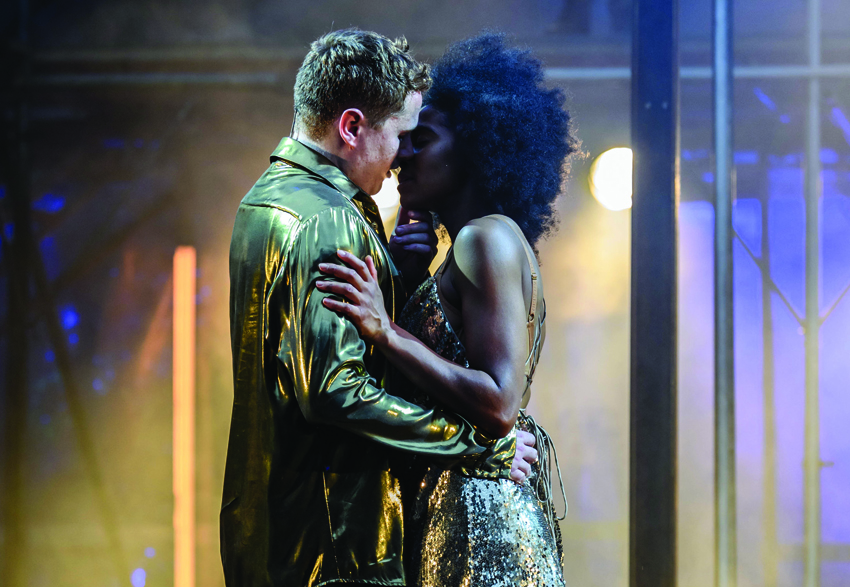 In the finale there are some impressive pyrotechnics which add to a sense of threatening events.

And the multi-layered scaffolding gives a sense of precarious reconstruction, while also allowing the performers to address the audience.

The set is hard on the performers. You feel for the actors having to run up and down stairs while simultaneously delivering Shakespearean dialogue, quite perfectly.

They will be fit by the end of the show.

The performances are universally excellent. Isabel Adomakoh Young is one of the best Juliets I’ve ever seen (and I’ve watched more than 20). She perfectly captures the youth and optimism of the role.

Likewise, the wonderful Emma Cunniffe is a triumph as her Nurse. Mixing comedy and tragedy in perfect measure.

While Michelle Fox gives us an energetic female Tybalt. A brave choice by this female director that actually pays off well.

There is quite a Celtic theme among the players.

Joel MacCormack is a thoughtful Romeo bringing something new to this well-worn role, while Cavan Clarke’s Mercutio is wonderfully threatening. Reminiscent of one of the hoodlums in A Clockwork Orange.

Novelty also comes from Peter Hamilton Dyer’s Friar. I have never before found him such a contemporary character.

And a special mention must be given to the wonderful cameo by Marc Zayat as Balthasar. He cleverly brings out the street fighter element that can sometimes be lost among all the men in tights.