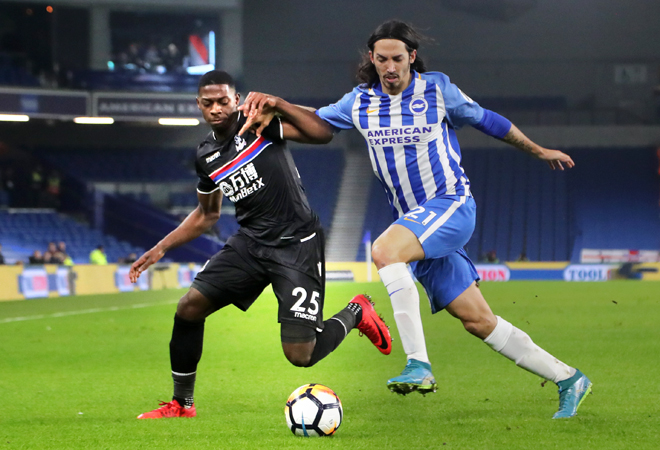 The confirmation of Sullay Kaikai’s loan move to Charlton Athletic had a supernatural touch – but the South Londoner is confident that his powers on the pitch should be enough to boost promotion prospects in SE7.

The 22-year-old Crystal Palace winger signed up for the final 16 League One matches of the campaign, although that figure will be added to if the Addicks make the play-offs.

Kaikai was red-hot the last time that he played at this level with 12 goals in 29 appearances for Shrewsbury Town in the 2015-16 season.

He will wear the number 11 shirt at The Valley and that led to Charlton riffing off the hit Netflix show Stranger Things – a nod to the character Eleven – when they announced his arrival in SE7.

“I’m a fan of the programme and when I saw that they did I thought it was quite cool,” said Kaikai. “I did get the heads up they were going to do that.

“I definitely believe I can do as well as I did at Shrewsbury. I believe in myself and back myself to go out there and make an impact. If possible I’ll be looking to make an even better impact.”

Not many have crossed the South London divide in recent years, with even loan deals a rarity.

Dany N’Guessan was loaned by Millwall in March 2012 and scored four times as Charlton won the League One title under Chris Powell.

Danny Butterfield played 12 times in the Championship for Charlton midway through the 2008-09 season.

“The most important thing is going there and showing what I can do – delivering for the club,” said Kaikai. “I’m not too fussed about anything else.

“This is the best move for me at the moment. I enjoy going on loans – but loans are very strategic. You are going on loan for a reason, not just for the sake of it. It’s to make myself better and try to compete at Crystal Palace.”

Kaikai moved up a level in terms of temporary deals when he joined Brentford last season, but he started in only six of his 18 outings. The last of his three goals there came when he struck a brace in the 2-2 draw with Cardiff on Boxing Day 2016.

He ended up back at Palace a month later.

“At the start it took a bit of time to find my feet at that level – the demands of the Championship made it a step up,” said Kaikai. “It was a lot quicker.

“In the latter stages of the loan I knew more what it was all about and I feel like my quality came out a bit more. I was feeling confident going into the second half of the season and go called back by Palace.

“In terms of playing time, of course Shrewsbury was the most enjoyable. But I’ve learned a lot from each one. At Brentford the coaching staff and fans were really good.”

Kaikai’s chances of making an impact at Palace have been limited – with their promotion to the Premier League ratcheting up the difficulty of making the jump from academy level.

He was recalled in the winter transfer window while in a rich vein of form at Shrewsbury – then Eagles boss Alan Pardew ready to give him a go with his squad hit by injuries – but a hamstring injury ruled him out. By the time he was fit again, the opportunity had gone.

“Palace had to be doubly sure on the extent of the injury before I played,” recalled Kaikai. “I had the scan and was then told it was a severe strain.

“The Premier League is the best league in the world. It is going to be hard for any young player to make an impact. You need experience and time to make mistakes and learn from them. With a run you kind of find your rhythm.

“There were teams interested in taking me on loan from the start of the season but the manager [Frank de Boer] made clear I was in his plans and he was going to involve me this season. Unfortunately he got sacked after four games.

“Then it was a period of adapting to the new manager. He needed time to get to know my capabilities and me as a person before he gave me a chances in the cup.”

Kaikai was a half-time change for the injured Andros Townsend in the 2-1 FA Cup defeat to Brighton in early January.

“Every minute I get to play is important,” he said. “It caught me a little by surprise, coming on as early as I did. But overall it was alright.

“I felt like I could’ve shown a bit more. Your natural game comes out a bit more when you are confident.”

Kaikai should get that game time under Charlton boss Karl Robinson, who has consistently played all four of his other loanees.

“He said he sees me playing on the left, behind the striker or as a nine,” said Kaikai. “He knows I can play anywhere across the frontline. It is not a problem for me if one week or for a few minutes I’m in another position.

“All the other players in my sort of position are able to rotate as well.

“Trying to win promotion is another one of the things that made me come to Charlton. After speaking to the manager he convinced me about everything. I spoke to a few other managers and someone in the Championship as well – Charlton just felt right.”