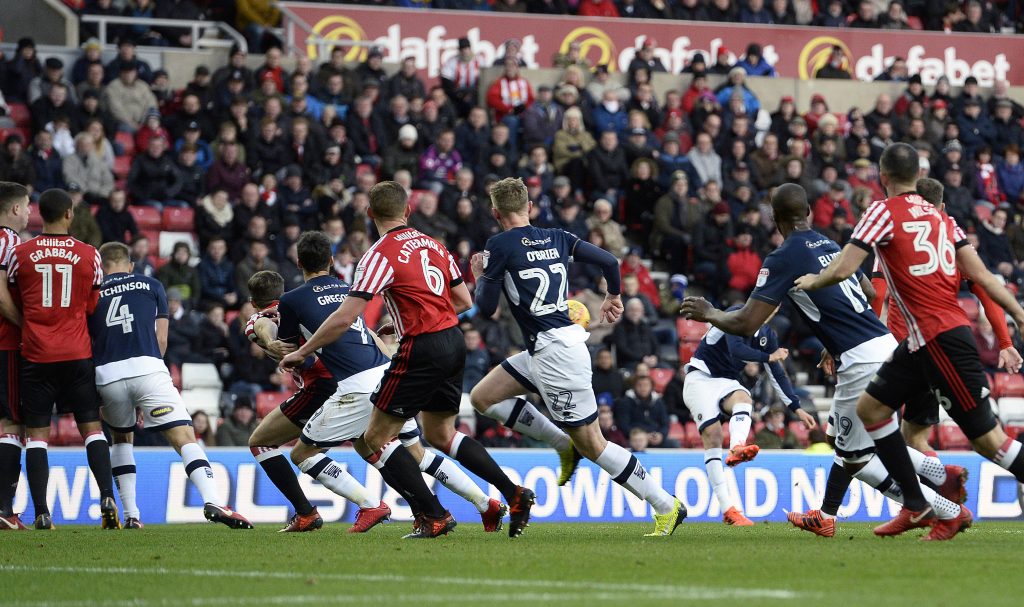 There are few who would argue that there is a more high-risk position on the field of play than that of a goalkeeper, writes Dan Barnes.

Human error is invariably never more emphatically punished than between the sticks and unfortunately for Millwall, their talented young stopper Jordan Archer had an afternoon to forget at the Stadium of Light.

His two howlers contributed to the Lions being held to a 2-2 draw by fallen giants Sunderland but the 24-year-old was able to glance in the direction of the opposite goal and see his rival custodian – the Black Cats’ Robbin Ruiter – enduring a similarly chastening day.

Ruiter twice made a pig’s ear of two accurate yet routine George Saville free-kicks and although Archer’s mistake let in an Adam Matthews’ cross in the opening minute of the second period, Lions manager Neil Harris asserted that he was pleased with a point in the North-East.

The Den chief showed his backing for Archer at the full-time whistle as he put a consoling arm around the goalkeeper, whose form this season has seen him called up to the senior Scotland squad.

“It wasn’t a day for goalkeepers – that’s my verdict,” said Harris.

“He’s been good for us this year and the boys will get around him and make sure he’s in a good frame of mind.”

There must be something foul in the air at Sunderland.

Rarely have two Championship goalkeepers both lost their composure at a vital moment – or make that moments – so spectacularly.

Unfortunately for Archer, he was the first stopper to be left wanting the ground to swallow him up.

He was probably feeling pretty happy with himself when he fingertipped a stinging strike from Republic of Ireland international Aiden McGeady around the post.

But from the resultant inswinging Bryan Oviedo corner, Archer found himself unsighted by team-mate Tom Elliott and made a hash of punching the ball to safety, inadvertently teeing up former Millwall man Lewis Grabban to slam home his ninth goal of the season.

It took just five minutes for Ruiter to take the spotlight from Archer.

Fresh from making his first Northern Ireland start in the pressure-cooker environment of his nation’s ultimately disappointing World Cup play-off showdown in Basel last week, Saville lined up his free-kick some five yards outside the Sunderland area.

His left-footed effort cleared the wall and bounced low, with Dutchman Ruiter primed for a routine catch but somehow the 30-year-old misjudged the ball’s flight and saw it comically rebound up into his body before squirming through his legs.

You’d think that when Saville tried his luck again from an almost identical angle, producing another accurate, yet far-from-devilish effort, that Ruiter would ensure that he covered himself in glory this time around.

No such luck – the Millwall man was able to wheel off and celebrate his sixth goal of the season after the Black Cats’ keeper produced another woeful attempted save, this time slapping the ball into the goal.

Even after the opportunity to compose himself at the break, Archer’s blushes wouldn’t be spared.

Matthews burst down the right flank in the first minute of the second period and as the delivery took an unexpected swerve inwards, the Millwall custodian totally lost his bearings, contriving to smack the ball into his own net to level things up.

Archer’s second mistake saw the Lions’ winless run stretch into a fourth game but that sequence pales in comparison to the embarrassing milestone Sunderland reached by way of Saturday’s draw.

The Black Cats appointed former Crystal Palace defender Chris Coleman as their new manager on Sunday. The newly-departed Wales chief was not at the Stadium of Light but was instead busy turning on Newport’s Christmas Lights.

He takes over a Sunderland side feeling far from festive as, following their stalemate with Millwall, they have become the first team in English history to go 20 successive home games in all competitions without a win.