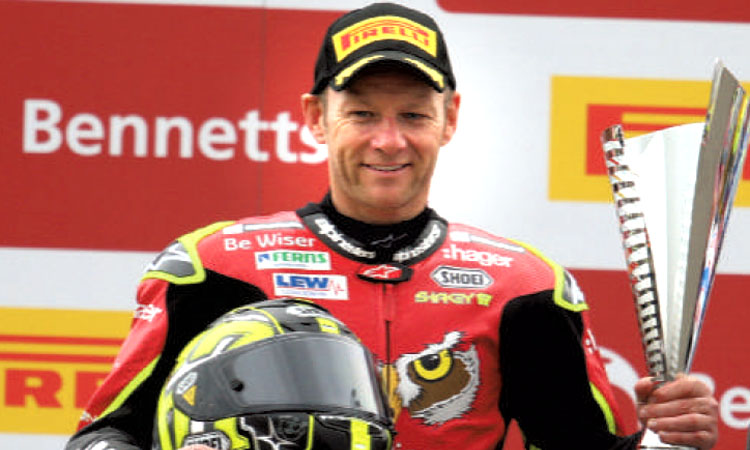 With severe weather forecast for Monday, race organisers brought race one forward to Sunday to make the most of the dry conditions.

Away from the lights and Shakey’s Ducati reared up, forcing him to back off and lose several places into the first corner.

Leon Haslam made the holeshot but was soon overtaken by Anvil Hire TAG Yamaha’s James Ellison and a few laps later by young gun Bradley Ray on the Buildbase Suzuki.

By the last lap the top three had closed up with Byrne looking like he had more tyre left than the other two and as Ellison lined up Ray for a pass into theMelbourne Loop, Shakey made his own move to snatch second place and hold on for one more corner to take his first podium of the year behind maiden race winner, Ray, with Ellison on the final step of the podium.

Championship rival, Haslam, salvaged useful points in ninth, while GinoRea on theOMGRacing Suzuki finished outside the points in 17th.

Heavy rain on theMonday caught many riders out in the warm-up, but a dry line had appeared on the track by the time race two was lining up.

Ray made the holeshot and pushed hard to stretch out a lead of over two seconds by the end of the first lap.

Ray built up too much of a lead to be caught and crossed the line as a two-time winner this year, over three seconds ahead of Haslam with Linfoot hanging on in third and despite a last gasp effort from Shakey, he crossed the line fifth, behind FS-3 Racing Kawasaki’s Danny Buchan.

Bradley Ray now leads the championship with a maximum 50 points from Byrne on 31, just ahead of Honda racing’s Dan Linfoot and Haslam on 29 and 27 respectively.

Rea currently lies in 18th place with a single point.

The opening two races have, as usual, proved anything can happen in British Superbikes.

Shakey stated he wants to get to 100 wins in BSB and he definitely knows he has a fight on his hands now for that to happen.

Seasoned riders have fallen and young-gun title rivals have emerged and the only thing you can be sure of is it will happen all again at round two at Brands Hatch on April 13-15.