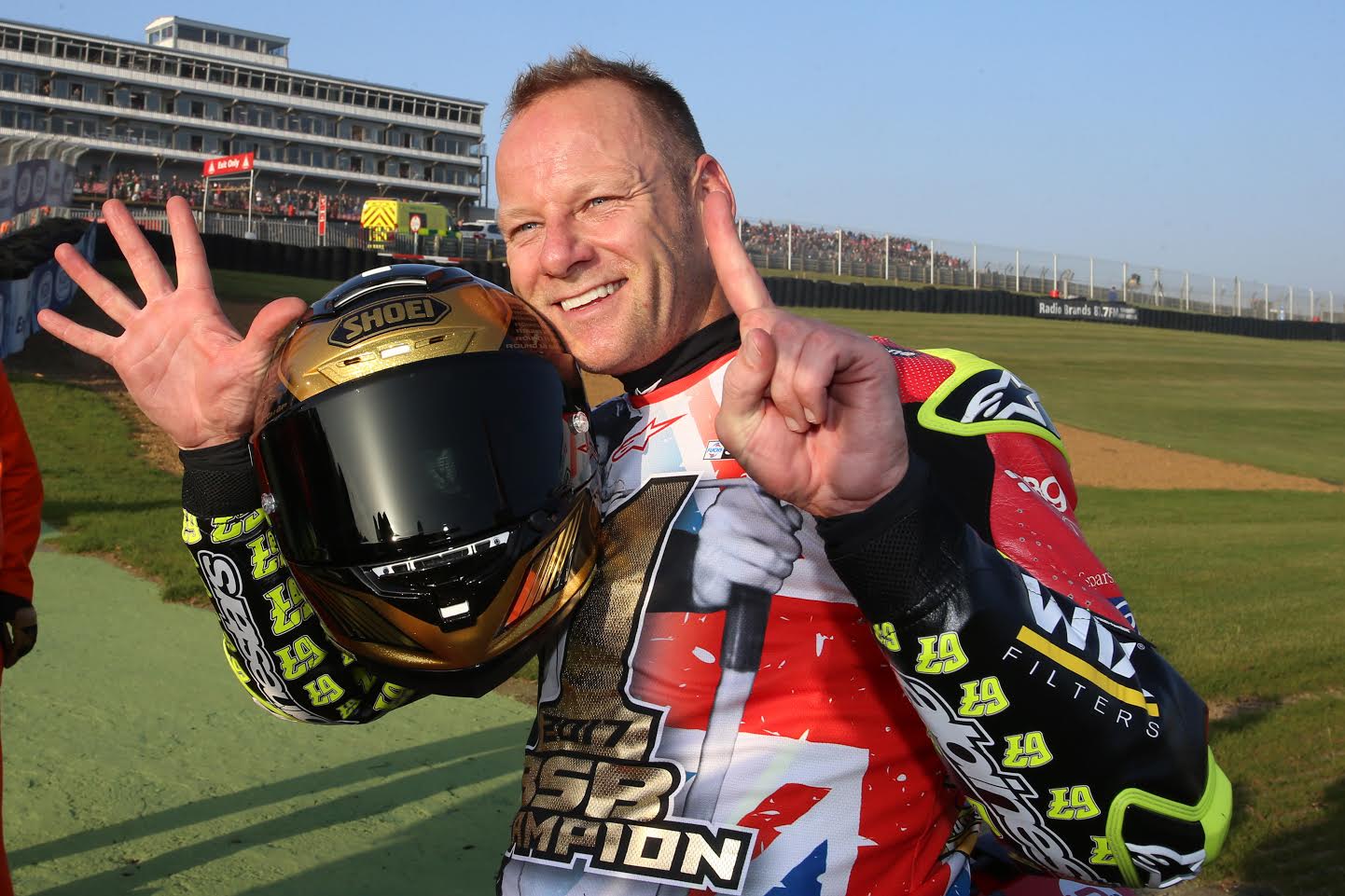 Lambeth’s Shane “Shakey” Byrne pulled off a move worthy of a Hollywood blockbuster to snatch victory from the jaws of defeat as he clawed back a huge points gap to retain his British Superbike title, writes Giles Spencer.

The 40-year-old delivered on a nail-biting weekend at Brands Hatch to break his own record by winning the championship for a sixth time.

Byrne was 33 points behind rival Leon Haslam going into the title-deciding triple-header on the Brands Hatch Grand Prix circuit and knew he would have to win all three races and hope some fortune went his way.

The Be Wiser Ducati man topped Friday’s two free practice sessions and continued his form into Saturday’s final practice session where he posted an incredible 1:24.673 lap, some four-tenths faster than his nearest competitor. It wasn’t the best start in qualifying for Byrne as he only got one lap in before the red flags came out after Moto Rapido Ducati rider and ex-MotoGP star, John Hopkins, came down at Paddock Hill Bend, requiring medical treatment for suspected broken bones in his back and two fractured knees.

In the shortened restart Byrne wasted no time getting up to speed, and set the fastest ever two-wheeled lap of the Brands GP circuit at 1:24.163. More drama unfolded as favourite Haslam crashed out in the final stages but he had done enough to start at the head of the second row in fourth.

In an action-packed first race on Saturday – which saw red flags come out after only two laps as five riders ended up in the gravel at Clearways when Dan Linfoot’s Honda Racing machine suffered a mechanical problem and spilled fluid on the track – Byrne took the win by nearly two seconds from Tyco BMW’s Christian Iddon.

The win kept Byrne’s title hopes alive and he was further helped by Haslam finishing fourth, as he just held off the attentions of former team-mate James Ellison and Jason O’Halloran. The gap had been reduced to 21 points with 50 left on the table.

Byrne said: “The first start I got caught out by the lights. I looked down, looked up and the lights went out – that was my start blown.

“The second start I had settled in and it came together quite well. I just tried to hit my markers and keep my lap times consistent. Towards the end of the race I managed to lower my lap times a little bit and finish the race really strong.”

The first of the two Sunday races blew the title race wide open as Byrne won and Haslam had a disaster, finishing 10th place following clutch problems. A quick-fire Brookes led off the line with Haslam looking good in second and – more importantly for the championship – ahead of Byrne. It only took until lap two for Byrne to dive under Haslam at Druids hairpin and set off after Brookes.

Byrne made easy work of getting into the lead with Brookes unable to replicate the pace he showed on the Saturday despite being the quickest in morning warm-up, he dropped out of the top three. Byrne had cut Haslam’s lead from 33 points at the beginning of the weekend to just two with one more race to go.

“I thought 33 points against Haslam was going to be really difficult to overhaul,” said Byrne. “It’s my home track and I just wanted to enjoy racing.

“I’ve worked so hard this year and because of the way things are going, it’s been really difficult to keep putting in 110 per cent and getting a bad result. I’ve dreamt about being a racer since I was a kid and never wanted to do anything else – here I am getting paid to do it.”

Byrne has won 19 BSB races on this track, clearly marking him as the “King of Brands”. With packed grandstands for the final race, it simply boiled down to Byrne and Haslam’s finishing positions. Brookes – the 2015 winner – had a mathematical chance but was trailing by 22 points. Eight laps in and Haslam crashed out at high speed in dramatic fashion when his front brakes failed, breaking his wrist, thumb and ankle. As the flag came out, Brookes took the final win but Byrne had done enough in eighth place to win the championship by three points.

He said: “Over the last four or five rounds we’ve had a rough time, sometimes through no fault of our own. This has been my worst season overall. I think I’ve won seven races. I’ve not won that few since 2002. After topping the timing sessions and pulling back 14 points on Saturday I actually dreamt that night about this moment.

“To defend the championship was one of the biggest things on my bucket list and we did it, thanks to my team, Ducati and my sponsors.

“My daughter told me this morning ‘daddy, if you win me the championship, I’ll be very happy with you’.

“When your six-year-old tells you that first thing in the morning, you’ve got no option, have you? To go into the winter now as champion feels absolutely amazing.”