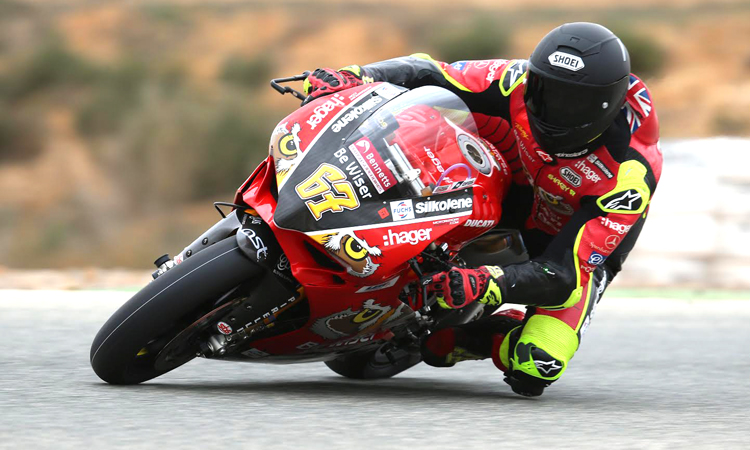 Lambeth-born Shane “Shakey” Byrne will be hoping to make the best start to his title defence by winning the opening two rounds of the 2018 Bennetts British Superbike Championship this Easter weekend at Donington Park in Leicestershire.

Byrne, the oldest rider on the grid at 41, posted the second quickest time in the final pre-season test at a chilly Donington Park.

It will be a brave man to bet against the Be Wiser Ducati racer but if he wants to lift title number seven then his work will be cut out with Leon Haslam, last year’s third-place finisher and pre-season favourite, topping the timesheets by a whopping 1.179 seconds.

With tricky conditions on track it maybe doesn’t give a true representation as to riders true pace although it does show the JG Speedfit Kawasaki man is back up to full speed and fitness after his horrific crash during the final round of the 2017  Championship at Brands Hatch in Kent.

Haslam is favourite to challenge Byrne for the number one spot if he can stay injury free. But several other riders are going to be a serious threat – last year’s top three were separated by six points and I’m sure it’ll be just as close this year.

The 2015 BSB champion Josh Brookes, second in last years championship, will once again be at the sharp end, especially as the Australian has switched to the factory-backed bike in the McAMS Yamaha squad.

Honda Racing having made big improvements over the winter and hope their riders Dan Linfoot and Jason O’Hallaron can translate these into more consistent results. They are definitely contenders for race wins this season.

Haslam’s team mate Luke Mossey could also be in the mix if he can have a bit more luck this year, having led the way after four rounds last season only to be cut short by injury.

Byrne’s Be Wiser Ducati team-mate Glen Irwin has gone very well in the final test after finishing third, just behind Shakey and will be hoping for a strong year after having a very up and down season in 2017.

Other regulars to look out for include RAF Regular & Reserves Kawasaki rider Jake Dixon, who took a stunning double win at Knockhill last year, and Smiths Racing BMW rider Peter Hickman, who recorded a win and a second place at Thruxton. Keep an eye out too for Tyco BMW ride Christian Iddon, who always makes a fast start to the campaign.

Michael Laverty, James Ellison, Danny Buchan, Tommy Bridewell and Bradley Ray will also be pushing the guys at the front. Anvil Hire TAG Yamaha rider Ellison could be a real threat at the front, if only he wasn’t one of the most unlucky riders in BSB. One of the most exciting new riders will be London rider Gino Rea, who comes to the series for the first time after serving his time in the World Supersport and Moto2 World Championships, taking a win in WSS and a well deserved podium in Moto2 along the way.

Rea will be riding for the new OMG Racing Suzuki squad and is already worrying the established names with the fourth quickest time in the Donington test. Suzuki will be desperate for some success having not lifted the crown since John Reynolds back in 2004. Can Rea be the man to do it?

Other new riders include Tarron MacKenzie, 2016 British Supersport champion and youngest son of three times BSB champ Niall. He will join his brother Taylor on the grid to try and put the MacKenzie name back at the top.

Frenchman Sylvain Barrier, two-time European Superstock 1000 Champion has taken the second Smiths Racing BMW ride alongside Hickman, although will have to prove himself in arguably the best domestic superbike championship in the world. The last European to lift the title was Spaniard Gregorio Lavilla in 2005.

Northern Ireland’s Carl Phillips may seem a strange signing, making the step up from only one season in Superstock 1000 where he finished 14th in 2017, to ride for the Gearlink Kawasaki squad and although one of the best of the new riders in the Donington test, is yet to worry the front runners.

With at least 12 riders capable of winning this year – and an influx of new blood into the series – 2018 promises to provide nail-biting excitement right down to the wire.