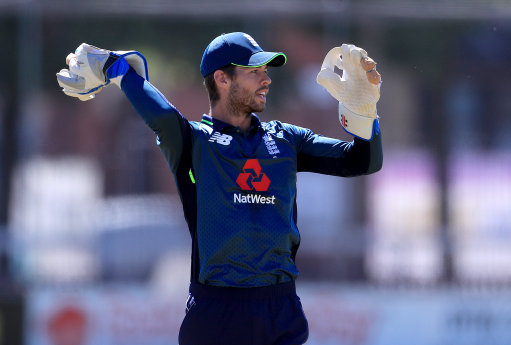 More Sport
13 August 201814 August 2018 Toby Porter 0 Comments
BY MARCUS HOOK
Ben Foakes admits Surrey need something approaching a miracle if they are to quality for Vitality Blast quarter-finals.
This is despite the Oval outfit having comfortably the best net run rate (one-day cricket’s equivalent to goal difference) in the 20-over competition.
Speaking after Sunday’s five-run defeat at Bristol to this year’s surprise package Gloucestershire, Foakes, who hit a 39-ball 59, said: “We’re struggling to make the last eight and are definitely depending on other results going our way. We just have to try and win our last two games and see what happens.”
Defending a modest total of 174-6, Gloucestershire needed to take early wickets and did so, despite not having to worry about Surrey’s star man Aaron Finch, who has had to return to Australia due to a family bereavement.
Jason Roy lofted David Payne to deep square leg for 15, Rory Burns shuffled in front of a straight one from the same bowler and Will Jacks (25) top-edged a pull shot behind off Kieran Noema-Barnett.
When Nic Maddinson holed out to deep mid-wicket off the bowling of Benny Howell, Surrey were 66 for 4 in the ninth over, but Foakes in tandem with Rikki Clarke (35) redressed the balance, plundering 31 runs from the ninth and tenth overs, at which point the visitors needed 78 off the last ten.
Howell had Clarke held at long-off and then bowled Freddie van den Bergh with 30 needed off four overs, when Payne returned to removed key man Foakes in the 19th over the complexion of the game altered completely.
“I thought we had a good chance when Rikki Clarke and I were in at about halfway,” said Foakes. “But conditions were not the easiest to bat and Gloucestershire bowled pretty well. We were never quite far enough ahead in the game to have it in our control.
“We had it down to about a run a ball, but I got out at a crucial time and we threw it away a bit. The wicket was difficult, but the short boundary made 175 very gettable total. We just let it slip from our grasp.”
It wasn’t Surrey’s only west country disappointment – two days earlier they lost to Somerset at Taunton. Peter Trego (70) and Corey Anderson (53) led the way as the Cidermen cemented their position at the top of the South Group; recovering from a shaky start to reach 177-6 with five balls to spare.
The visitors had earlier posted 176-8, thanks largely to teenager Will Jacks, who smacked 53 off 31 balls.
Jacks said: ” I thoroughly enjoyed my maiden T20 half-century in what was my first extended bat in the competition, but we are disappointed as a team and now have to look to win all of our remaining group matches.
“We didn’t bat as well as we can and 176 was definitely a below par total at Taunton when we were looking for more like 200.
“There were some positives, such as the way we bowled and fielded to restrict them in the powerplay, but credit Somerset for the way they batted after that.”
AN OVER OF STATS
Ball 1 – The last week has seen two instances of a fielder taking three catches in a T20 innings for Surrey – Rikki Clarke against Somerset at Taunton and Jason Roy against Gloucestershire at Bristol. Only one man has ever taken more for the Oval outfit – Grant Elliott, who held on four times against Kent in 2009.
Ball 2 – Jason Roy, with 49, heads the list of the most T20 catches in a career for Surrey.
Ball 3 – Aaron Finch has moved up to tenth in the all-time list of leading T20 run-makers. The Australian’s tally now stands at 7,429 runs at an average of 36.59.
Ball 4 – Surrey have been responsible for three of the nine largest totals in this year’s Vitality Blast, including the highest – their 250-6 in the washout against Kent at Canterbury.
Ball 5 – The South Group has seen disproportionately more weather-affected games in the Vitality Blast. So far, just two (or 3.5%) North Group fixtures have succumbed to elements, compared with nine in the South (16.7%).
Ball 6 – No more than three of the Vitality Blast quarter-finalists – and should Surrey fail to progress to the last eight, only two – are based at grounds earmarked to stage the ECB’s new “flagship” 100-ball competition The Hundred in 2020.