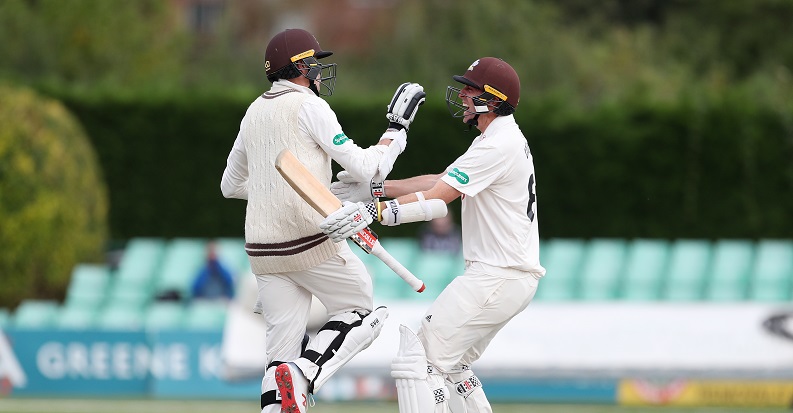 More Sport
28 September 2018 Sports Reporter 0 Comments
BY MARCUS HOOK The first indication that Surrey would be the team to catch in the County Championship came in game four, against a strong Yorkshire side at the Oval, following draws away to Lancashire and at home to Worcestershire.
Aboard Yorkshire’s team coach were the likes of Jonny Bairstow and Joe Root, not to mention India’s Cheteshwar Pujara, who, like Root, had a Test batting average pushing 50.
But the best batsman on show proved to be 20-year-old Ollie Pope, whose unbeaten 158, abetted by Rikki Clarke at number eight, helped Surrey post 414.
Sam Curran then went to work with the ball, taking 6-54 and 4-47, including the wicket of the England captain, to help wrap up an innings victory.
By the time the championship campaign resumed a month later Morne Morkel was over the side strain that had sidelined him during the opening weeks.
At Hampshire, Surrey lost two wickets in the first over, yet still ended up winning by an innings thanks to a superb 151 from Rory Burns and a masterclass in outswing bowling from Clarke; who bagged figures of 5-29 in the hosts’ first dig.
When that was followed by Surrey’s first championship victory at Guildford since 2002, even the most pessimistic sections of the faithful were starting to believe; not least because it was Somerset – the early championship pace-setters – who were on the receiving end.
Once again, Pope starred with the bat – making 117 in front of the on-looking Ed Smith, England’s new chairman of selectors.

Six weeks later, Pope was making his international debut alongside Surrey team-mate Sam Curran (whose 63 in the first Test against India had turned certain defeat for the hosts into a 31-run victory).

But the game hinged on 23 deliveries from Ryan Patel, who sent six Somerset batsmen packing as 169-4 rapidly became 180 all out.
At the second time of asking, only Hildreth and Gregory showed any inclination to withstand Morkel and Surrey duly notched up a third successive innings victory.
The title race was all but decided by the end of June when the Oval outfit scored a come-from-behind victory at Scarborough to register a home and away double over Yorkshire.
Normal service resumed at Trent Bridge where Burns (153) was in the runs again, as was Clarke – who fashioned his first championship hundred in six years – and where Nottinghamshire became the fourth side to lose to Surrey by an innings.
So frail was their batting in the face of Morkel (who took 4-60 and 5-60), Notts appeared to make it their mission there and then to take advantage of county cricket’s lack of a football style transfer system and recruit, heavily.
Lancashire were seemingly the next lamb for Surrey to slaughter. The red roses had been battling relegation for much of the summer – not that you would know it, for they came within a whisker of causing an upset at the Oval.
Had it not been for Morkel’s 6-57 on the final day, they would have. But another factor was the presence of Will Jacks at short leg.

Jacks’ catch there to decide the contest garnered more votes for the Surrey Supporters’ Club’s moment of the season, than the instant the championship was secured at Worcester. More on that later.

In the meantime, Notts – even with a few new faces – were put to the sword, once more, when they came to the Oval.
They travelled back up the M1 a day early, having become the first side to have been beaten by Surrey, by an innings, home and away in the same season, since… well, Notts, back in 2003.
Mark Stoneman had been the architect – his 144 serving as a reminder that he is still one of the best opening batsmen in the country.
But to win games you also need to bowl sides out twice.

Having Tom Curran back from injury proved crucial – not just against Notts, but also in the next match against Essex at Chelmsford, where the ball beat the outside edge with such frequency on the first day it was a miracle that Surrey were still batting well into day two.

With Lancashire holding Somerset to a tie, the realisation was that the title could be decided with two matches to spare.
And so Surrey travelled to Worcester, as did a flock of their supporters; many of whom had withdrawn their request to take leave for the Somerset rematch in favour of a trip to New Road.
Their loyalty was repaid with a hard-fought three-wicket victory – that owed much to Burns’ 122 and 66 – and a team photograph with the Surrey players that adorned many a newspaper back page the following morning.
In many ways it was appropriate that the man who hit the winning runs, and, in so doing, made certain of the title, was Morkel.
Had Worcestershire been batting last instead of Surrey then he would, in all probability, have rounded off proceedings with ball.
A week later the Oval outfit’s winning run was brought to an end; not by Somerset, but by high overnight wind, which lifted the covers and exposed the pitch at Taunton to the elements.
The game seemed to be there for Surrey’s taking. Still, their nine consecutive victories was the most by any team in the County Championship since… well, Surrey, back in 1957.
Being skittled for 67, Surrey’s lowest first-class total since 1986, and their lowest at the Oval since 1962, wasn’t meant to be how the final chapter was meant to be played out.
Essex’s Tom Westley (134) and Simon Harmer (102 not out) rubbing their hosts’ noses in the dirt even more wasn’t in the script either.

But it mattered not that Surrey had conceded only their third and fourth hundreds of the campaign, for they were the champions and, if Division One table tells the true story, by some distance.

They also did it the right way – in the 12 games it took them to clinch the County Championship for the first time in 16 years, 61 per cent of their runs and 72 per cent of wickets taken came courtesy of players who started out in the Surrey academy.
Whether the homegrowns can match that level of production in 2019 remains to be seen, for the simple reason that Surrey are now producing England cricketers again.
Tom and Sam Curran, along with Jason Roy, will be jetting off to Sri Lanka this weekend, with the rest of England’s limited-overs squad.

What bearing did it have that the Currans sat out Surrey’s final match of the season, on the instructions of the England management?

In November, Sam will be joined by Rory Burns and Ollie Pope when the plane carrying England’s Test squad touches down.
Surrey have shown that you can win things largely with kids. The hope now is that Burns can prove his doubters wrong and fill Alastair Cook’s shoes at the top of the order for England.
If he does, no one will have deserved it more.