A teenage killer publicly brandished a knife, demanded money from his victim, stabbed him, snatched his Rolex watch and took a photo of himself wearing it that night.

The 17-year-old was found guilty on Tuesday, 4 June of murdering Aron Warren – after police discovered shoes with Aron’s blood on it when they raided the killer’s home days later.
The teenager from Plumstead was also found guilty, following a trial at the Old Bailey, of possessing a knife in public.

The murderer stabbed Aron twice at his home in Prior Street, Greenwich, at 9.35pm on 8 December 2018, before snatching possessions from his home, including two knives and the watch.

The Met’s Homicide and Major Crime Command tracked down witnesses who identified the suspect, who was 16 at the time of the murder, as being outside the victim’s third story flat at least five minutes before the murder.

He showed off a large knife – later established as being used to murder Aron – and threatened that he was going to “see Irish” – the victim was of Irish descent.

A friend in Aron’s flat was a witness to the horrifying killing. He told police the suspect entered Aron’s flat and there was only a brief conversation. The thug then stabbed the victim twice in the chest and the arm, then asked him “where’s the money?”

He got no response so turned to the witness to ask the same question. The witness began frantically searching the flat, for money and anything of value which the suspect grabbed before leaving.

Paramedics called at 9.41pm found the witness conducting heart massage, but Aron was pronounced dead at the scene at 10.20pm.

Officers found the stolen property, through a search warrant carried out at the suspect’s home address. Forensic work identified the victim’s blood on footwear belonging to the defendant while CCTV placed him at the scene before and after the murder took place.

Recovered from the defendant’s home address was a photo taken on his iPad of him posing with the watch belonging to the victim – this was taken only five hours after the murder. 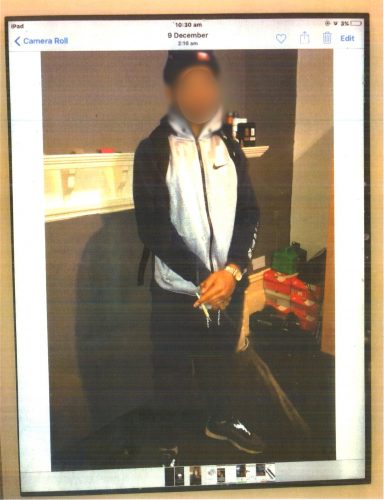 During the trial the jury were shown CCTV of the defendant assaulting prison officers and police custody officers.

Lorraine Donovan, Aron’s mum said, “I’d like to express my appreciation to the judge, the barristers and to all the court for the respect they have given to my son. Also the police team; they have recognised Aron as a person and not just a case and for that I am very grateful.

“As a mother you would never expect to be burying your son, let alone, standing in a court talking about his life.

“Aron had a good heart and I’d often say to him when he was going out with his friends, don’t be foolish with your money. He would say, “Ma, I can’t leave one person out just because they didn’t have any money”. That’s the type of person Aron was. He would never want to see anyone without.

“The future was so bright for him, he had the world at his feet and it was just taken away from him and me.”

DI Brett Hagen, of the Homicide and Major Crime team, said: “We are extremely glad that the trial has led to guilty verdicts for this defendant, following Aron’s violent and premature death.

“It remains shocking that the attacker was only a 16-year-old teenager when he committed murder. Despite his age, he acted with extreme violence and certainly without conscience or morality even to the extent of flaunting the victim’s Rolex watch less than five hours after the murder.

“He has been brought to justice now which we hope can be of some reassurance to Aron’s grieving family and friends.”

The defendant was not found guilty of robbery.