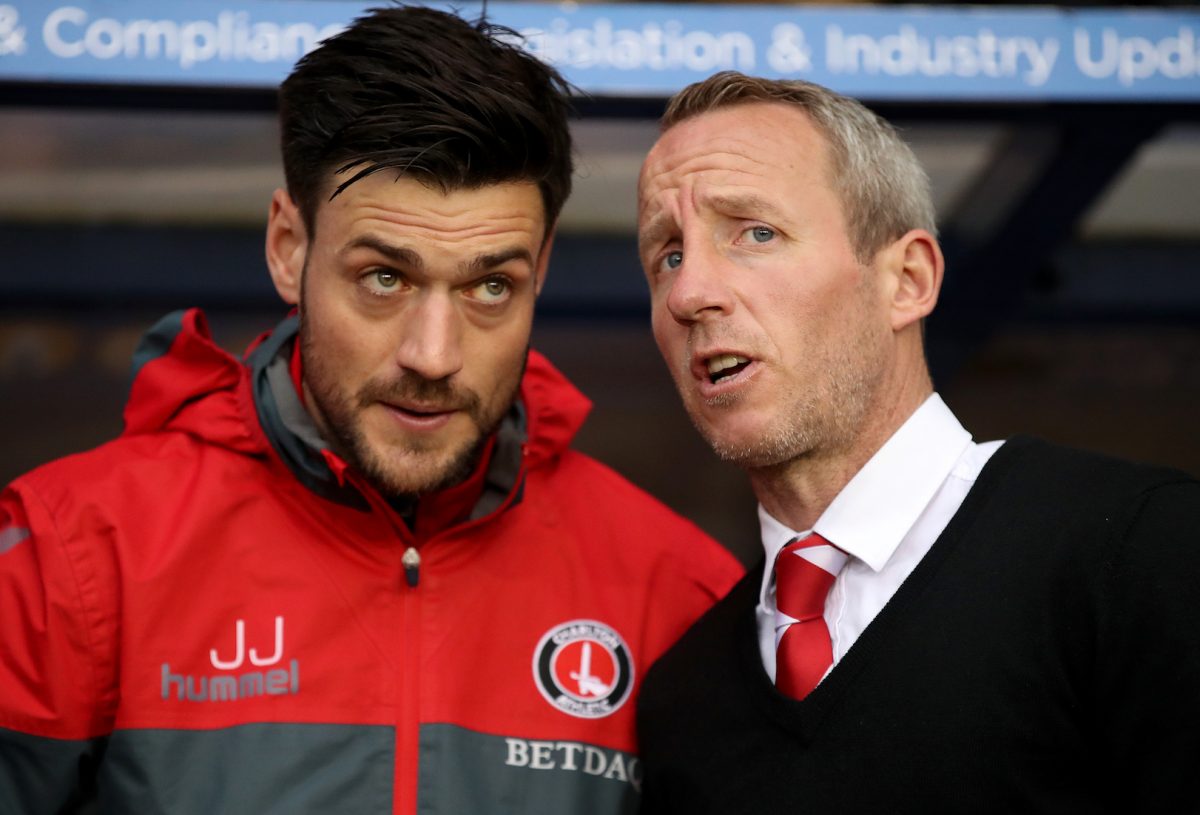 Lee Bowyer has become the most successful Charlton Athletic manager ever in terms of their first 10 games in charge – and that is even before he reaches  double digits at Rochdale tomorrow.

The caretaker boss has six wins, one draw and two defeats since successfully stepping up following Karl Robinson’s exit.

And Saturday’s edgy 1-0 victory over Blackburn Rovers has bettered Bob Peeters with a match to go.

The way that things collapsed under Peeters is proof that good starts don’t always count for much, but Bowyer has transformed the Addicks’ lagging play-off prospects.

At times like these, you wonder what has been the secret of his success. And Johnnie Jackson, who has assisted the former Charlton, Leeds and West Ham midfielder is well-placed to comment.

“What Bow is really good at is putting that confidence into the lads, making them believe they are good players and on our day we are better than anyone in the league.

“That is a message we have tried to drive home.

“Little tweaks have helped, going with two forwards has made a difference – it allows us to press a little bit higher. The pressure we are putting teams under from the start has been evidently different, we’ve worked a lot on that on the training pitch.

“The lads at the back have been immense, I’ve got to say. Jason Pearce has been a collosus. When he first came back into the side he hadn’t played for a long, long time and he took a while to get back to his level. Since he has been fully fit it makes such a difference to the side and the back lads.

“Patrick Bauer plays better when Pearcey is alongside him, and so does everyone else.

“I do a lot of the defensive stuff in training with them and it is great for me to have someone in the side who you know is going to take it on board and implement it on the pitch, to make sure everyone is doing what they should be doing.

“I have singled out one player but they have all stood up in the last six weeks, all raised their level. We’ve had less injuries and there is a lot of competition for places. The lads know if they are not at it, even in training, they won’t play. Everyone’s standards have just stepped up a notch.”

Jackson also touches on the positive reaction to the promotion of him and Bowyer after Robinson opted to walk out.

The Liverpudlian had plenty of critics in the Addicks fanbase and The Valley had become a negative, impatient and difficult backdrop to home matches.

“There has been an upturn in positivity in the support since me and Bow stepped in,” said Jackson. “It has really, really helped that they’ve got right behind us.

“From Plymouth, our first game, you could tell there was a different vibe in the atmosphere at the stadium which culminated in Saturday – that’s the best it has been in absolute years. And that was on the back of Pompey, which is one of the best aways I can remember.

“The lads are thriving off that as well.

“But it’s hard to pinpoint one thing. We have not done anything drastic or too dramatic, it was just fine-tuning a few things. It is working at the moment. The boys deserve credit, they have done everything asked of them and leaving everything out on the pitch.”

The current three-game winning streak has not often been pretty. Saturday was a case of squeaking home past a Blackburn side who hit the woodwork and found Ben Amos in defiant mood.

“Ben has been brilliant and improved as the season has gone on,” said Jackson. “You have to praise Lee Turner, our goalkeeping coach, as well for that.

“He is looking so comfortable with his game and has got better and better. He is confident, looks after himself like a model pro.

“He is the best goalkeeper in the league, he just gets you out of trouble time and time again.

“We’ve got the two strikers trying to stop attacks at source, a midfield who have been unbelievable in their discipline, workrate and shape and then you need to get through the defensive boys. That is three units before you need to beat Ben Amos, and that is proving very difficult to do.

“When it gets to that stage you are asking your goalie to try and pull you out of trouble and he does it. There were three or four unbelievable saves against Blackburn and that’s what you need if you are going to grind out a 1-0.”

Bowyer has still not declared an interest in the role beyond the end of this month.

The wrong result on Saturday could bring an early end to the campaign. The prolonged takeover talks mean that futures are in limbo.

“Honestly we haven’t spoken about it at all,” said Jackson. “It’s out of our control, all we can do is effect the team and results, that’s all we are worried about.

“We were told it was short-term and that is how we have gone about it. We have focused on the next game or next training session – we’ve been thorough in that regard.

“There hasn’t been any time for think about the future. We’ve had so many games it would just be a waste of our energy and resources to worry about it. Maybe come the end of the season we’ll sit down and have a chat about it.

“We haven’t been told what is going to happen. We are not updated daily on the takeover. I don’t ask and I’m pretty sure Bow doesn’t.”