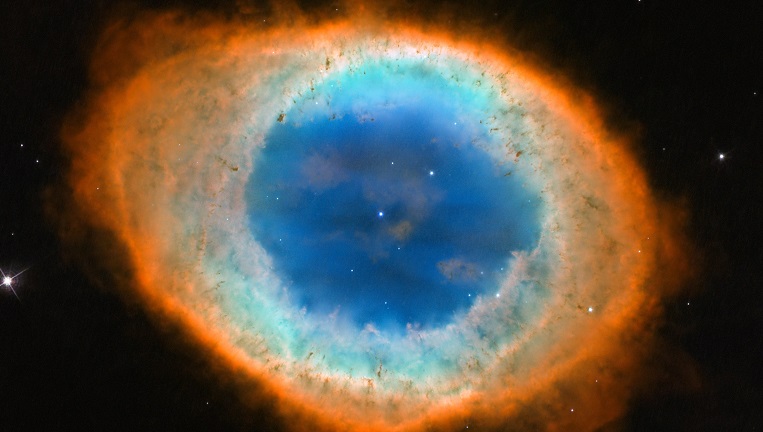 by Dr Gregory Brown
Astronomer at the Royal Observatory, Greenwich

Our night sky is filled with wonderful sights on display this August, with the summer’s pantheon of planets continuing to be one of the best.

While Mercury has passed too close to the sun to be easily visible, Venus is still an easy spot, bright and low down in the west just after sunset.

Jupiter, too, is easy to see, but the time to see it this year is now passing, as it sets earlier and earlier each night.

Through a small telescope, you might just be able to spot the four largest of its 79 known moons, the discovery of 12 more having been announced only last month.

Closer to midnight, Saturn, the ringed planet, and Mars are clearly visible.

On the latter, near planet-wide dust storms are currently placing NASA’s Opportunity rover in danger, with scientists hoping they will shortly subside.

Farther afield, those in possession of a small telescope should take the chance to see the Ring Nebula (pictured above) in the constellation of Lyra, almost directly overhead throughout the month.

This faint fuzzy ring is the result of a small star that has quietly pushed off the bulk of its weight, leaving a tiny Earth-sized superhot core known as a white dwarf at its centre.

Observers of this object are seeing the eventual fate of our own Sun in five or six billion years’ time.

However, the grandest sight this month has to be the Perseid meteor shower.

One of the strongest and most spectacular showers of the year, it peaks around the night of August 12, when up to 100 meteors per hour will be visible.

The best time to view them is in the hours just after midnight. Try to fill your view with as much of the sky as possible and then simply wait.

With good weather and a bit of luck, you may be able to spot a spectacular fireball, a meteor bright enough to rival Venus.

EVENTS AT THE ROYAL OBSERVATORY:

Astronomy and Islam:
Astronavigation In this special Sky Tonight show, held before the predicted sighting of the next New Crescent Moon, a Royal Observatory Greenwich astronomer will guide you through the steps to observe this phase, discuss the difficulties in defining a first sighting, and will provide a general overview of the sky this month. The astronomer will also highlight key story from the history of Islamic astronomy.
Date: August 4 – Times: 10am-10.45pm
Venue: Peter Harrison Planetarium, Royal Observatory Greenwich
Admission: £8 adult/£7.20 student or senior/£6.40 child Age: 11+

Attack the Block (2011)
John Boyega and Jodie Whittaker star in this instant cult classic written and directed by Joe Cornish. After crash landing in a South London estate, vicious and near-invisible creatures from space stalk the residents. However they defend their turf against extraterrestrial invaders through whatever means they can. Join a Royal Observatory astronomer after the film, as they delve into the science behind the fiction. Drinks and confectionary will be available at the ticket desk before the film starts.
Date: August 18 – Times: 6.30pm-8.30pm
Venue: Peter Harrison Planetarium, Royal Observatory Greenwich
Admission: £10.30 adult/£9.30 student or senior/£8.20 child Age: 15+

Great Equatorial Encounter
Join a Royal observatory astronomer at the Great Equatorial Telescope to find out more about this astounding 1893 Victorian instrument, the people who used it and the science it was used for. This visit includes telescope footage and a virtual reality experience to simulate elements of a night-time observing session at the Royal Observatory.
Date: August 2 and 16 –  Times: 12.30pm, 1.10pm, 1.50pm, 2.30pm
Venue: Great Equatorial Telescope Dome, Royal Observatory Greenwich
Admission: £6 adult£5.40 student or senior/£4.80 child Age: 11+